The Wesleyan Student Assembly introduced an amendment to provide a stipend for members on work-study. 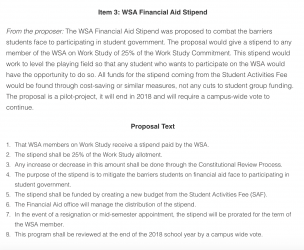 This week, as part of the annual constitutional review, the Wesleyan Student Assembly (WSA) introduced an amendment that would provide a stipend for assembly members with work-study. The stipend will cover 25 percent of the work-study commitment, or $343.75 out of a total of $1,375. It will be a flat wage regardless of a student’s position in the WSA.

The amendment is intended to increase the number of low-income and first-generation students on the assembly in response to the February “Shut. It. Down.” protests. The protests claimed the WSA was a classist institution in the wake of a hostile meeting that led to several low-income students leaving the room in tears.

Grant Tanenbaum ’15, 2014-2015 president of the WSA and the main architect of the amendment, spoke to the motivation behind the proposed stipend.

“For a long time…I’ve noticed that there’s definitely been a problem on the WSA of retaining members, getting members to run, [particularly] students on financial aid,” Tanenbaum said. “I realized the biggest commodity we have on campus is time…. I wanted to think of a way that I could create time for students, create an opportunity for them to join the WSA and participate, without them having to lose out on their academics or jobs they need to do…to fulfill their work-study commitment.”

Sadasia McCutchen ’17, sitting WSA coordinator and one of the leaders of the February protests, commented on the stipend proposal, saying that it addressed an important issue in the WSA.

Tanenbaum commented on taking the proposal to the student body at large rather than keeping the decision-making process within the confines of the WSA.

Views on the stipend vary. The proposal has attracted criticism from various perspectives, including efficacy and legality.

Aidan Martinez ’17, one of the leaders of the February protests and incoming WSA vice president, argued that the amendment is not addressing a larger problem with the assembly.

“The stipend is not a solution to the long-standing problem that is low retention rates of underprivileged students,” Martinez wrote. “Rather, it is a Band-Aid that I do not think is large enough to contain the problem, and will eventually give out. While I support the three-year testing trial of the stipend, and hope that it will increase interest among otherwise disinterested community members, I will also be seeking out other ways to bring more people into the room.”

University President Michael Roth spoke to the importance of easing time-related pressures for work-study students, but the expressed concern at seemingly encouraging certain activities over others.

“Trying to steer [students] to specific kinds of activities does concern me a little bit,” Roth said in an interview with The Argus. “So, the WSA, they give a stipend, but not The Argus? Not the ’92 Theater?… I have students coming to see me [saying], ‘I just can’t do everything, so I’m going to drop a course,’ or ‘I’m going to drop this activity.’ I think our role should be to take some…general pressure off, so people have more choices, [but] not to try to engineer them to move toward one thing or another. I think if the WSA is attractive enough for students from underrepresented groups, they’ll choose that as something they can do with their time.”

Martinez also stated that the amendment fails to address a cultural problem with regard to the perception of lower-income students.

“In my experience, low-income students [have quit not] only because they need to make money, but also because they don’t feel welcome in the room,” Martinez wrote. “Money won’t fix that.”

Tanenbaum acknowledged various criticisms, but he reiterated the purpose of the stipend.

“I think reasonable people can disagree about this,” Tanenbaum said. “I’ve certainly thought a lot about this…and my thinking has evolved over time…. Students don’t feel as though they can join the WSA—they don’t have the time, they don’t have the flexibility because of their work-study commitment—and I think this evens the playing field; it creates opportunities for students to participate in student government.”

Voting on the proposal ends Friday at midnight and is accessible via the WSA’s homepage.