On April 28, the University’s chapter of Shining Hope for Communities (SHOFCO-Wesleyan) held a film screening to screen a new documentary, “A Path Appears.” 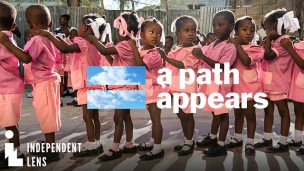 On Tuesday, April 28, the University’s chapter of Shining Hope for Communities (SHOFCO-Wesleyan) screened a new documentary, “A Path Appears.” The film, part of a three-part series aired on PBS, highlighted SHOFCO’s efforts in battling sexual assault in the slum of Kibera, Kenya.

The film followed Mia Farrow and her son Ronan Farrow in Kibera as they visited SHOFCO and were introduced to its two founders, Kennedy Odede ’12 and Jessica Posner ’09. In addition to establishing the Kibera School for Girls, SHOFCO also developed other resources to help the community.

The two University alumni, Odede and Posner, met in Kenya when Posner was studying abroad in Kenya. Posner encouraged Odede to apply to Wesleyan, and with no formal education, he received a full scholarship. His entrepreneurial drive led him to receive several awards, and he was also named one of Forbes Magazine’s 2014 “30 Under 30: Social Entrepreneurs.”

Alessandra Cervera ’16, the organizer of the event, said that SHOFCO’s goal was to empower women in Kenya.

“The way they saw this goal being realized was through creating a tuition-free, all-girls school in Kibera, and then having a bunch of community projects surrounding it, such as a clean water tower, a library, a technology center, and a group that talks about sexual health, so people in the community realize that women are important and they are valuable and their education is important,” Cervera said.

The segment of “A Path Appears” details several cases of sexual assault and talks about the struggles that the survivors faced. The film announced that 15 percent of the girls coming in to the preschool had been raped or sexually assaulted.

The film highlighted two cases of sexual assault in the Kibera community and explained how the SHOFCO team helped to gain justice for the young girls. One, 12 years old, was unable to walk after being raped repeatedly by her grandfather. Another girl, four years old, was raped by a 12-year-old boy.

According to the film, the issue is one that is overlooked in Kibera and needs to be brought more to the forefront. The police are generally unresponsive and sexual assault is still rampant in the community.

“A Path Appears” brought together many celebrities and public figures, such as Jennifer Garner and Bill Clinton, in order to spread awareness on issues plaguing women today.

Kevin Winnie ’16, who previously worked in Kibera, expressed his excitement at the fact that SHOFCO is beginning to gain international attention.

“It’s great to see what they’re doing…[and also] just looking at how they’re changing the culture of domestic violence and violence against women in Kibera,” Winnie said.

SHOFCO-Wesleyan continues to work to spread awareness on the issues in Kibera and fundraise for the school.

Tiffany Coons ’18 believes that SHOFCO’s efforts to have a holistic approach to problems in Kibera are very important.

“I think it’s really important that as a community we focus on organizations that actually target parts of the root causes of a lot of problems, whereas a lot of people just throw money or try to do a Band-Aid fix,” Coons said.

In the film, SHOFCO is able to help the victims of sexual assault by encouraging them to approach the police if they so choose. They also accompany the victims to hospitals and give them safe places to stay, as many of them have nowhere else to turn.

In the film, something that was particularly noticeable was the sense of community that many of the Kiberans had. During a community soccer game, many people came to watch, and SHOFCO used that opportunity to educate the community on pertinent issues.

Through the guidance of Odede and Posner, SHOFCO has been able to make a mark in the Kiberan community and aid those living in the slums.

The film was used to raise awareness on issues surrounding women and help SHOFCO gain prominence. The organization hopes to raise donations to continue its projects throughout Kibera and Kenya.