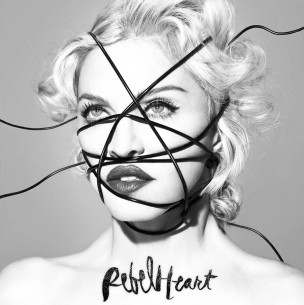 There are many reasons why one likes a certain type of music at a certain time. For me, it’s that a piece can either initiate a movement in my body or a thought in my mind. I have relied upon many artists for these initiations, but only a few have won me over as a fan and consistently met my expectations over their entire careers.

In 2008, I saw the music video for “4 Minutes” by Madonna featuring Justin Timberlake and Timbaland. Whether it was the music or the choreography that hooked me on to the music video, “4 Minutes” was my introduction to Madonna and her legacy. Although I did not know Madonna before that song, to my surprise my parents told me that they used to listen to her songs in their 20’s. Madonna was and still is the only musical link that remains between my parents and me.

Seven years later, Rebel Heart, Madonna’s 13th studio album, was released to favorable reviews and debuted as the best-selling album of the week. However, only a week later, the album sales dropped by 78 percent, and now, after less than two months, “Rebel Heart” is not even among the top 200 best-selling albums in Apple’s iTunes Music Store. What happened to the Material Girl and her once unstoppable fandom? Did I miss her glory era? Must I now succumb to the bubblegum pop-centric stylings of Taylor Swift and Katy Perry? Or is Madonna taking the wrong path? More importantly, am I losing one of the very few strings that is keeping me connected with my parents’ artistic taste?

Much like most of Madonna’s fans, my initial reaction to the substantial drop in Rebel Heart’s sales was denial. I used the widespread leaks of several demos, released long before the initially planned release date of the album, as an excuse. Even though almost every track of the final album has been available on pirating websites, and even on YouTube, since December of last year—which ultimately led to a rushed early release of the album—this mischief can’t justify Rebel Heart’s severe lack of presence on social media regardless of how many albums have been purchased.

Many fans, including me, along with some critics partially blame this on the final album being unpolished in comparison to the leaked demos. Many find the demos of some songs are surprisingly superior to the versions included on the final album. This might be the result of having 14 producers working on the album who couldn’t harmonically collaborate and produce a singular unit under the pressure of the leaks. The rushed process goes even further beyond assembling the final album and extends to choosing “Living For Love” as a lead single. The song is a generic, forgettable dance number that assured the doubting audience that Rebel Heart might as well be a redux of Madonna’s previous albums, specifically Confession on a Dance Floor from 2005.

Not long after the evident failure of the first single, “Ghosttown” was released as the second single, showcasing the vocal power firmly attached to Madonna’s love ballad legacy. What should have been promoting the album as the first single is now Rebel Heart’s life support and Madonna’s last chance at finding a desirable place among the new generation that feeds from the growing population of young musicians rather than giving a chance to those whose fame is heavily pinned down in time and rooted in previous generations.

As much as I think the way the album and its singles have been produced and chosen should be criticized, I believe that their promotion styles should be panned twice as much. If releasing the music video of “Living for Love” on Snapchat wasn’t enough for Madonna to show teens that she is not a technophobe, the music video of “Ghosttown” had a failing debut on Meerkat, a less-known live video streaming app, before it was released on common streaming services like YouTube.

As of now, Madonna’s publicity team is desperately clinging to gimmicks in hopes to hit its target of becoming relevant in a society that Madonna claimed to be ageist towards females in her recent interview with Rolling Stone. “It’s still the one area where you can totally discriminate against somebody and talk shit, because of their age,” Madonna said. “Only females, though. Not males. So in that respect, we still live in a very sexist society.” Overall, these inconsistent promotions or publicity stunts have alienated the younger audience into perceiving Madonna as a once-famous star who fell behind the crowd and couldn’t adapt to today’s exclusive entertainment industry.

It is not clear whether Madonna can make a comeback and continue her record-breaking career. I’m afraid that I have indeed missed the golden era of one of my favorite singers. Even though Madonna’s personality and controversial characteristics have never appealed to me, the power of her music is the one thing that I’ll truly miss if she fades away. I hope that my less hopeful look into the future and critical analysis of the current situation is fundamentally affected by the temporary shortcomings that should have been anticipated. However, in the worst-case scenario, Madonna has left behind a legacy, with Rebel Heart as an acceptable ending, that is almost impossible to erase from history. In 20 years, I’ll still remember that once there was Madonna and she was the only one of her kind.