This year’s Psi U pledges are holding a litter clean up scheduled for April 27 as their community service project for the spring semester. 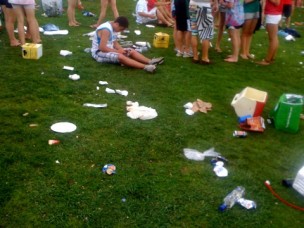 This year’s Psi Upsilon (Psi U) pledges are holding a litter cleanup scheduled for Monday, April 27 as their community service project for the spring semester. The cleanup will focus chiefly on the center of campus: Foss Hill, Andrus Field, around Usdan and College Row, and the backyards of houses around Fountain Avenue, with the possibility to extend further depending on participation.

In an effort to bolster its engagement with the greater University and Middletown communities, the fraternity changed its policy this year so that the incoming pledge class now chooses their own project to undertake. Linsin Smith ’16, a pledge for Psi U, discussed the thinking behind the cleanup.

“I was with a couple of other members of my pledge class, and we noticed how gross Foss is after everyone’s on it, like people forget to pick up their trash, there are no trashcans available, so it’s kind of a lose-lose situation,” Smith said. “We were just like, ‘Wow, what an easy thing, what a great thing we could do that would totally change Wesleyan just for a day and make it a clean space and really pick up and take care of this place.’”

Fellow Psi U pledge Joseph Nucci ’16 is the event’s main organizer and also the owner of the event’s Facebook page. Nucci discussed his motivation behind the event and his publicity efforts.

“Foss can get pretty messy, backyards can be just filled with litter, especially when it’s nice outside and people want to chill outside,” he said. “So we were thinking, ‘Wouldn’t it be great if we could just motivate the campus somehow to get more into picking up the trash around them when they see it?’ And we thought the easiest way to do that would be to launch an initiative.”

Matthew Siegelman ’16, president of Psi U, agreed with the sentiments expressed by the pledges. He recalled the sight of Public Safety officers picking up litter after Zonker Harris Day as an impetus for the cleanup.

“You know, I think that [Zonker Harris Day] was a really fun day for a lot of students, … [but] it’s kind of sad to see, at the end of the day, Public Safety officers walking around, putting litter away in trash bags and walking up the hill when that really shouldn’t be their job,” Siegelman said. “They have more important things to do, especially on Zonker Harris Day.”

Nucci further commented on seeking to inspire widespread student involvement, citing an incident that occurred when he and other Psi U pledges were picking up trash.

“For our [semester] community service project, a few of us were actually just picking up trash outside, and some people that came up to us—people that we knew, people that we didn’t—were like ‘Oh, thank you! This is great, but why are you doing this?’” he said. “And we thought that was kind of interesting. Even though it’s clearly a great thing to pick up litter, people were both surprised and…didn’t fully understand why you would engage with this.”

Smith commented on the possibility of future litter cleanup initiatives, stating that, while it remains a possibility, there were no current plans to make the cleanup an annual event.

“I think it would be really cool if it was always something that Psi U did,” Smith said. “I think that would be a cool annual or…bimonthly thing in the spring or in the fall, but I can’t speak for what future pledge classes will do. Maybe they’ll want to do some big community service event; it’s all kind of up to the pledge class at the time.”

The cleanup is open to all, and although the event is a Psi U function, members of various campus Greek organizations are also invited.

“You’ll see, all the pledges will be walking around with trash bags and gloves, and, if you want to be a part of it and get a bag, get a pair of gloves, you can go even if it’s just for five minutes,” Nucci said.

Siegelman reaffirmed the importance of community service to Psi U and called for other Greek organizations to engage in service projects more often.

“[Community service] is really core to Psi U, and that’s something that hasn’t changed this semester,” Siegelman said. “I would encourage every Greek organization to try and have more programs for themselves or in conjunction with other institutions, perhaps through the [Inter-Greek Council], to try and both benefit the school and also call attention to the importance of the continuation of Greek life on this campus.”

Smith summarized her expectations for the cleanup, noting that it would be good both for the campus and the participants.

“It should be cool, it should be fun, and hopefully it makes the campus look good,” Smith said.

Nucci also expressed his hope for the success of the initiative, and said he hoped to see widespread participation from the greater student body.

“This is one of those things, you know, that’s a really great idea in theory, but I’m interested and excited to see if Wesleyan rises to the challenge,” he said.