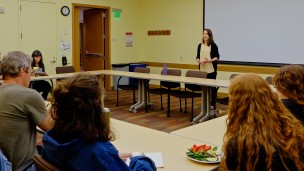 On Tuesday, April 23, Bon Appetit sponsored a film screening of “Food Chains,” a movie focused on farmworkers and how they have been exploited by the food industry. More specifically, it looks at a group of tomato farmworkers in Immokalee, Fla., the Coalition of Immokalee Workers (CIW) who worked to create a Fair Food Program that Bon Appetit signed onto in 2009.

In Immokalee, a group of migrant farmworkers worked to pick tomatoes and sell them to large U.S. companies such as Publix and Safeway. However, their wages are low and consistently land them below the poverty line. As a result, the CIW created the Fair Food Program and asked companies to sign it in order to ensure farmworkers’ rights. The New York Times has called the program the “best workplace-monitoring program in the US.”

In 2009, Bon Appetit was approached by the CIW to sign on to the Fair Food Program. They were the first food service company to sign the agreement. Today, companies such as Chipotle, Walmart, Burger King, McDonald’s and Taco Bell have signed the agreement as well.

“[Bon Appetit] is doing it because we care about how farmworkers are treated and we want to raise awareness about poor treatment of farmworkers around the country,” Tocco said.

The issue of farmworker exploitation is one that is often ignored, due to a disconnect between consumers and what they buy at supermarkets; the movie aims to change this mindset.

Emma Sherman ’17 thought that the film was very powerful and raised awareness on an issue that she admits to not knowing enough about before.

“People do not pay that much attention to the conditions that contribute to the food that we eat. It’s a lot of ‘out of sight, out of mind’ kind of thing, and I think it shouldn’t be,” Sherman said. “I think this should be a more publicized issue than it is.”

The screening came in conjunction with Farmworker Awareness Week, which was celebrated from March 24–31. It was screened during Earth Week as the campus engaged in environmental issues, and these events opened up new dialogues on related issues as well.

“We talk about food system and climate change, about animal welfare…issues and public health issues associated with the food system, but there are also people in this food system,” Tocco said. “Farmworkers are the backbone of our food system and are treated very poorly and paid unfairly for the hard work they do. We wanted to help call attention to this issue and change things.”

The movie attracted a large amount of media attention due to the various famous people involved in its creation. Eric Schlosser, author of “Fast Food Nation,” and actress Eva Longoria produced the movie. It was also backed by Abigail Disney of the Disney family. The CIW also had public backing of the Kennedy family, as many members of the Kennedy family appeared in the movie, including Ethel Kennedy.

Alex Fireman ’16 believed the movie was a great medium to showcase the issue.

“I think the movie did a great job of explaining a very complicated issue,” Fireman said. “I had heard about before but didn’t quite know the extent of it, and it was great to see it in film form, in an easily accessible manner.”

The movie was powerful and showcased many personal stories of the tomato pickers in the farms of Florida. In the film, they campaign the major supermarket Publix to contribute one more penny in buying a pound of tomatoes, which could double the wages for the tomato pickers.

Despite the conditions that the farmworkers had to go through, the movie shows the hope that they have for future generations.

“The issue can be a tough one to talk about, but I think the movie does a good job of showing it,” Tocco said.