Returning to Wesleyan for a discussion on music and race, followed by a concert, Heems showed up late and seemed to go downhill from there. 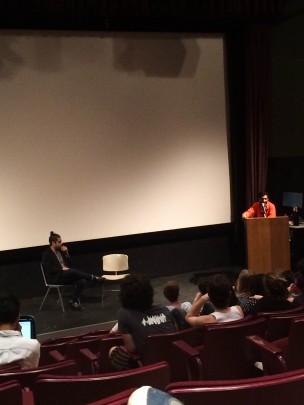 The stage at the CFA Hall was set on Saturday, April 18, for one of Wesleyan’s most recent high-profile alumni, the musician and former Das Racist rapper Himanshu Suri ’07 (“Heems”), to revisit his alma mater, about which he has voiced decidedly ambivalent opinions. However, as the 6:30 p.m. speaking time came and went, the question arose: Where was Heems? Finally, at approximately 7:45 p.m., Heems arrived at the CFA with former Das Racist hype man Ashok Kondabolu, better known as Dapwell, and apologized for the wait in a voice worn-down from the rigors of touring. While the conversation, a somewhat meandering and unstructured affair was concluded with relative ease, the uncertainty surrounding its beginning was an ominous sign of things to come for Heems’ performance later that night at Eclectic.

The talk, billed as a discussion on race, music, and activism, was hosted by the Wesleyan Asian American Student Collective. It consisted of an hour and a half Q&A session where members of the audience asked a diverse array of questions ranging from whether Heems had ever dealt with the Wesleyan judicial system (he responded with the Jay-Z lyric, “beat the charges like Rocky”) to what he thinks of appropriation in rap music, and how, as an Asian American rapper, he navigates its pitfalls.

Das Racist, once referred to as a “multimedia art project,” was always an experiment, testing the abilities of listeners to critique society, and the artists themselves, in a sincere fashion. The group’s satirical capabilities extended beyond rap (see its brilliant takedown on Flavorwire of Sasha Frere-Jones’ 2009 New Yorker piece proclaiming the death of hip-hop music). It also subtly pushed its audience to reevaluate whether hip-hop culture should really be in the hands of bloggers from sites such as Pitchfork—or what the other half of Das Racist, Victor Vazquez ’06 (Kool A.D.), once referred to as the “filth that is progressive liberal white America in trendy Williamsburg.”

The nearly three years since Das Racist broke up have provided Heems with the hindsight to reflect on the Das Racist experience, and how its message was interpreted, or misinterpreted, by the media.

“You try and control your narrative and reflect it in the music,” Heems said. “But, then you have a 50-year-old white dude with a pop or rock music background and you’re trying to explain to them what rap music is. Things get lost in translation.”

The result of this cultural disconnect are articles like New York Magazine’s 2010 profile of Das Racist, titled “Straight Outta Wesleyan.” As the discussion on the misrepresentation of race and privilege in hip-hop culture evolved, Heems discussed his feelings on the way Das Racist, by virtue of the group’s association with Wesleyan, had been portrayed as elitist college grads who had no place in the medium.

“The idea that us being college educated and not being able to rap because of that is inherently racist,” Heems said. “It’s weird because, yes, I went to Wesleyan, but I’m also a first-generation college student, and a Punjabi American who comes from little privilege. So it was ironic, the way we were portrayed.”

Since Das Racist broke up, Heems has undergone a complete character shift, or maybe he’s just becoming the artist he always wanted to be. Eat, Pray, Thug—his most recent solo release—is a serious record, one that seeks to frankly evaluate institutionalized racism and prejudice in the aftermath of 9/11, and it draws few parallels to Das Racist’s sarcastic and sometimes concealed messaging. It received relative critical acclaim, and, with lines like “product of partition/Dripped in Prada for the stitchin’/Proud of superstitions,” from the eviscerating album highlight “Patriot Act,” it’s easy to see why. However, a divide exists between those who characterize Heems as uncertain of his voice, like Pitchfork writer Jayson Greene (who said, “the most uncomfortable moments on Eat, Pray, Thug are like this, watching a guy try for ironic laughs and failing, and they feel like unwelcome holdovers from Heems’ previous life”), and those who proclaim him a hip-hop savior of sorts, like a Mic article from last month titled “Everyone Is Focused on Kendrick, But This Is the Most Exciting New Name in Hip-Hop.” Ismael Coleman ’15 challenged Heems on this Kendrick comparison, asking whether he felt the article was disrespectful of Kendrick’s contributions to hip-hop as well as generally ignorant in the comparison and its characterization of the state of hip-hop.

Heems, appreciative of but seemingly uncomfortable with the Kendrick Lamar comparison, partially dodged the question by positing that, because his album only cost $10,000 to make, the production value and rollout were dramatically different. For this reason, he said, comparison would be difficult. However, he did open up about existing as a rapper outside of the black-white dichotomy, and about still feeling guilty about appropriation in hip-hop music.

“That’s one reason why this may be my last album, because I don’t want to appropriate an art form. I don’t want to continue to contribute to that,” Heems said. “That’s why the album’s called Eat, Pray, Thug–because I was poking fun at another form of cultural appropriation, this whole idea of going to India and ‘figuring it out, man.’ After six albums, I feel like I’ve exhausted the medium.”

When Dapwell opened his DJ set at Eclectic around 10:30 p.m., anticipation for Heems’ homecoming performance was palpable. The show was a perfect platform for Heems to reconnect with his alma mater, and bring full circle his cultural critique to the very community he said taught him, “What real white people [were like], like New England-boarding-school, old-money wealth.”

Instead, another Wesleyan rapper, the fiery Rhys Langston (Rhys Podell ’16), completely stole the show. As Heems’ opener, Langston faced a sizeable crowd, but one that was focused on the night’s headliner. Langston soon realized he needed to fire up the audience, and his dynamic live performance included crowd surfing, strolling through the crowd while rapping, and bringing up the entire front row (including this writer) on stage to mosh.

“I was humbled that [the crowd] stayed engaged,” Langston said in an interview with The Argus. “When I first got on, there were a lot of people on the porch, doing ‘the Eclectic thing,’ and I expected them to just wait for Heems to get on, considering I wasn’t the reason they came. It was a nice surprise, and I’m happy I had the opportunity to perform. Since being at Wesleyan and coming into my own as a musician, I’ve been fortunate enough to be asked to perform in a variety of types of environments/styles. I’ve kind of stopped caring about ‘the rules’ of performing, especially in terms of the hip-hop genre.”

Unfortunately, Heems failed to bring to the stage any semblance of the passion or energy that Langston exhibited. He emerged belligerently inebriated, and his performance was notable for its unhinged nature. Stumbling around the stage, the rapper would often mumble through lyrics or stop rapping altogether and scream into the microphone. At one point, he rambled on about how Eclectic was the best thing to happen to Wesleyan, a statement that was met with crickets.

Even more troubling than his ineptitude as a performer was Heems’ decision to self-DJ off his iPod. While the tactic was unprofessional but not inherently problematic, Heems’ greatest error was his decision not to play instrumental versions of his tracks but rather the full studio version with his verses included. The performance devolved into Heems rapping over his own songs and often pausing to give the technician, Eric Poretsky ’18, advice, while his own lyrics would still be playing over the speakers. Soon, the listless crowd thinned out, and Heems concluded his performance in front of a half-full Eclectic audience. Heems, curiously self-aware, actually tweeted about his performance style yesterday, seeming to blame the crowd for its failure.

“Also, I noticed fans really hate when I DJ for myself off an iPod. They really like the visual of a DJ because that’s what they have seen before.”

Comments like these are indicative of Heem’s persona as a performer. Rather than admitting that playing the full versions of his songs while performing cheapened his act, he blamed fans for their inability to adapt to his amateurish performance style.

Heems now presents himself as an artist with unflinching seriousness who clearly cares about holding art to a high standard. Because of this, a disconnect has emerged between Heems the musician and Heems the performer. Given how far his music has evolved, it was strange to see him stuck awkwardly between his Das Racist persona and a genuine cultural critic deserving of greater artistic merit.