Forty students held a sit-in in President Michael Roth’s office on Thursday, April 16 to protest the University’s investment in fossil fuels, the Israeli occupation of Palestine, and the prison-industrial complex. After meeting with the students on Friday morning, Roth agreed to endorse prison divestment, and the Coalition ended its sit-in. 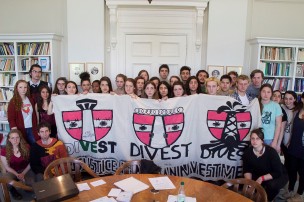 At 10:45 p.m., over 10 hours after entering the office of University President Michael Roth, the nine remaining members of the Coalition for Divestment and Transparency left for the night. So as to not place an extra burden on Public Safety, which has kept at least one officer attending the occupying party since their meeting with Roth ended at 1:15 p.m., the group reached a compromise to save their place in the office.

They returned the next morning at 8 a.m. sharp; by 10:30 a.m., Roth had finished meeting with the occupying students and agreed to publicly endorse divestment from the prison-industrial complex.

The Coalition’s sit-in would end.

Around 40 students had gathered in South College at noon on Thursday, April 16 for a sit-in to demand the University’s divestment from fossil fuels, the prison-industrial complex, and the Israeli occupation of Palestine. According to spokesperson Abby Cuniff ’17, the Coalition—a newly formed collaborative composed of members of Wes, Divest!, Students for Justice in Palestine (SJP), and Ujamaa—met with Roth for an hour to discuss their manifesto and read him their demands.

After Roth left to attend his day’s meetings—which he rescheduled away from his office, taking his administrative materials with him—the Coalition issued a press release.

“The students are calling for a commitment to divest direct holdings from the prison-industrial complex, the occupation of Palestine and the fossil fuel industry,” the press release reads. “They also call for greater transparency and accountability of Wesleyan’s $793 million endowment.”

The event marked the 37-year anniversary of a president’s office sit-in for divestment from South Africa that Roth participated in while a student at the University; the protest’s alignment with the second day of WesFest was just a coincidence, according to SJP member and Coalition spokesperson Alice Markham-Cantor ’18.

“We’re pulling from that history of activism on campus,” she said.

The sit-in also marks the 27-year anniversary of a 1988 sit-in of President Colin Campbell’s office, also for South African divestment. That protest, organized by a student group called Divest Now, lasted 15 days and resulted in 110 students being arrested by police.

“There are some of us who are at the same level of commitment as students were in 1988—although they were 17 years in their campaign, while we have been discussing fossil fuels for two years, and occupation divestment for one or two years,” Cuniff said, speaking over the phone from Roth’s office. “Hopefully Michael Roth is not President Campbell, and that will not be something that will be needed to persuade him.”

According to a New York Times report from May 3, 1988, Wesleyan at the time owned stock in 12 companies doing business in South Africa—holdings that valued $10.6 million, or 4 percent of the school’s endowment. According to Markham-Cantor, the vast majority of Wesleyan’s investment choices are not made available to the public, so the extent to which the school holds money in various industries is unclear.

“They give it to various investment firms that buy huge investment cocktails of different firms,” Markham-Cantor said. “Investors like Wesleyan tend to stipulate, ‘Oh I don’t want to put my money in X company,’ which Roth did with tobacco, so we divested from tobacco. We want him to the do the same thing where we don’t put that money in these types of firms, for these three other issues.”

The Coalition hoped to draw parallels between their divestment goals and the anti-apartheid protests and Roth’s activism especially.

“I hope it was eye-opening for him to see the other side, see what’s it like to have these students repeatedly calling for action from the University,” said Coalition member Sam Curry ’17.

Curry also spoke to the links that drew the student groups together to form the Coalition.

“It took a lot of discussion,” Curry said. “We talked a lot about the intersectionality between the different movements and how they all overlapped so much and how they’re all really related to systems of oppression that we don’t want Wesleyan to be profiting from. In that intersection is where we found our solidarity and our unity amongst the different groups.”

Cuniff, an American Studies major, said that while she started out most interested in the environmental movement, she has become equally invested in all three campaigns.

“None of us are satisfied with only our own demands, which I think is a really beautiful thing that’s come out of this event,” she said.

After the students entered Roth’s office, they created a Facebook event—“Solidarity Rally For Divestment Sit-In”—to invite more students to participate.

“Our university makes money off the destruction of the environment, illegal occupation, and mass incarceration,” reads the description of the Facebook event. “We are tired of paying for oppression.”

Markham-Cantor said that a large crowd gathered at 4:30 p.m. to support the activists, and Visiting Professor of African American Studies David Michael Swiderski brought the students in his Introduction to Modern African American History class to the lawn beneath South College.

Members of the Coalition expressed their frustration with their lack of progress through other means and hoped to use their occupation to speed up the process.

“Our goal was to have a dialogue between groups and the University about our endowment and about where our money is being invested, to get a direct conversation with President Roth and bypass the bureaucratic channels that we’ve been not been able to successfully get conversation out of,” Curry said.

According to Cuniff, Roth promised another opportunity to further educate him on the issues—something the various groups have been doing for years, and not a satisfactory enough guarantee to compel the withdrawal of the sit-in.

The group’s recess for the night was a compromise reached after P-Safe alerted the Coalition that their remaining in the office would necessitate that officers work extra-long shifts to keep track of the students. After a discussion, the Coalition agreed that such an encumbrance was not in line with the rest of their protests, and looked to reach an agreement that would release P-Safe from its duties for the night while assuring the sit-in’s continuation.

“The student coalition and I had a constructive dialogue about the ethics of investing in companies involved with fossil fuels, the Israeli occupation, and, especially, prisons,” Roth said in a statement to The Argus. “Although we had our differences concerning the first two areas, I agreed in principle that the university should not be making profit from prisons. We will be looking into the issue further, reviewing Wesleyan’s current investment holdings, and thinking about how to invest our endowment in the future. I expect to continue the conversation with our engaged students.”

According to Cuniff, if the Coalition did not address these interrelated systems with equal gusto, any concession they might achieve could not be called a success.

“Injustice is injustice, and it’s not an investment no matter how you slice it,” Cuniff said.

This article has been updated from its original version.