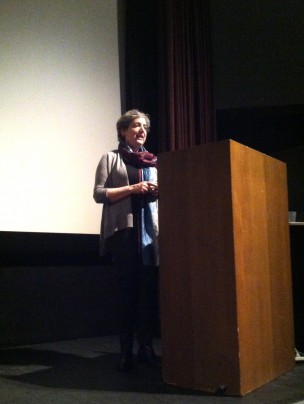 From WESU to WNYC, Julie Burstein ’80 has been in constant conversation. Through a career in journalism and media, Burstein has become adept at sparking dialogue that both flows naturally and explores the deeper intricacies of connection.

“You have to be careful when you talk to me because I’m always looking for a good story,” Burstein said.

While Burstein began her career before the Internet-catalyzed media revolution of the 21st century, she has become a renaissance woman for the digital age. As a public radio producer and host (she created WNYC’s “Studio 360”), author, creative consultant, TED Talk speaker, and public lecturer, Burstein is in the business of creativity, and more precisely the spark that creates new ideas and intriguing conversations.

On Wednesday, April 8, Burstein made the pilgrimage to CFA Hall, partially to speak about her career in journalism, but also to harness her experience as a TED Talk speaker to lecture on the origins of creativity, or as she refers to it, “duende.” Burstein believes “duende,” or the ability to lose oneself in an activity by reaching a heightened state of emotional or artistic expression, is critical to the creative process. Her talk (cosponsored by The Argus and WESU) verged on spiritual at times, seeking to evaluate the etymology of “duende,” and suggest how to apply its somewhat vague notions of enlightenment in the context of one’s professional life. She tied the source of her own quest for “duende” to her time at Wesleyan as a DJ for WESU.

“At Wesleyan and WESU I learned how to be creative,” Burstein said. “It was here that I learned the tools to think critically and develop my own sense of creativity.”

Tracing her own beginnings in the radio industry, Burstein cited a moment at Wesleyan that ended up having considerable implications for her future.

“I was in the Career Center and suddenly there was a job for production assistant in New York City,” Burstein said. “I called the guy and he said, ‘I’m sorry I just finished interviewing all the potential candidates.’ With typical Wesleyan chutzpah, I replied, ‘That’s too bad, because I am going to be in New York tomorrow and would love to talk with you.’”

With only her dreams, a train ticket, and the fears of post-graduation unemployment on her mind, Burstein went to New York for the sole purpose of meeting about a job whose window of availability had already been closed. As fate would have it, after charming the producer, she received a call the next day that the job was hers.

Her upstart career in production soon brought new challenges. Once, after confidently telling her producers she knew how to edit tape, she was forced to learn on the fly. Moments like these were only heightened by the need to navigate the myriad personalities that clash in creative partnerships.

“Conflict and difference is inherent in creative collaborations,” Burstein said. “When we work together on something, making room for difference is essential.”

Among her other projects, Burstein is currently producing a podcast for the Public Radio Exchange (PRX) called “Totally Cerebral,” featuring the neuroscientist Wendy Suzuki. She also hosts a series at the Metropolitan Museum of Art called “Spark Talks.” Whether she is coordinating lectures, interviewing people, or coaching those who want to give talks themselves, Burstein always seeks to empower people to speak.

“I love finding powerful voices, especially women’s voices, and figuring out what’s the right way to let them tell their story,” Burstein said in an interview with The Argus.

Burstein said that being a DJ at WESU necessitated creative thinking, because so many decisions are left to the person behind the microphone.

“It gave you enough of a structure to know what you needed to do, but then everything else was completely up to you. And so it was excellent training for creative work, because, frankly that’s what everything is…. Sometimes you don’t have any structure. You have to impose the structure yourself.”

During her talk, Burstein pivoted into an in-depth discussion of “duende” by tying together a series of seemingly unrelated vignettes about people she has met through her quest to uncover compelling stories. There was the corporate lawyer, who viewed law through the unorthodox lens of the anthropology major he received in college, and saw the “music” in the word of the law. Another story was that of photographer Joel Meyerowitz, whose diverse projects include an exposition on summer and a series of pictures capturing the remains of the Twin Towers in the aftermath of 9/11.

Soon, members of the audience became engaged in sharing their own professional creative experiences and were encouraged to speak about how a state of “duende” can be reached in any profession. From the pediatric doctor who found the beauty in sharing her medical knowledge to an educator striving to learn more, the audience provided the necessary scope to prove Burstein’s point: that ingenuity can be found in the most diverse and familiar of professions.

“There’s some deep threads to these stories all connected to uncertainty,” Burstein said during the talk. “We need to embrace this uncertainty as a central aspect of creativity.”

At a small workshop Burstein led prior to the talk, participants grappled directly with uncertainty. After getting to know each other through one-on-one interviews—a very journalistic warm-up—people in the workshop got into smaller groups to examine quotations about uncertainty. The workshop ended with the ultimate exercise in not knowing: Burstein distributed sealed boxes to groups of students and challenged them to guess what the boxes contained.

For Wesleyan seniors soon to devote their attention to post-graduate life, Burstein is a reassuring reminder that there is still a market for creative thought and expression, as long as one is open to channeling one’s ability through unique avenues. Sometimes, you don’t immediately know what’s inside the box, and that’s okay.

Correction: The original version of this article misspelled the name of photographer Joel Meyerowitz and stated that he worked for Studio 360. The article has been updated to reflect this correction. Studio 360 did produce a story about Meyerowitz’s work, which can be found here.