Participants gathered on Sunday, April 5 in the Daniel Family Commons for the "Amplifying Asian America" convocation. 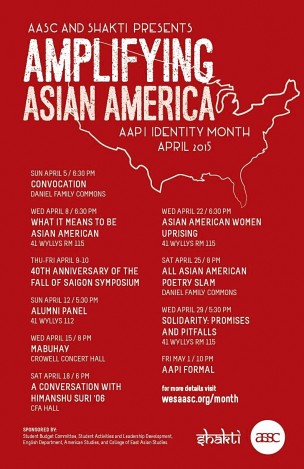 The University’s first-ever Asian American Heritage Month kicked off in the Daniel Family Commons on Sunday, April 5. Over the course of the month, the Asian American Student Collective (AASC) and Shakti will continue hosting weekly Wednesday dinner discussions. The month will end with a slam poetry event, and a formal will also take place in May.

Each event will feature a topic that relates to the month’s overarching theme: “Amplifying Asian America.”

Lynna Zhong ’15, a founding member of the AASC and one of the event’s principal organizers, spoke to the significance of having an Asian American Heritage Month at the University.

“This is the first time [AASC] tried to take over and do a month of events, because historically we haven’t gotten that much participation and mobilization in the community,” Zhong said.

The Convocation, catered by Haveli, featured two student speakers—Emily Murphy ’18 and Zhong—and a keynote from Jenn Fang, a blogger at reappropriate.co. Fang is a graduate student whose blog discusses various aspects of the Asian American Pacific Islander (AAPI) identity.

“Since 2001, Reappropriate has been the web’s foremost Asian American activism, identity, feminism, and pop culture blog!” Fang writes in her blog’s “About” section.

Murphy, the first speaker, told the audience about her experience as an adopted child. Born in China, Murphy was raised in California, and she discussed her discontent with the stereotype of Asians as the “model minority” as well of the concept of Asians as perpetual foreigners. As an adopted child, she recalled never being “white enough” or “Asian enough,” and emphasized her pride in her Asian American heritage.

“I’m really happy that I did talk because [it’s] not something I would normally do, and the fact that [the University] creates spaces like this to acknowledge and uplift Asian American experiences as an individual one or collective really speaks to the amazing support [the University] and AASC gives to its students of color,” Murphy wrote in an email to The Argus.

Zhong talked about developing self-awareness while growing up on the Lower East Side of Manhattan. She remembers being rejected by other Asian American girls similarly for being “too white,” and gravitating toward different social groups in order to distance herself from the Asian American stereotype.

Coming from a low-income family background, Zhong felt that she related more to her Black and Latino classmates, and began to identify more with those cultures. Looking back, she reflected on her appropriation of cultures that were not her own and how she came to understand the historical narratives of others while crafting her own. In the conclusion of her speech, she advised first-year students to think critically about the world and themselves, embrace discomfort, and be open to growth and change.

Fang then delivered the keynote address, which began with her personal journey. She discussed starting college as a Chinese-Canadian woman at Cornell University, but not really knowing what that meant. In high school, she had only learned briefly about Asian Americans in history classes, which lead her to question whether or not they had an important role in American history.

“The event went really well,” Zhong said. “About 40 people showed up, including Asian Americans, students of color, and other allies, so it was great to see the diversity of faces that came to support. I’ve been a part of AASC for four years, since it kind of just started, so it was really great to see the growth.”

Murphy credits its organizers for a job well done.

The next event will be held on Sunday, April 12, at 5:30 p.m. and will feature an alumni panel. Dinner will be provided.

Correction: An earlier version of this article stated that Fang attended University of California, Berkeley. Fang went to Cornell University. It also misstated dates of the Heritage Month events. These have been corrected.