Performing a set of both new and old material at the Heirloom Arts Theatre in Danbury, Conn., Jukebox the Ghost pleased long-time fans and new listeners alike. 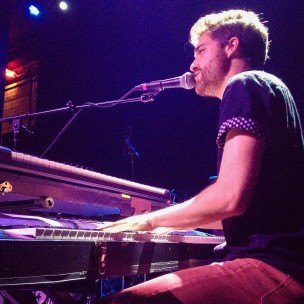 The Heirloom Arts Theatre in Danbury, Conn., with its discreet, warehouse-like location, is the last place you would expect one of the most buzzed about pop-rock groups in the country to perform. Yet, on Friday, Feb. 27, Jukebox the Ghost— Interscope and Cherrytree Record’s newest signee—transformed the drab but cozy confines of Heirloom into a frenzied dance party.

Despite performing “Postcard” on “Conan” a month ago, Jukebox’s Ben Thornewill (vocals and piano) and Tommy Siegel (vocals and guitar) have clearly not lost the personable nature that has attracted to Jukebox a cult-like following. Milling around the crowd during excellent openers Special Someones and Little Daylight, the duo connected with die-hard fans such as Christian Black ’18, who was attending his sixth Jukebox The Ghost concert and is illustrative of the many fans who have supported the band’s music and concerts since its debut album, Let Live and Let Ghosts, in 2008.

“It was definitely the best Jukebox concert I’ve ever seen,” Black said. “They combined the bangers and sign-alongs of their most recent album with the catchy, more complex tunes from the first three. Ben’s vocals were better than ever. I’m extremely excited to see them again.”

While it is important to note that Heirloom’s modest edifice created a warm and unimposing atmosphere for Jukebox to connect more intimately, it’s also worth acknowledging the balancing act Jukebox orchestrated in pushing its new material while still satiating the desire of a crowd comprised of mostly core fans. Caught in a peculiar window between having to still set up their own equipment before their shows and the fame that comes along with playing on “Conan” and signing with a major label, the band’s decision to open with the understated but instantly appealing “Postcard” was a nod to the crossroads that this Metro-area band faces.

Despite their major label grind, Jukebox appeared completely free and cultivated an incredible energy as they rattled off a string of hits from their most recent album, eponymously titled Jukebox The Ghost. Backed by Siegel’s commanding guitar riffs, they knocked out spirited renditions of “Made For Ending,” “Girl,” and album single “Sound of A Broken Heart” with near surgical precision.

“They brought a ton of energy onstage,” said Melissa Jankow ’18. “I was surprised about the fact that some of the songs on their newest record that I don’t love as much actually ended up being some of my favorite songs when they were performed live.”

“Jukebox has never been one to have the least awkward stage presence, but they definitely own it,” Black added. “They take their awkwardness and they make it the comedic cornerstone of the breaks in-between songs.”

Between cracking one-off jokes with Siegel, Thornewill displayed his considerable vocal range and towering ability as a pianist, which was especially evident on one of Jukebox’s most elegant numbers, “Undeniable You.”

“During ‘Undeniable You,’ Ben has been begun to loops his vocals and sing in a way that could only be described as whistle-toned,” Black said. “His vocal control and rein over the audience created a spell-binding performance.”

One highlight of Jukebox’s performance was when they decided to give drummer Jesse Kristin some recognition as he stepped up the microphone to perform his raw opening lyrics on “Hollywood.” When the twinkling piano keys of Kristin’s introduction developed into the buoyant guitar licks that make “Hollywood” a crowd favorite, the dance party that was interrupted when Siegel’s guitar cable snapped quickly resumed. When Siegel scrambled to fix the technical difficulty, Thornewill was forced to stall for 10 minutes (highlights of his attempt to distract the crowd include a cover of “Don’t Stop Believing”).

As Jukebox’s nearly two hour set began to wind down, the group ran through several of their older records such as “Hold It In,” “Victoria” and “The Stars,” separating neophyte fans such as myself from Jukebox stalwarts like Christian.

“Jukebox doesn’t take themselves too seriously, which lets the audience relax and have a good time with them,” said Gwen Rosen ’15. “Hearing ‘My Heart’s the Same’ and ‘Lighting Myself on Fire’ was incredible. They’re meant to be played back to back, but hearing it live made the transition so seamless.”

During “Empire,” Thornewill leapt up from the piano stool he had occupied the whole night, guiding the crowd through a sing-along.

“I’ve got my dreams and I’ve got my sleep/And I’ve a promise to build/It’s gonna keep these visions of an empire at peace,” the crowd chimed in.

When the song concluded, Siegel smiled and said, “I don’t think we even really need to sing these songs anymore. You guys have it covered.”

As the band completed their encore with a performance off the record’s first single, “The Great Unknown,” it perfectly captured where the band stands at this very moment: An indie-rock success story whose careful reconfiguration of their sound has scored them a record deal. As Interscope signees, will Jukebox be able to maintain a fan base with the unbridled enthusiasm on display at The Heirloom? “The Great Unknown” appears to address their vision of the future head on: “So let go/Of the world you know/There’s something’ waitin’ for ya/In the great unknown.”