As her senior thesis, Grace Herman-Holland ’15 recreates and transforms a theater tradition. 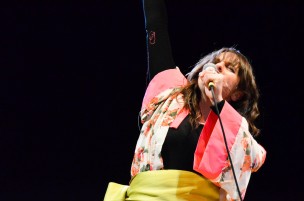 Last Saturday, with little to no previous information, I walked into “Starfall,” the senior thesis of Grace Herman-Holland ’15. I can safely say that this was one of the experiences that makes me happy to have access to this campus and the theatre it fosters.

“Starfall” tells a story equal parts simple and strange. At a cover-band concert, a bystander (Noah St. John ’18) and the band’s singer (Alyssa Rose Domino ’17) make a split-second connection, which is expanded upon and explored in a dream sequence featuring a villainous figure hell-bent on keeping the two apart (Marco Martinez ’15). All of this action takes place during the band’s set list: a selection of songs that one might have found at a bar mitzvah party or a middle school dance in 2009.

The stage—a rectangular platform attached to a long, narrow catwalk—surrounded the ’92, transforming the space into an excellent concert venue. The setup was not only effective from an expressive standpoint, as it provided the performers with a very specific space to move through and explore; it also opened the theater to a large, responsive audience, eager to hear music loved, hated, and hate-loved.

All of these elements were certainly key to the experience of “Starfall,” but they are not its main conceit. The majority of the show—that which takes place in its dreamlike, heightened world—was grounded in the tradition of Japanese Kabuki drama. The story was told just as much through dance and heightened motion as it was with dialogue, channeled through an elevated cultural and technical lens.

“Some people feel comfortable sitting still, in the dark, intently following a carefully constructed plot, but that particular kind of theater experience does’t really appeal to me,” Herman-Holland wrote in an email to The Argus.

Herman-Holland wanted her thesis to reflect a less strict boundary between audience and performance.

“Spectators of Kabuki in its heyday experienced theater in a way that was much more exciting to me,” she wrote. “Audiences were rowdy and unrestrained. They talked, ate, drank, and moved around during performances. They sat on cushions in the light, and came and went when they pleased.”

At “Starfall,” that atmosphere was very present. Audience members cheered, jeered, and interjected in the midst of the action. They interacted with the cast when they were offstage, shouted support, and moved throughout the room with little restraint.

“I began working on ‘Starfall’ because I was curious as to whether or not it was possible to re-create the atmosphere of kabuki when it was popular, in the context in which I love: a community of young people, in Connecticut, in 2015,” Herman-Holland wrote.

Her efforts proved it was more than possible. “Starfall” is most effective when it relies on the physical prowess of its cast. Martinez’s official entrance to the stage, set to Kanye West’s brag-rap masterpiece “Monster,” was a display of raw, muscular control. His nimble, forceful motion captivated on both a technical and emotional level. St. John, the show’s hero, did not have a false beat in his performance. He consistently moved with delicacy, precision, and skill, to spellbinding effect. And Domino, doing double-duty as the primary vocalist and actress, played her part with grit and grace. Her rendition of Radiohead’s “Creep”—a song that I, being a pretentious Radiohead fan, convinced myself that I hated—was as emotionally cathartic as anything I’ve seen in the ’92.

The three performers flavored the Kabuki idioms they operated in with elements of hip-hop, breakdancing, and capoeira, among other styles and traditions of movement, ultimately resulting in what may be the creation of a new medium for a very old type of theater. Here, the actors worked more as collaborators with Herman-Holland.

“Much of the actual movement came from the actors themselves, and it was the structuring and modifying that came from me,” Herman-Holland wrote. “For example, Marco created his entrances himself, and I restructured and contributed my ideas. But in the end, the movement score was the actors’, created by them, for their bodies.”

Martinez, for example, brought his previous experience with breakdancing into the mix, and felt that process contributed to the otherworldy feel of the show.

“Our transition into the fantasy world and the events that unfold in that world works somewhat like sampling in hip-hop,” Martinez wrote in an email to The Argus.

It is remarkable how well Starfall’s neo-Kabuki techniques fit in with its sonic background of all-too-familiar songs. A dance-brawl between St. John and Martinez would have been remarkable in silence, but the militant thump of The White Stripe’s “Seven Nation Army” teased out even more menace and beauty. A moment of tragedy-tinged-triumph late in the performance was rendered gargantuan by the conviction of My Chemical Romance’s “Welcome to the Black Parade.”

The most remarkable mesh of sight and sound, for me, has to be the band’s rendition of the Goo Goo Dolls’ awful “Iris” during the performance’s emotional crux. Despite everything, not only was “Iris” made tolerable, it was downright overwhelming. Without the involvement of Wesleyan student band Love Hotel, it’s very possible that “Starfall” would be rendered completely inaccessible. It certainly helps that Love Hotel covered each and every song with aplomb. And its bass player Anthony Dean ’17, with his permanent smile and full-body groove, is a veritable factory of joy.

Many people left “Starfall” voicing opinions criticizing the show for its appropriation of Japanese culture and tradition. While it’s true that the performers were not born within this culture, and that the production utilized items like kimonos and fans, these seemed to me more the accessories of a technical form than an act of cultural mimicry.

“It was important to me, and to everyone working on ‘Starfall,’ that we weren’t perceived as Americans pretending to be kabuki performers, or, worse, Westerners who are fascinated with the East because it is different and exciting,” Herman-Holland wrote. “We wanted to explore a style that we admire—while acknowledging we know little about it—with the purpose of learning about it and applying it to the only context we know well, which is our own.”

Martinez, for his part, has extensive experience with breakdancing, and used his connection to that to bridge the gap between the seemingly disparate form and his own experience.

“Having b-boyed… for nearly four years, I know the importance of situating yourself in a culture when you are not immediately there to experience its formation and diffusion,” Martinez wrote. “I contextualize my relationship with b-boy and b-girl culture by knowing the history, participating in the spread of the language and humbling myself in the face of a very rich social movement that has globalized into a movement phenomenon.”

“What I hope was that when we presented the new style of dance we’d created, being performed to the songs of today’s young people, we were presenting a blend of styles that was both our own and not our own, and respectful to the form we’d originally set out to explore,” she wrote.

“Starfall” may have been a display of a new medium of theater, one worth exploring and discussing far outside the venue. It may have been a really great concert that used skill and musical familiarity to bridge itself into something new and impressive. Above all else, though, it was one of the most technically impressive things I’ve seen at Wesleyan. 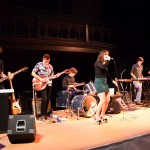 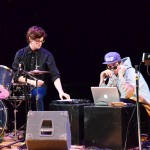 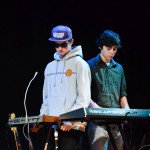 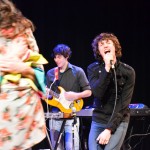 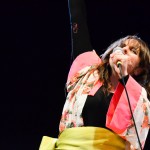