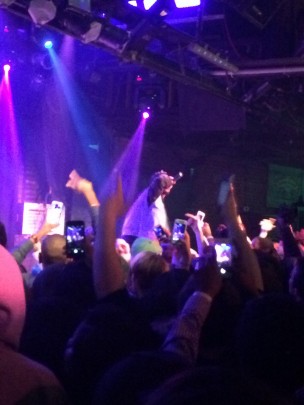 When Kanye West took the stage to perform his single, “Only One,” at SNL’s 40th anniversary special, the rapper appeared triumphant amongst a group of his creative peers. The rapper transitioned into a performance of a still-unreleased song, “Wolves,” and a lesser-known but similarly soulful Chicago-born rapper, Vic Mensa, emerged on stage. Hours earlier, Mensa had tweeted a snippet of the lyrics: “Don’t fool yourself. Your eyes don’t lie.”

In a moment when Mensa is poised to potentially break out like his childhood friend Chance the Rapper, becoming rap’s new critical darling, his surprise appearance all but confirmed his rising career trajectory. Mensa’s SNL debut was clearly on the rapper’s mind on Friday, Feb. 20, when he finally leapt on stage at 11:30 p.m. to greet a nearly hysterical crowd at Toad’s Place in New Haven.

“This has been a really crazy week for me,” Mensa said. “I got to perform with one of my heroes, and rock one of the world’s biggest stages. There’s only big things to come.”

The headliner for an event sponsored by Yale’s Black Solidarity Conference, Mensa tailored his set to feature several of his more introspective pieces, to somewhat mixed results. As Mensa strode on stage to chants of “Save Money” (the motto of Mensa’s rap collective), the jazzy drumbeats of “Lovely Day,” the opener of his mixtape INNANETAPE, reverberated around the intimate confines of Toad’s Place.

“Wake up, wake up, good morning / Go to sleep like Clay did Foreman,” he began. Sporting a jet-black leather jacket and backward baseball cap, the rapper sauntered around stage with the swagger of a prizefighter in a position to deliver a knockout blow.

Perhaps Mensa’s confidence that he already won over a crowd that was, in reality, quickly tiring caused his set to veer into more experimental territory. After a visceral performance of “Holy Holy,” a melodic track he dedicated to one of his friends who recently passed away, Mensa alerted the crowd that he would test out some new material he’s working on for an untitled first album, due out later this year.

After building momentum with “Lovely Day” and a victorious rendition of his song-stealing verse on Chance the Rapper’s “Cocoa Butter Kisses,” Mensa’s new material failed to capture the same energy. Unlike some of INNANETAPE’s subtle tracks such as “Holy Holy,” which often take several listens to truly connect, the crowd’s unfamiliarity with his new and similarly low-key music caused an awkward pause. At one point, Mensa’s manager Cody Kazarian played the role of hype man and executed a perfect stage dive to rile the audience. He remained in the crowd to mosh and chat with fans for the rest of Mensa’s set.

Sensing a lull, Mensa began to pace the stage and questioned the crowd: “Hey, are y’all still with me? Do we have Yale in here? Which other colleges are in the building?”

Unfortunately, Mensa’s set, a relatively brief 30-minute performance, had almost concluded and he had little time to lead the crowd through several of his lyrically dexterous and up-tempo songs, like “YSNP” or his remix of Disclosure’s “When a Fire Starts to Burn.”

Perhaps the most disappointing element of Mensa’s set was his puzzling failure to perform any of the recent one-off singles he recently released. These tracks, which represent Mensa’s latest foray into house-influenced hip-hop, received rave reviews from critics who have applauded the novel and surprisingly inventive direction his music has taken. Mensa’s new style would have blended fantastically with a raucous crowd that almost brought down the roof during DJ Relly Rell’s set earlier that night.

Nevertheless, Mensa finished his set on a high note, performing the crown jewel of his catalog and the first single off his debut album, “Down On My Luck.” The house-inspired single, which has the hazy and energetic feel of a grimy club at 2 a.m., seemed to breathe life into a somewhat deflated crowd. When Mensa’s winding verses concluded into the song’s focal point, a chant of the lyric, “Fuck that, get down,” the anticipation over Mensa’s performance appeared justified.

Toad Place’s barely elevated and rickety wooden platform, which is about as stable as the terrifyingly tenuous Six Flag’s ride El Toro, began to tremble as Mensa’s crew exited the VIP section and sparked an impromptu dance party on stage. Before Mensa concluded his set, he seized the crowd’s energy and gave a speech that paralleled the preacher-like performance of socially conscious rappers like Common.