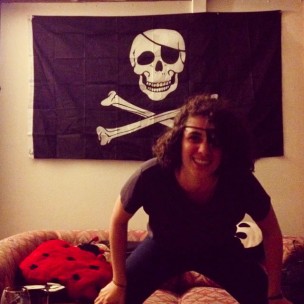 You might know Talia Baurer ’15 from having read her elaborate Facebook event descriptions, or maybe you were lucky enough to receive her biweekly sex toy Snapchats this summer from her internship at The Center for Sexual Pleasure & Health. A self-described open book, she is widely considered a go-to person for conversations about sex and reproductive justice—that is, when she’s not busy organizing events for her residents or cooking meals for Shabbat at The Bayit. The Argus snagged an hour of Baurer’s time to talk creepy strangers on Tinder, ibérico ham, and her post-grad plans (spoiler alert: they involve witchcraft and wizardry).

The Argus: What do you think makes you a WesCeleb?
Talia Baurer: I feel like there are two, maybe three things. One of them is that I do a lot in the Jewish community at Wesleyan, so I think anyone in the years below us who’s gone to their orientation Shabbat has met me. I’m very loud, and I lead a lot of events in that way, which attract different people. The second thing is that I talk very loudly and unashamedly about sex, all the time. I think that while Wesleyan is a very sex-positive campus in a lot of ways, a lot of people have felt comfortable or uncomfortable with me in a way that sticks out. Also, I’ve never really had just one friend group at Wesleyan, so I think that’s the third thing. And I’m a [Community Advisor]; I’ve been in ResLife since last year, which has actually introduced me to a lot of really wonderful people that I don’t think I’ve interacted with in many other ways at Wesleyan.

A: How does it feel to be one of the “point people” for sex discussion on campus?
TB: It’s kind of intimidating. I think sometimes I feel a little self-conscious about it, just in that I’m not some authority in any way. I’m flattered that a lot of people agree with me or have respect for me in that area, especially since it’s one in which respect is not so easily gained. It’s pretty fun, because that’s my favorite thing to talk about, and I’m very happy when people have questions and actually want to converse and learn to do something, communicate something, or deal with something, from very silly and fun to very serious.

A: Have you had negative experiences where people question this interest of yours?
TB: Oh yeah, a lot. People don’t really take it seriously. At Wesleyan I think a lot of people do, or at least feel that the status quo is to accept it, but definitely outside of Wesleyan, people are kind of confused. My family is super into it; my parents support it and love it, which is nice. But this summer I had an internship at the Center for Sexual Pleasure & Health, which is Oh Megan’s nonprofit, and just talking to strangers in bars, people were kind of confused, like, “Why [do] you need to talk about sexual pleasure at all?”

A: Did people ever think you were using your job as a pick-up line?
TB: I don’t know, but people have definitely used it as a pick-up line on me, and that is gross. It was kind of a joke that I would play on Tinder to a certain extent this summer: I would sometimes tell people that I was working at a place called the Center for Sexual Pleasure & Health. A ton of people were actually really respectful, and were like, “Oh, that’s interesting! How is that?” But some were kind of more along the lines of “Oh, so you’re looking to experiment?” or, “Oh, what can you teach me?” And they were definitely all strangers.

A: Do you ever feel uncomfortable that you might be defined by this one thing?
TB: Yeah, for sure. I think that for every person who’s laughing with me and talking about sex with me, there are people who are kind of laughing and smiling with me because they think it’s such a ridiculous thing, and think, “This is great for an extracurricular activity while you’re at school, but it’s not really a life choice.” Or there are people who are involved in related activism who think this is a silly branch off of talking about very real problems, where for me, it’s related. Talking about sexual pleasure, talking about enthusiastic consent and communication, talking about reproductive justice and people’s right to do whatever they want with their bodies as long as they’re not harming anyone—these are all super connected for me.

A: Let’s shift paths. So, tell me about your thesis—but try not to cry!
TB: Oh, God. I hope none of my advisors read this. I did start this semester’s first real work on my thesis yesterday, so I feel a little bit more comfortable on it. I’m writing about historical memory of the Franco era in Spain through the lens of this one site outside of Madrid called the Valley of the Fallen. I’m writing short stories, so it’s a creative thesis. COL lets us do pretty much whatever we want for theses since it’s interdisciplinary. They always refer to this person who created a catapult as their thesis, and it’s in the COL library.

I did a lot of research for the first semester. I was actually able to go to Madrid over winter break, which was amazing, because I was able to go back to the site itself and revisit my experience with it as an outsider. Now I’m just in the writing, which I started last semester—so it’s not tragic that last night was my first [step] this semester! I’m writing from different perspectives of people and types of people, and the ways they interacted with this site.

A: What exactly is the site?
TB: The site is basically this very controversial monument that was built by Franco, in name to commemorate all the dead of the Spanish Civil War. It’s this huge basilica built into a mountain outside of Madrid, and it was built in part by political prisoners. It was meant to bury the dead of both sides of the civil war, and they say it’s in the name of reconciliation, but really there’s a lot of erasure of the side of the war that lost, because they’re all buried under the words, “Die for Spain and for God.” A lot of bodies were uprooted from mass graves to be buried there. A lot of people want their family members out. There’s just layers on layers of why people hate this site.

A: On the subject of your abroad experience, tell me about your relationship with ibérico ham.
TB: Oh, no! All my vegetarian allies will hate me! So, when I was abroad in Madrid was when I started being a vegetarian, and I never tried the famous Spanish ham, jamón ibérico. Then over this winter break I went back to Spain, and I was like, “I’m doing it.” So I went to this really nice café and I tried it. I really didn’t expect to like it that much, because usually when I eat meat it’s pretty gross to me now, but it was so delicious that I brought some back for my house.

A: Smuggled some back for your house.
TB: Well, it’s cured, so it’s not really illegal to bring it back to the country, in small quantities at least. So I brought it back for my house but it didn’t go as fast as I expected [it] to, so I’ve kind of been eating it here. Don’t tell my mom.

A: Speaking of your house, how did your house’s nickname come about?
TB: Last year, when we finally decided to live together—me, Katie Solomon [’15], Kate Gilpin [’15], and Hannah Rimm [’15]—we all went out together one night, and we were at a party at Open House. I was about to leave but we were having so much fun together that I wanted to come back to meet up with them again, but I didn’t have Kate or Katie’s numbers and Hannah was nowhere to be found. I went to put Katie’s name into my phone, and autocorrect changed it to “Matey.” We thought this was so raucously funny that I saved her in my phone as Matey Solomon, like a pirate, and I put in Kate as Mate Gilpin. From that, we decided that we were all going to be pirates, and our house was going to be called the Pirate Ship.

A: Is there one thing or habit most people wouldn’t guess about you at Wesleyan?
TB: Oh, that’s hard, because I’m really an open book. Maybe that I’m dating an AEPi brother. Oh, I thought of another! Well, it’s not really a habit. But my graduation present to myself is going to be that I’m going to reread all of the Harry Potter books in a row. I used to read them so frequently that there was nothing new in them, and when I would turn the page I would know what the next word was going to be. So I told myself, “I’m stopping, I won’t read them again until when I am graduating college.” Now I’m graduating college, and this summer I’m going to leave Wesleyan, go home to Philadelphia, curl up in my bed, and read every single Harry Potter book.

Interview has been edited for length.