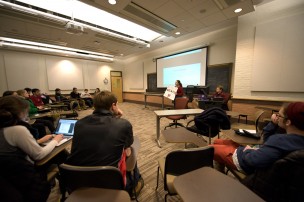 Approximately 15 students gathered in Allbritton 103 on the evening of Sunday, Feb. 8 to learn more about a new campus publication. “Arcadia: Wesleyan’s Political Magazine,” a student-run publication, aims to be the University’s first multi-partisan political magazine, representing five core values: political engagement, discourse, accessibility, freedom of conscience, and pluralism. Hannah Skopicki ’18 conducted the meeting and will serve as the magazine’s editor-in-chief along with Matt Wallock ’18.

Although the magazine is just getting started, its website (arcadiamagazine.weebly.com) describes its mission and includes information on how to submit content.

Additionally, Executive Editors Joseph Nucci ’16 and Ali Mann ’17 will focus on writers and content leaning toward the Republican and Democratic ideologies, respectively. Six staff writers of varying political affiliations have also joined the team. Because the magazine is multi-partisan, this variety will ensure inclusion, according to the organizers. It was stressed throughout the meeting that submissions representing all views, not just those of the two main parties, are welcomed and encouraged.

“We really want to provide a platform for people of all different political ideologies along the political spectrum to present their viewpoints in a way in which they are guaranteed to be free of judgment and people harassing them based on what they think,” Skopicki said. “We want to expose people on campus to all different ideas that they may not have been exposed to before. We want to talk about things that people may not have even thought of before.”

“What excites me most is that there is such a broad base of political interest and experience here,” he said. “I mean, casting aside whatever true or untrue mythologies there might be about Wesleyan’s political attitudes, there are 3,000 people here, and each of them engages with politics in a different way. Ideally, we’d be able to tap into all 3,000 of those resources.”

Another key point emphasized at the meeting was the broad demographic which the magazine hopes to target. The founders intend for the magazine to reach a wider audience than just those studying the social sciences or those harboring a fascination with politics. Rather, the goal of the magazine is to integrate relevant information into an informative, entertaining, and readable publication.

Marshal Lawler ’16, President of the Wesleyan Democrats, attended the meeting and is excited about putting the magazine’s plans into action.

“I feel like [genuine interest] is sort of lacking, especially when it comes to partisan elections, especially about local politics,” Lawler said. “ I think that this will be a good way for people to engage more thoroughly with politics in general and change the way people have those conversations.”

Although it is not yet an officially recognized student group, Arcadia has received funding from the two campus political organizations. Emma Bentley ’17 will serve as the magazine’s business manager, working to create connections so that future editions will be published independently.

Following a thorough explanation of Arcadia’s aims and operations, Skopicki opened the floor for questions.

Spencer Brown ’18 inquired as to whether the publication’s debate section, where two students with different political affiliations engage in a written correspondence over a particular issue, will allow one with an affiliation other than Democrat or Republican to participate.

Skopicki responded that while for the inaugural issue they will be sticking with the two major parties, future debates are certainly open to those will all associations.

The publication is set to be distributed in early May. Currently, the goal is to publish one edition per semester, estimated at 40 pages. However, as the magazine gains momentum, the editors hope to publish on a quarterly basis.

The editors are looking for ways to publish outside of their print issues. They intend to maintain a social media presence, run by the magazine’s Outreach and Media Director Victoria Hammitt ’17.

Guenther is pleased with the evolutionary nature of the magazine.

“Just ten minutes ago, we were sparked by an idea that could be one of the better things we do all semester,” he said.

In the coming weeks, the editors are hoping for these ideas to come to fruition. Anyone interested in writing both short- and long-form articles as well as multimedia projects is welcome to join the magazine as a contributor by contacting anyone on the editorial board or emailing arcadiapoliticalmagazine@gmail.com. For more information, members of the Wesleyan community are encouraged to explore arcadiamagazine.weebly.com.