In Defense of Daniel Handler

An Open Letter to My Friends who Didn’t Hear Lemony Snicket Speak because “Daniel Handler is Racist.” 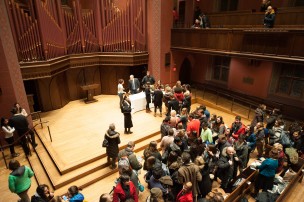 Some Wesleyan alumni become famous by not being themselves. For Daniel Handler ’92, this happened to include writing about the torture of orphaned children in his best-selling set of books, “A Series of Unfortunate Events.” Penned under the name Lemony Snicket, these books wove themselves into the fabric of my childhood. Some of my favorite memories come from paging through the dark, twisted story of the Baudelaire children, while occasionally wanting another sibling so my brother and I could act out their stories the way we did with the Magic Tree House books.

I was not the only one whom these books touched. Many on campus were excited to hear the author’s musings on life and excerpts from his new novel, “We Are Pirates,” when he came to speak at Wesleyan last Thursday, Feb. 5. The event was held in the Memorial Chapel in anticipation of the high demand.

However, not everyone was thrilled with the prospect of Handler’s visit to Wesleyan. When I asked my friend if she was excited to see Lemony Snicket’s real life counterpart, she gave me a look. In an ever-politically correct manner, she told me she wasn’t planning to go because “Daniel Handler is racist.”

Let’s set the record straight. When Daniel Handler hosted the National Book Awards in November 2014, it was his job to present the awards and comment on the authors receiving them. His close personal friend, African-American author Jacqueline Woodson, was due to receive an award for her novel “Brown Girl Dreaming,” a book touching on issues of race and growing up in the American South. Handler introduced Woodson with a story about eating gazpacho with the author, remarking on Woodson’s watermelon allergy. This comment alluded to a long and racist history of watermelon being used to mock African Americans, especially in minstrel shows.

Following the backlash to his infamous remark, Handler tweeted multiple apologies, agreeing that his comments were “monstrously inappropriate and yes, racist.” He also donated $10,000 and raised almost $200,000 for We Need Diverse Books, a grassroots organization that advocates for a greater spectrum of stories told in children’s books, whether across race, gender, LGBTQIA issues, or ability.

As heinous as Handler’s comment was, it was evident to me that he was genuinely sorry. He acknowledged that he was wrong, apologized to all his followers for his insensitivity, and donated money as a token of goodwill to an organization that he says “corrects hegemonic structure in publishing.” And at every talk he gives, including at Wesleyan, he either brings up the topic or apologizes for his past wrongs.

Was he right to make those comments? No. Would anyone else making the jokes have been justified? Also no.

We should absolutely hold Handler accountable for his words. But this incident does not unequivocally mark Handler as a racist who deserves to be ignored.

The other wrong in this situation is the common habit, especially at Wesleyan, of oversimplifying the world and sorting people into unequivocally good or bad. Writing off people and their entire life’s work because of one comment is nauseating.

We are all human beings. We are all flawed. And regardless of whether a person seems inherently “good” or “bad,” we are all capable of actions that would fall into either category.

For the same reason that we don’t discount all of Martin Luther King’s life’s work because he cheated on his wife, we shouldn’t crucify Handler for one mistake for which he not only apologized, but did everything in his power to repair. The absolutist mindset of good and bad means that one mistake could invalidate an entire human being.

When this tendency is taken to its logical extreme, Wesleyan students who oppose any kind of racism or wrongdoing should never watch a Disney movie again. They shouldn’t read any classic texts or novels for fear of finding a single detail that is not politically correct. They can never pick up a magazine, never turn on the television, never set foot outside.

Our society is filled with veiled racism, sexism, classism, and unconscious biases. But this doesn’t mean we can’t see the nuances or pick apart the shortcomings while still appreciating the inherent value of the things we’re criticizing.

In his Q&A at Russell House, Handler discussed how the Baudelaire children’s quest for knowledge in difficult situations echoed his experience at Wesleyan with a double degree in American Studies and English; although pursuing knowledge was a worthy endeavor, it did not fix society and did not fix him. He addressed how the Abu Ghraib scandal was so scarring for him that it worked itself into his writing through the torture of the Baudelaire children. He discussed his own brokenness, the epilepsy he endured in his last year at Wesleyan, and how he threw out his first novel as he learned to write a better one.

During the talk in the Memorial Chapel later that night, Handler held the audience spellbound with a reading from his newest book. He candidly spoke about how his father’s diagnosis of Alzheimer’s led to his protagonist’s struggle with the same disease. His dark, self-effacing humor was relatable to many in the audience.

Most importantly, he opened his talk with the fact that he came to the audience from a damaged place. He told the packed chapel that his racist comment preceded him and overshadowed the work of a dear friend. Every chance he gets, including onstage at his alma mater, he apologizes.

It’s a shame many couldn’t set aside their moral superiority long enough to listen.

Sonya Bessalel is a member of the Class of 2018.