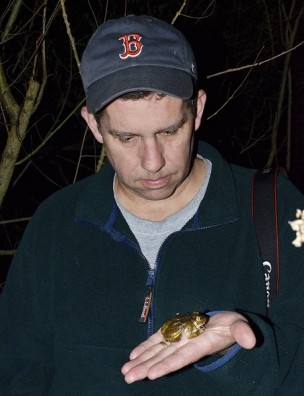 Dave Skelly, Professor of Ecology and Associate Dean for Research at the Yale School of Forestry and Environmental Studies, gave a presentation on Thursday, Feb. 8 on the increasing proportion of intersex frogs (frogs with both male and female sex organs, as determined by the presence of testicular oocytes, or ovular cells) in Connecticut. Skelly was part of a federal research group that investigated the root of this recent trend, which is popularly attributed to the use of pesticides and herbicides such as atrazine in agricultural settings.

Skelly, who specializes in field biology—taking samples from nature for further analysis—discussed his motivation in spearheading this study.

“[The study] was motivated by watching a very elaborate federal process systematically get it wrong,” he said. “There was no way we would figure out the nature of the problem nor what to do about it through the mechanisms in place.”

The event was organized by one of Skelly’s former students, Helen Poulos, Postdoctoral Teaching Fellow with the Mellon Environmental Studies Program at the University, in conjunction with the College of the Environment (COE). The COE holds numerous events and symposia throughout the year, in addition to hosting a think tank that consists of undergraduate students, three professors, and a scholar of prominence from outside the University.

Poulos described her motivation for coordinating the event.

“Dave was my former professor and when I joined the rest of the [COE] Think Tank this year,” Poulos said. “I thought his work would be nice to showcase.”

Skelly emphasized that the Environmental Protection Agency (EPA) is first and foremost a regulatory agency; it is neither equipped nor designed to carry out investigations. The official consensus of the EPA has long been that intersex population spikes were the result of pesticide and herbicide use on the agricultural scale, as popularized by a study authored by Tyrone Hayes, Professor of Biology at the University of California, Berkeley, which determined that the herbicide atrazine was responsible for such a spike in amphibians around agricultural areas.

However, Skelly has found data contradictory to that of Hayes’ research, namely that in Connecticut where the populations of green frogs with the highest rates of intersexuality were not in agricultural areas. Rather, they were in urban and suburban areas.

Skelly mentioned that the correlation between intersexuality rates and location is strong.

“The relationship is explaining about a third of the variation,” Skelly said. “You can flip it around this way: if you tell me the sex ratio of a green frog population, I can tell you with reasonable confidence what the landscape looks like around the pond. That is pretty remarkable.”

However, Skelly noted that the landscape of Connecticut is unusual due to the large integration of the four principal land types used in his research: undeveloped, agricultural, suburban, and urban. In a 200-meter radius, there are often three or even all four land types present, except in areas of pure forest. Therefore, what is true in Connecticut may not hold true in a less integrated landscape, such as that of Iowa.

After collecting 233 green frogs showing male characteristics from 24 ponds around the state (out of a potential 4,774 ponds that were screened) and dissecting the left testis, Skelly and his research team found that 31 frogs had testicular oocytes. Due to the highly representative nature of these ponds, Skelly determined that up to 13 percent of Connecticut’s green frogs show signs of intersexuality.

Further research in the town of Avon showed that the increasingly intersexual populations were based around sewage pipes and septic tanks. Skelly stated that sewage leakage is most likely responsible, and that this is consistent with prior research on intersexuality in fish populations.

“It is well established that there are hotspots of intersex just below sewage treatment plant outflows in rivers,” Skelly said. “The frequency of the abnormalities decays beautifully as a function of distance from that point.”

Having established the likely source of the increasing incidence of intersexuality in green frog populations, Skelly proposed some solutions for this environmental damage.

“One is to put carbon filters on septic tanks,” he said. “The technology is there. Another would be to treat sewer pipelines like natural gas pipelines. We don’t let gas pipelines leak because of the serious risks. Once we understand that sewer leaks carry risks, we should do the same. Everything we flush down a drain or a toilet ends up there. It is a spectacular diversity of stuff and it is not just disappearing.”

Poulos restated the importance of Skelly’s research, pointing out that environmental damage hurts people as well as animals.

“His work really identifies the importance of suburban planning and environmental regulation, as well as human health hazard awareness,” she said. “If frogs are affected, what about kids playing in the backyards of those same places?”

Skelly drove this home as well. While not everyone will care about frog intersexuality, this pattern is symptomatic of larger environmental damage.

“Some humans care about frogs,” Skelly said. “They will be concerned. But in fact, most may not be concerned. The next step in our work will be to test drinking water from wells in the same yards where we are sampling frogs. We already know that some of the [endocrine disruptors] we find in the pond water are also in ground water.”

Skelly is not done with his research and is looking forward to getting back to collecting more data. The correlation is strong, he says, but more research and studies are needed to establish a causal relationship between both sewer and septic leakage and frog intersexuality.

“We will be back out in the field once it stops looking like Ice Station Zero out there,” Skelly said.