Betrayal Captures the Intimacy of Deceit at the ’92 Theatre

Dan Froot ’16 and Sarah Woolf ’15 play Jerry and Emma, a couple in the midst of an extramarital affair. Betrayal, a reverse chronological story of love and distance, went up in the ’92 Jan. 29-31. 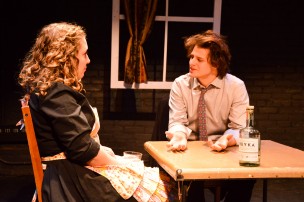 The production of Harold Pinter’s “Betrayal” directed by Linsin Smith ’16, the latest Second Stage production to be brought to the ’92 Theater, was not an easy show to attend. Each night, tickets sold out within a couple hours of the Box Office’s opening; it took two attempts at the waiting list before I finally managed to land a seat.

This was the case because the seating didn’t allow for an audience much larger than 50 strong. The seats were set up on the actual stage of the ’92 Theater, tightly circling a small living room set. The compact arrangement led to an almost uncomfortable closeness to the actors, and, considering the nature of the story being told, it worked brilliantly.

“Betrayal” questions the line between a love and an affair, and it revels in all the inevitable lies that occur in both. It begins at a bar, with Emma (Sarah Woolf ’15), an art curator, and Jerry (Dan Froot ’16), a literary agent, meeting for drinks. They’re both married with children, but they’re still trying to reconnect in the wake of a long and tenuous love affair. As the two have an awkward conversation, riddled with what is left unsaid, Emma reveals that the previous night she had confessed to her husband Robert (Brett Keating ’15), Jerry’s best friend and co-worker, about their affair. When Jerry later meets with his cuckolded friend, however, it’s revealed that Emma lied; Robert found out about the affair years ago and acted as if nothing happened.

From here, the play takes place in reverse chronological order. Minor changes of the set and costumes denote the changing years as the story glides from the affair’s termination to its beginning. “Betrayal” is a mystery that leads the audience through a quagmire of deceit. Characters describe an event in one way, only to then play it out completely differently, leaving viewers perpetually unsure of how much anyone really knows, and who can really be trusted.

The cast did a magnificent job of establishing this tension, bringing strange power dynamics to the love triangle. Froot captured Jerry as the haplessly infatuated lover, constantly falling on a humorous chuckle to try to dispel his genuine trepidations over his actions. This makes for a tragic pairing with Woolf, whose performance was loaded with unspoken power; whether she was with Jerry or her husband, she constantly conveyed a sense of an unfaceable tension narrowly concealed from everyone around her. Keating, whose character was possibly the most interesting in his capacity to rationalize the betrayals he suffered, was every bit the equal of Woolf and Froot. Throughout the entire show his friendly smile, coupled with a broad-shouldered stride, made it seem like he was about to sock somebody.

Interestingly, alongside the sorrow and heartbreak, there are also traces of dark comedy running throughout the play, mostly manifested in Jerry’s and Robert’s constant jabs at their feelings of futility at work. A bizarre but hilarious scene involves a nosey Italian waiter, played by Daniel Maseda ’16, who keeps interjecting into an otherwise very tense and uneasy conversation between the two men. Ironically, these small touches all managed to make the play just a little bit sadder, adding a sense of hopelessness to the characters’ bohemian lifestyles.

By the time the hour and a half-long play had concluded, it felt like there was so much to the story that had been left unsaid. The audience of the tightly packed room had been drawn physically and emotionally close to these characters, only to be constantly reminded that they could not be trusted and that they could not trust each other. For all the closeness of the set, “Betrayal” is ultimately a taxonomy of distance, a mapping of the infinities packed into silences and stretched across the short spaces between bodies. If there was a sharp cynicism to the play, there was also a distinct empathy: the need to, if not understand, at least explore the ways we fail ourselves and each other in love. Not cheery perhaps, but undeniably powerful.