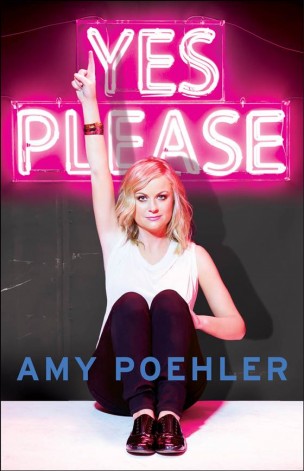 This past summer, I had the pleasure of attending the Del Close Marathon in New York City. Run by the Upright Citizen’s Brigade, the festival celebrates the art of improvisational comedy. There, shows ran one after another, starring comedy troupes from across the country and around the world. Even at three in the morning, when most of the theater was empty and everyone in the audience was either high or drunk, the shows continued, and every cast of comedians that walked onstage had the same energetic conviction that they were in this together.

Amy Poehler is the one of the founding members of the Del Close Marathon and the original Upright Citizens Brigade comedy group, and the emphasis on community that I noticed during the marathon is refreshingly evident her first book, “Yes Please.” Even in writing, she manages to get across the perspective that her life and her career haven’t been just about her. Instead, comedy has been a collective experience, shared with the people she most cherishes and loves. This has been made possible by Poehler’s consistent willingness and openness to answer in the affirmative: “Yes Please.”

Hence, the book can be barely considered a memoir. In fact, Poehler invites her readers to consider it as a scrapbook in her preface, “Writing is Hard.” The book’s structure runs in a seemingly random order, made up of essays, lists, poems, and pictures. Chunks of it are even written by her friends and family, inviting them to describe events in her life, such as her birth, her time at Saturday Night Live, and the creation of her hit television show, “Parks and Recreation.” This collaborative effort becomes even more evident in the audio version of her book, as Poehler literally brings some of the people referenced in her book into the sound booth to read aloud the sections they wrote or in which they are mentioned. A personal favorite is the dramatic reading of a haiku by Sir Patrick Stewart.

Poehler writes with little flounce or flair. To her, this book is a no-bullshit affair, and many of the essays willingly delve into private areas of her life, such as her divorce. However, what is particularly striking is how she manages to tackle these topics with grace and poise, never talking down to readers. In these essays, it quickly becomes evident of what makes Poehler so likable as a person and a performer: she’s a pal who will give it to you straight. She admits that she took drugs in an essay entitled, “Obligatory Drug Stories,” but she also stresses how she won’t ever tell her sons about her use. Similarly, she admits having body image problems in “Plain Girl vs. The Demon,” but she also encourages body positivity for women.

Given that Poehler’s book was published within a couple of weeks of the publication of Lena Dunham’s book, “Not That Kind of Girl,” the two works ask for some sort of comparison. After all, Poehler and Dunham are two of television’s leading comedic ladies and have both been lauded in the media as examples of modern-day feminists. Poehler even cites Dunham’s book in her preface as a source of inspiration while writing. However, their books, much like their work, have vastly different tones. They cover many of the same topics, but Dunham has a millennial-generation frankness that has the power to either attract or repel. Poehler has a mature wisdom. At the end of the day, she has been a wife, she is a mother, and she has had a longer career than Dunham has. Poehler simply has more life experience and more memories on which to look back.

“Yes Please” is perhaps not the book to sit down with and read cover to cover, as the pieces that constitute it don’t flow one into the other. Instead, it really works best as something left to sit on a bedside table and to be enjoyed intermittently throughout the day. In other words: improvise.