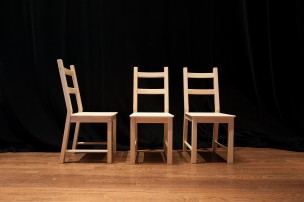 Virgil Taylor ’15 is set to challenge ’92 Theater norms this weekend with his participatory performance piece, “Evening Works.” Weaving together his interests in the visual arts and inspiration from 1960s performance art movements, Taylor will bring a refreshingly alternative take on the “stage” to a venue predominantly used for theater and dance.

Originally conceived as a joke between Taylor and Maya Herbsman ’17, his stage manager, “Evening Works” did not become a serious idea until Herbsman, who went to high school with Taylor and is an experienced Second Stage staff member, pushed him to go for it. Even though Herbsman’s role in the production is not as demanding as her previous, more traditional stage-managing duties, Taylor, a studio art major with minimal theater experience, said that he could not have completed the show without her.

“She was really my emotional blanket,” Taylor said.

When Taylor began putting together the structure for “Evening Works,” he drew from his own endeavors within his major and specifically from a class he took on performance art. As a painter and a printmaker who is not confined to a specific art form, Taylor focuses on themes and motifs of repetition in art, especially how they relate to our language and perception of everyday objects.

The “stage” will consist of 25 chairs, initially organized in a circle, in an area of white tile. The performance itself is divided into four distinct acts, or pieces, each of which will require that the audience rework its environment and interact with it in different ways.

Labeled “Chair Piece,” “Wall Piece,” “Room Piece,” and “Floor Piece,” the acts are constructed so the audience members themselves become performers as they take charge of the work of art. In the first two pieces, audience members will make multiple statements about the titular objects; through these statements, they will examine their relationship with the objects. In the third piece, the audience members will be able to interact with one another through a mock interview conducted in questions that are drawn from hundreds of common interview questions.

The show is reminiscent of Happenings, a form of performance art that emerged in the 1960s. Conceived to be performable essentially anywhere, Happenings are fundamentally multidisciplinary, interactive works of art. The audience is required to be actively engaged in the creation of each Happening through a set of instructions or a script. While there is no formulaic way to carry out a Happening, artists more commonly tend to plan out the key elements of the event while leaving room for improvisation, with the goal of eliminating the traditional boundary between the artwork and the viewer.

While Taylor borrowed plenty of inspiration and ideas from Happenings, and from the international movement Fluxus, he affirmed that “Evening Works” was not easily classifiable under these established labels.

“It’s too austere to be a Happening,” he said.

While there is no question that Wesleyan student theater abounds with innovation, a break from the traditional equation of the audience simply sitting back and taking in the performance is more than welcomed.