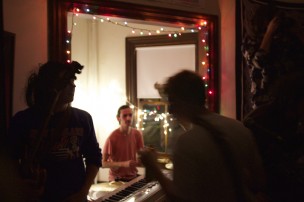 all-caps LADD is a group focused on transition, whether it’s the evolution from childhood to adulthood or from college student to post-graduate. As I watched LADD, composed of vocalist Jack Ladd ’15, guitarist Sam Wheeler ’15, bassist Bennett Gelly ’15, and drummer Piers Gelly ’13, open for Avi Buffalo at Eclectic on Friday, Nov. 7, I couldn’t help but feel this performance was a victory lap for a band already considering its next step. Regardless, just because this is a band at the start of its final bow doesn’t change the fact that LADD knows how to own a crowd and bring a seriously addicting blend of rock, pop, and indie rock to the table. This band plays the kind of music that makes you want to get up on a table and dance to your heart’s content until that table splits in half.

Mad in the Coatroom is all-caps LADD’s initial studio release and, though only three songs long, it provides a fleeting glimpse into the depth of Ladd’s addictive one-liners and the smoothness of Wheeler’s guitar licks. The EP serves as an intriguing statement for a group that has taken Grand Cousin’s—whose members graduated last year—mantle as Wesleyan’s premiere student band.

Mad’s first song, “The Kids,” starts off with an up-tempo old-school guitar riff, each eight-bar progression building upon the next until Ladd’s voice nonchalantly saunters onto the track. Wheeler’s guitar sets an upbeat and youthful tone that the band distorts as the trio of songs progresses. The song is steeped in a blithely repetitive guitar sequence but is rife with pop influences.

“The Kids” taps into the moment when parents realize their children are out of the house, out of their control, and essentially equipped to confront adulthood, if anyone ever really is. At the same time, for a generation of young adults in transition, the song represents one final grasp at the innocence of childhood and Ladd’s suggestion in the lines, “I’d like to take you to New York/ maybe we can start a band,” becomes increasingly urgent as Ladd’s vocals become muddled together until it’s clear he’s saying, “Don’t go.” Youth is certainly fleeting and perhaps LADD implies the dreams of our childhood are as well.

“Summer Nights” opens almost hauntingly and crystallizes the sense of loss of “The Kids.” Its woozy keyboard line meshes well with a baseline that parallels the weary sound of The National’s Scott Devendorf. On “Summer Nights,” LADD continues to wrestle with youth and a vanishing childhood, beginning to distort these ideas into more vivid feelings. The song is driven by a creeping baseline and a wistful cry: “Summer nights are over/ I miss the nights when you used to fuck me sober.” While the song begins to feel repetitive in both the progression of LADD’s instrumental layering of guitar and bass and its lyrical content—a malady that threatens “The Kids” as well—it is able to capture perfectly the nostalgia of the dog days of summer. Ladd looks back once again with almost bereavement, but in “Nights,” his perspective is tinged with regret and even guilt.

“Summer Nights” is not a shallow or preening attempt to capture the passion of summer love. Rather, it is an honest look at the aftermath of a summer romance and the way we reflect on it and allow it to characterize our behavior once the year begins. When Ladd admits, “I feel like shit for all the ways I fucked you over,” his voice descending into a dizzy and syncopated plea for forgiveness, it’s clear why the “summer days grow colder.” Ladd examines a relationship gone awry, and questions all the ways he could have salvaged it, rather than letting it dissolve into just another summer fling that ends in regret.

“Mad in the Coatroom,” the project’s eponymous track, concludes the record on decidedly different terms than the regret of “Summer Nights” or the thinly veiled melancholy of “The Kids.” It’s also far more expansive instrumentally than either of its predecessors, as Ladd and Wheeler are able to weave intricate guitar patterns that immediately declare a different experience. While “Mad” is still driven by its baseline, it’s more Gaslight Anthem than The National. In an EP driven so fully by each track’s instrumentals, Wheeler’s ability to improvise and play off drummer Piers Gelly ’13 and fellow guitarist Ladd sets a perfect tone here. “Mad In The Coatroom” sees LADD firing on all cylinders, as their percussion, guitar, and keyboard converge perfectly in a dazzling burst of sound. “Mad in The Coatroom” is my favorite song from the EP and represents LADD’s most fully realized piece on all levels.

On “Mad,” Ladd strives to expand his vocal range, and his lyrics are his most dynamic and daring. Throughout the EP, he is able to lace each track with ambiguous lines that serve as driving questions as the song expands. Of course, he is still “thinking about you” and trying to “get somebody to notice.” However, on “Mad in The Coatroom,” Ladd’s imagery is far more pointed: “She found a pack of bruised Camel Turkish cigarettes in my pocket.” His voice seems more focused, perhaps because “Mad” offers some allusion to a resolution of the questions Ladd poses in both “The Kids” and “Summer Nights.” When he sings, not without some hope, “She said I could finally get to rest my head soon,” the closure Ladd seeks so adamantly throughout the EP seems miraculously in reach.

Mad In The Coatroom is an EP about the lens through which we evaluate our childhood, filled with both pleasurable and regretful memories. Instead of judging or indicting ourselves for our past mistakes, it seeks to find the resolution that will make our next chapter more fulfilling.