The seventh annual conference addressed the importance of making a "collective impact." 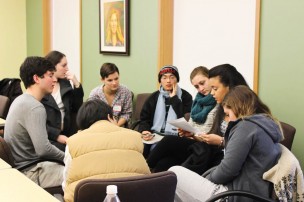 Human rights violations in North Korea, entrepreneurial strategies for human rights movements, and “slacktivism” all had a place at the table at the seventh annual Social Justice Leadership Conference, which was held in the Usdan University Center on Saturday, Nov. 9. Sponsored by the Office of Student Activities and Leadership Development (SALD), the event featured roundtable discussions and panels on a variety of social justice-related topics.

Assistant Director of Student Activities and Leadership Development Gretchen LaBonte explained the purpose of the conference.

“The goal of [the conference] today is to stretch yourselves,” LaBonte said. “Put yourselves out there today and really take risks.”

Organizers kicked off the event by establishing ground rules regarding respecting others and their privacy. This was followed by an activity intended to fostered a discussion about privilege and of how identity can be used to work toward the equality of others.

All attendees were provided plastic cups full of beads, and statements were read out loud. Participants were asked to add beads into their cups for positive statements and subtract beads for negative statements. Students were encouraged to drop the beads in a plastic cup to serve as a tangible reminder that individuals in the community can both struggle and be privileged.

One of the two panel discussions in the first block was hosted by Michelle Lee ’16 and Ji Sung Jung ’17, two members of Liberty in North Korea (LiNK.) Their discussion focused on educating members of the University community about the current situation in the Koreas, offering historical background and more information on the current human rights violations in North Korean prisons.

Lee stressed the importance of these commonly under-acknowledged issues.

“I really want people to be educated about human rights violations in North Korea, because the media only talks about how Kim-Jong Un hangs out with little American baseball players,” Lee said.

Lee and Jung hosted a concluding brainstorming session to discuss ways that the University community can help. They specifically addressed the notions of donating money to help prisoners reestablish their lives elsewhere.

“I think as a Wesleyan community, we always emphasize diversity,” Jung said. “It’s not only with people that relate to us; we try to reach out to any kind of people that we can. It’s definitely one of the things that people need to be more aware of, and if we can make a collective impact together.”

Another panel, hosted by Rachel Leicher ’15 and Aimée Jones Wilkerson ’17, focused on “slacktivism.” This term is used to describe the debate regarding whether sharing a cause via social media is an adequate means of activism. Issues debated ranged from the ALS Ice Bucket Challenge to debates over Israel and Palestine.

Jones Wilkerson explained her rationale for bringing this topic to the conference.

“Over the summer, there were so many…movements or historical movements that were happening that people had opinions on, and I saw a lot of people from the Wesleyan community comment on it,” Jones Wilkerson said. “I just wanted to see how social media really affected that, and [how it] affects activist movements.”

Throughout the panel, participants argued that Internet users were not doing enough to aid the causes in question. Others disagreed, asserting that spreading awareness online was still beneficial.

“It depends how you use it,” Leicher said. “Not all of activism is acting. Some of it is just talking about stuff, raising awareness. I think we just need a balance.”

The third panel was led by Director of the Patricelli Center for Social Entrepreneurship Makaela Kingsley. The workshop focused on using business and entrepreneurship principles to work for social justice and stressed the idea that everyone could be a social entrepreneur. Incorporating basics of business strategies such as the theory of change, market research, and human-centered design into her talk, Kingsley encouraged participants to use their passions and knowledge to work for causes they care about.

The day ended with a wrap-up by SALD intern Claire Wright ’16, who had each participant write one way they would work their knowledge from the conference into their lives at the University and beyond. She explained how the goal of the day was to educate people on a range of topics.

“I think the conference went really well,” Wright said. “People found ways to not only to take away individual thoughts from each of those workshops, but then to put them together and think about how they want to reform as individuals.”