Professors and deans gave updates on the Math and Science Scholars Program and the Posse Program. 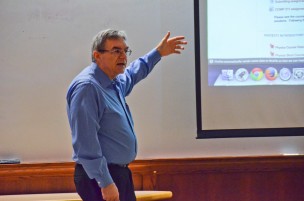 Faculty gathered in the Woodhead Lounge for the A(T)R luncheon on Thursday, Nov. 6, to discuss the Wesleyan Math and Science Scholars Program and the Veterans Posse Program. The A(T)R luncheon is a bimonthly lunch series meant to educate the faculty about programs and events on campus. Thursday’s luncheon focused on programs that were designed to increase the diversity of the student body.

Associate Professor of Chemistry T. David Westmoreland presented first. He discussed the nature of one course, CIS 121: Wesleyan Physical Sciences and Mathematics Scholars Colloquium, which aims to provide support and motivation for underrepresented groups in the fields of physical science and mathematics. These groups include first-generation college students, ethnic and racial minorities, low-income students, and women.

Last July, 11 students were brought to the University on an all-expenses-paid trip to spend four days learning at and about the University; 23 students in total were instructed through a complementary online class. The students who spent time on campus came from all over the country, including California, Alabama, and the U.S. Virgin Islands.

“I am officially the director and one of the instructors for the colloquium,” Westmoreland said. “More or less the clearinghouse for everything that has to be done.”

However, Westmoreland emphasized that many people played large roles in planning and organizing the program because of its interdisciplinary nature. Professor of Molecular Biology and Biochemistry and Dean of Natural Sciences and Mathematics Ishita Mukerji proposed the program after learning of the success of the Meyerhoff Scholars Program at the University of Maryland. The University approved the program late this spring. Numerous faculty and administrators, including Westmoreland and Mukerji, worked quickly to prepare for the applications and the program itself.

“It’s all been done on the fly,” Westmoreland said.

Westmoreland said that the program has thus far been successful, but that it is too early to say whether or not the program will succeed over the next two years.

“The group of students has formed a tight cohort, but it is too soon to judge the overall success,” Westmoreland said. “We will be surveying them relentlessly over the next year and a half.”

The weekly colloquium introduces students to a different math or science professor each Friday, who in turn teach from a broad range of topics, from preparing for midterm exams to learning about mindfulness with Rabbi David Leipziger Teva. The summer session on the University’s campus focused heavily on graphing, a 3-D printing project, and a research poster presentation, while the online portion of the course focused on physics, chemistry, and computer science. Westmoreland referenced the large role that the faculty played in organizing and running the Math and Science Scholars Program.

The second presentation, led jointly by Dean of Admission and Financial Aid Nancy Meislahn and Jane A. Seney Professor of Greek Andrew Szegedy-Maszak focused on the Posse Program, the second new measure to increase diversity on campus.

Szegedy-Maszak explained the mission of the program.

“The mission of the Posse program, specifically the veterans’ program, is to identify individuals who have unusually strong abilities, maturity, commitment and focus and bring them, in a group of 10, to a high-quality college or university,” Szegady-Maszak wrote in an email to The Argus. “Once there, the Posse scholars take a full course load and are also expected to interact with, and perhaps become leaders among, the other students. This is all pretty abstract, but the key elements are careful selection and then continuing support so that the vets can succeed.”

During the presentation, Meislahn commented on how Posse has helped student bodies across the nation become more diverse.

“Posse has a template that’s been very successful at bringing students of color to campuses that are not too diverse,”  Meislahn said.

In 2008, a scholarship for veterans was founded for the University, enabling Wesleyan to more actively recruit veterans. However, these efforts resulted in only one or two veterans per class year. Meislahn commented on the difficulties of finding and paying for veterans on the program.

“It was like looking for a needle in a haystack,” Meislahn said. “It was immensely time-consuming and not very productive.”

Vassar College was the first school to partner with Posse in bringing veterans to campus. After a successful year in which 10 veterans studied at Vassar, Meislahn contacted Posse about a similar program for Wesleyan.

In the presentation, Meislahn explained that the veterans were subjected to the same admissions process as other potential first-year students. The only difference was an additional interview and more emphasis placed on their recent performance at community colleges than on their high school transcripts.

Szegedy-Maszak commented on the Posse students’ adjustment to campus life.

“It’s been generally very smooth, in terms of the social aspects,” Szegedy-Maszak wrote in an email to The Argus. “The Wesleyan students have been great in terms of friendliness, openness, welcoming the Posse. The Posse scholars have found that the academic demands are much more rigorous than any they’ve confronted so far, and they’ve been working incredibly hard at their classes.”

The students are taking a variety of classes, with interests ranging from Chinese to economics to computer science. Additionally, Meislahn and Szegedy-Maszak stated that they were happy to see how well the students have woven themselves into campus life.

The program focuses heavily on cohort building, much like the Math and Science Scholars Program.

“I was on a three-day retreat with the group over the summer, and I’ve been in pretty much constant contact with them since that time,” Szegedy-Maszak said. “We meet every week as a group for one and a half to two hours, and I meet with each individual every other week for an hour. In addition, I have an hour phone call every week with the Posse trainer at the central office in New York.”

However, despite the frequent meetings and shared experiences of the cohort, the University aims to prevent the creation of an insular community.

“That’s not what this program [is] about,” Meislahn said.

The students are housed in buildings all over campus, including dorms, HiRise apartments, and wood-frame houses.

Both programs are in a trial phase, and their long-term futures will be determined over the next few years. The Math and Science Scholars Program has enough funding for two years, though Mukerji has requested funding from the National Science Foundation and Westmoreland discussed the possibility of an outside donor. The University is planning on running cost-benefit analysis at the end of the two-year period to determine the efficacy of the program.

As for Posse, the University has entered a four-year contract with the organization, after which that program’s efficacy will also be evaluated.