Inside the Ballot Box: A Guide to the CT Election

Baffled by the ballot? Read the Argus's guide to today's election. 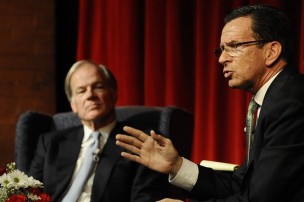 There is a certain grandeur to Election Day, whether the election is presidential, local, or gubernatorial (as it is this year). Between the suspense of the long lines and the secrecy of the ballots, it can be easy to get caught up in the excitement of the officialdom of it all. But don’t let the thrill of write-in votes and referenda impair your judgment this Election Day. Filling in bubbles is undeniably satisfying, but you could pay a steep price if you choose the wrong one. Before you get behind that curtain, educate yourself on the candidates and issues at hand by using The Argus’ comprehensive guide to this year’s elections. As they say in the White House, check yourself before you wreck yourself.

Dannel P. Malloy and Nancy Wyman (Democratic Party): Malloy is the incumbent governor of Connecticut, running for re-election to a second term in office. Wyman, who served as State Comptroller of Conn. from 1995 to 201, is the incumbent Lieutenant Governor. In the past year, Malloy has increased the state minimum wage to $10.10 an hour and has received a $6.5 million increase in the state budget for a rebate program for senior renters. Additionally, the CT Department on Aging and Elder Services was established under Malloy’s administration. In the past four years, Malloy has established several working groups that investigate specialized issues. These have included the Sandy Hook Advisory Commission, the Intellectual and Developmental Disabilities Working Group, and the Family Child Care Working Group. Malloy intends to continue to enact and broaden this system. This time around, Malloy also hopes to create more blue-collar jobs, believing that this will help put an end to inner-city violence. He also plans to enact stricter gun legislation laws.

Thomas C. Foley and Heather Somers (Republican Party): Foley, the former United States Ambassador to Ireland, ran for Governor against Malloy in 2010 and lost by a margin of 0.5 percent. Somers currently serves at the Town Council of Groton, Conn. Foley plans to create more high-paying jobs and to eliminate unnecessary regulations and paperwork for those seeking jobs. He also plans to reduce sales tax by 0.5 percent and to lower property taxes. Additionally, Foley plans to implement a “money follows the child” policy in public schools, which would allow students grants based on their financial needs.

Rosa L. DeLauro (Democratic Party): DeLauro has served as the U.S. Representative for Connecticut’s 3rd congressional district since 1991. DeLauro is one of the most liberal members of the House and is responsible for founding the Congressional Progressive Caucus, an organization within Congress’ Democratic Caucus that puts liberal issues at the forefront. DeLauro is particularly invested in women’s health and believes that abortion should be a choice made available to women in all cases. DeLauro supports stricter gun control laws and introduced a bill in 2013 that provided compensation in the form of tax credits to those who voluntarily surrendered firearms.

James E. Brown (Republican Party): Brown, who taught high school math from 1992 until 2013, plans to establish term limits for members of Congress. He also intends to replace the Affordable Care Act with free market solutions, to establish and enforce a uniform system for the naturalization of citizens, and eliminate overly complicated regulations from the tax code. Brown’s website additionally lists the elimination of “any and all laws that favor a race, gender, religion, sexual orientation, political faction, etc. over another group” as a goal of his campaign.

Paul Doyle (Democratic Party): Doyle is currently representing, for his fourth term, the residents of the 9th State Senate District, which includes Middletown. Doyle is the Senate Chair of the General Law Committee, as well as Vice-Chair of the Judiciary and Housing Committee and a member of the Regulations Review Committee. Last April, Doyle supported the passage of a law that clarifies discrepancies between cash and debit prices at gas stations. He also supported a commitment to provide 50,000 children in Middletown with a high-quality pre-K education over the course of 10 years.

Earle V. Roberts (Republican Party): Roberts is a late addition to the ballot after the previous candidate dropped out a few months ago. Roberts hopes to reform public campaign financing, arguing that candidates who support lowering taxpayers dollars should not be using tax dollars toward their campaigns. Previously, Roberts served on the Middletown common council and the South Fire District board.

Joseph Serra (Democratic Party): Serra has represented the 33rd District in the General Assembly since 1992. In September, he was represented with the 2014 Citation for Exemplary Service to Public Works Award by the American Public Works Association. Serra has helped create several initiatives to improve public infrastructure in Connecticut, including a major piece of legislation that replaced the bridge on the Middletown/Cromwell town line with a four-lane road.

Linda Szynkowicz (Republican Party): Szynkowicz plans to lower taxes in order to increase revenue and eliminate welfare. According to Szynkowicz’s website, “The Welfare program was put in place years ago as a temporary way to help those until they got back on their feet. It was not meant to be a life time occupation.” Szynkowicz plans to offer senior citizens discounts on cable services and has proposed the “What’s up Doc Bill?” (sic), which would halve the cost of a patient’s doctor’s office visit if he or she must wait an hour and eliminate the charge completely if that wait is more than half an hour. Szynkowicz also considers Connecticut’s newest gun law “a knee jerk reaction” and plans to repeal it if elected.

Secretary of the State:

Denise Merrill (Democratic Party): Merrill is the incumbent Secretary of the State. Her major goals have been to support small businesses through the use of cutting-edge technology and to modernize elections by establishing online voter registration.

Peter Lumaj (Republican Party): Lumaj plans to facilitate close communication between state and local governments and to eliminate taxes that may be harmful to small businesses. He also intends to implement a policy that would require voters to present a voter ID at elections.

Mike DeRosa (Green Party): DeRosa is the founder of the organization V.O.T.E.R., which played a major role in passing a legislation that requires electronic voting machines to print paper copies of votes in order to prevent voter fraud.

Denise L. Nappier (Democratic Party): Nappier is the incumbent State Treasurer and the first African-American woman to be elected to a statewide office in Connecticut. Under Nappier’s legislation, the Treasury’s Short-Term Investment Fund has earned the state government, local governments, and taxpayers $189 million.

Timothy M. Herbst (Republican Party): Herbst currently serves as First Selectman of the Town of Trumbull. Herbst plans to lower taxes and believes that the tax increases that Connecticut has undergone recently are unsustainable. If elected, Herbst would request to be placed in a less powerful position than Nappier has occupied in order to decrease the risk of misguided investment and fiscal decisions.

Rolf W. Maurer (Green Party): Maurer is the Co-Chair of the Green Party of Connecticut. He hopes to reform Connecticut’s finance system in a way that focuses on “local- and publicly-managed approaches” for stimulating the economy. He also prioritizes altering the economic infrastructure to rely heavily on the production of hemp.

George Jepsen (Democratic Party): Incumbent Jepsen is finishing up his first term as Attorney General and focuses on pushing accountability in the financial crisis, protecting homeowners, and investigating breaches of data security.

Joseph D. Martino (Democratic Party, unopposed): Martino is seeking his re-election for an eighth term as Judge of Probate for the District of Middletown. A Judge of Probate is a member of the Connecticut judiciary. Probate courts deal with matters of estates.

Sandra L. Faraci (Democratic Party): Faraci has served as the Democratic Registrar of Voters since 1997. She leads local voters in registration sessions and works to educate citizens on the process of voting.

Janice A. Gionfriddo (Republican Party): Gionfriddo has served as the Republican Registrar of Voters since 1998.

Question 1: “Shall the Constitution of the State be amended to remove restrictions concerning absentee ballots and to permit a person to vote without appearing at a polling place on the day of an election?”

Currently, Connecticut is the state with the highest restrictions on absentee ballots in the U.S. These restrictions have been in place since the Civil War. As the Connecticut population ages, the number of full-time caregivers in the state is rapidly increasing. The State Constitution, however, does not currently consider the obligation of caring for the elderly or disabled a valid reason for receiving an absentee ballot. Voting “yes” to Question 1 would eliminate constraints on the process of receiving an absentee ballot, thereby allowing those who are confined to their homes or workplaces to vote. Voting “yes” to Question 1 would also allow residents to vote early in elections.

This question is the most politically controversial, with Democrats in favor of reducing restrictions in order to increase voter access and Republican opposed due to expressed concerns over voter fraudulence.

There is no clear party divide on this question. Those who are in favor argue that longer terms will allow officials to focus on business rather than on campaigning, whereas those opposed say they want the ability to remove officials more quickly.

Question 3: “Shall the bond limit that the Common Council may approve without going to referendum to be raised to 1,000,000?”

The current bonding limit, the amount of money the Common Council can borrow without a referendum, is $750,000. In the past, the Council has received funding for expensive projects by borrowing it in $750,000 increments.

Question 4: “Shall all other Charter Revisions as approved by the Common Council be approved?”

The report and its revisions were accepted in the last Common Council meeting. A “yes” vote on this question would change the wording of two titles of official government positions listed in Middletown’s Charter, in addition to eliminating language about the sheriff from the Charter. These would be strictly clerical changes that would not affect the positions themselves.

Question 5: Shall the $750,000 appropriation and debt authorization for the planning, design, acquisition, and construction of the combined sewer overflow separation program and related water main, sewer main, and road surface relocations and improvements in connection with such program, pursuant to the ordinance adopted by the Common Council on Sept. 2, 2014, be approved?

The city of Middletown began addressing Combined Sewer Overflow (CSO) issues in 1989. A “yes” vote would allow for work on the final part of this series of projects.