The ’92 Theater hosted the first half of dance theses. 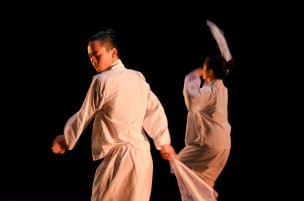 Six female performers in black clothing and with severe ballet buns kicked off the Fall Senior Dance Thesis concert in the Patricelli ’92 Theater this past weekend. Featuring choreography by seniors Tess Jonas, Stellar Levy, Miranda Orbach, Ibironke Otusile, and Min Suh and starring a cast of performers from the University Dance Department, the five pieces of the concert—the first halves of the majors’ 20-minute theses—complemented one other and formed quite a fascinating collection.

Orbach’s “reconfigured//form,” which turned out to be the most dramatic piece of the evening, allowed each dancer to enjoy a proper introduction to the audience, either through a delayed entrance or a pose. Dimensionality was key, as dancers often made contact with the floor, either crawling across the space or moving their limbs across the surface. They kept their leg and arm extensions low, with lines often broken either at the knee or the ankle. The loveliest moment came when all of the dancers moved together, traveling across the stage in concentric circles.

Employing the use of metal barres and a patch of what appeared to be moss or grass, Levy’s “a thousand kisses deep” began to the sound of the sea. Comprised of seven dancers, this cast felt most like a professional dance company. With definite maturity and mutual unity, the dancers created logical, harmonious movement on both the stage and when climbing to-and-fro on the barres. With the dancers flexing and circulating parts of their limbs, this piece broke down the human anatomy into small individual partsbest exemplified in the cast’s sole male dancer and the continuous isolated movement of his torso. His physical control and energy was impeccable.

In contrast with “a thousand kisses deep,” Otusile’s “Imole” was the evening’s most intimate piece. Opting for no music, this piece relied solely on the partnership and relationship between the two dancers onstage. Although blindfolded, the dancers’ movements were confident, running across stage in loud, percussive stomps. The two dancers would often separate before calling out to each other and reuniting through the use of voice and touch. This call-and-response broke the continual tension on stage, as the dancers grew bolder and bolder in their jumps and leaps. “Imole” luxuriated and took advantage of time, often allowing for long pauses between frantic, loud movements, demanding attention to be paid to every gesture, pose, and sound.

“Fever Dreams” by Suh incorporated elements of Korean dress, dance, and music. Dressed in white hanboks (traditional Korean semi-formal clothing) and armed with silk scarves, the dancers moved in ambulatory circles similar to a Korean traditional folk dance. While this piece used four performers, the choreography divided the group into partnerships of two, which created fascinating vignettes, so to speak, as the partners touched, met, and guided each other throughout the stage. This element appeared unconventional at times, with dancers supporting each other’s near acrobatic poses and balances.

Closing the show, Jonas’ “inside voice” mixed the cast’s own spoken word with a musical soundtrack, Her piece was a physical and emotional triumph. Relying only on a single lightbulb, the dancers followed the light and moved either as a whole or in groups of two. The mixing and matching of these dancers enabled some of the most interesting, brief partnerships and lifts, in turn creating a communal, almost familial voice, as evidenced by the continual loops of the dancers wishing each other love and happiness. There was a beautiful sense of symmetry as dancers transitioned on and off stage before returning to dance again with each other.

Despite being works-in-progress, the performances at the Fall Senior Dance Thesis Concert were delights to behold. The second halves of the theses will surely delight at the upcoming Spring concert.