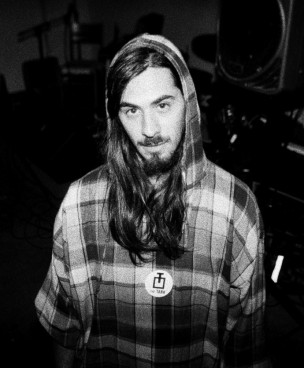 The condition of tinnitus, in its most common form, creates a sound that is totally subjective, a frequency that can only ever be heard by whomever it afflicts. Whether it takes the form of a ringing, hissing, or clicking, the noise makes itself a way of life for its host. When explaining his own experience with the condition, University graduate student Daniel Fishkin makes it clear that uncontrollable sounds are ever-present.

“I hear different things all the time. It comes and goes, grows and swells,” Fishkin said. “Doctors told me to get used to my tinnitus; I decided not to get used to it but to use it.”

Fishkin’s “Composing the Tinnitus Suites: 2014” is both a confrontational tour of the nature of tinnitus as well as an ode to his own relationship with the condition. He performed the 35-minute piece, part of his larger show “Transitions,” this past Tuesday at the World Music Hall. The Lady’s Harp, a musical instrument and installation of Fishkin’s own creation, was the centerpiece of the suite: He would manipulate a feedback amplifier connected to a set of 25-foot-long piano wires, carefully adjusted by Gabriel Greenberg ’14, Adam Johnson ’14, and Noah Rush ’14, sending a haunting, whining frequency throughout the room.

Most striking about “Composing the Tinnitus Suites: 2014” was the powerful experience of loneliness and isolation that it evoked. The slowly morphing frequency began shrill and discomforting; its frequency and volume were so overpowering that I could actually feel my sternum vibrating. Literally, this music was ear-piercing. Yet as the suite proceeded my ears adjusted to the subtle dimensions of the never-static sound in a way that demanded my absolute focus.

When the lights dimmed to accompany one movement, it genuinely felt as if part of the world around me had been swallowed up, leaving me alone within this all-enveloping resonance. At some points, an unpredictable dissonance interrupted the regularity of the sound. It was a surreal phenomenon when the tone my ears had struggled to adapt to suddenly came to an end and was replaced by sharp applause.

This strange experience of dealing with a sound that seems to come not from without but from within, is something that Fishkin has had to deal with for the past six years. His tinnitus first emerged while he was working on his senior recital in music composition at Bard College, causing a ringing that grew painful during loud noises. The new pain associated with music also caused a creative block; Fishkin found himself growing increasingly distrustful of his former passion.

After composing—at least in the way he had previously conceived it—was rendered impossible by his condition, Fishkin began to study circuitry, which eventually led him to experimenting with amplified feedback. He also steadily discovered more about tinnitus, finding inspiration not only from other afflicted musicians but also from the story of William L. Morris. The sheriff of Greene County, Va., Morris suffered tinnitus after being hit by stray buckshot. He killed himself in 2010, and in his suicide letter, he blamed the roaring sound in both ears.

“I hope that my death will help bring about some cure for those that suffer with tinnitus by bringing attention to it. It is important that my life will not be wasted,” the letter reads.

Fishkin calls the “Tinnitus Suites” his lifework, and he hopes it won’t go to waste either.

“I think tinnitus is stuck on the margins,” Fishkin said. “I want to cure tinnitus; I want to create an urgency.”

When Fishkin talks about his musical process, he is eager to avoid any labels of innovation or novelty. Although his work does fit within the experimental tradition, Fishkin also likes to cite his early background in punk music, a genre in which talent and skill sometimes aren’t always as vital as tenacity and dedication to producing one’s own sounds.

“From punk rock, I learned that I didn’t have to be a master of something in order to devote my life to it,” Fishkin said.

Even for constructing the Lady’s Harp, Fishkin refuses to accept full credit. He explained that the name of the instrument is a tribute to the composers Ellen Fullman and Maryanne Amacher.

What Fishkin played on Tuesday was the fourth incarnation of the “Tinitus Suites,” with previous versions receiving performances in Philadelphia, Brooklyn, and Greensboro, N.C. Fishkin’s next rendition, “Composing the Tinitus Suites: 2015,” will take place at Wesleyan in late March.

So far, he’s earned a wide array of positive feedback, including an article on the “Suites” on Nature.com. After this was published, Fishkin received a multitude of emails from neuroscientists commending his work. Fishkin is also currently an ambassador for the German-based Tinnitus society Deutsche Tinnitus-Stiftung.

And yet, Fishkin said he is constantly struggling to adapt his work to best convey the experience that he and many others endure. Fishkin told one story of a close friend who also suffers tinnitus and came to see the “Suites.”

“She had to leave after two minutes,” Fishkin recalled. “She said, ‘You got it!’ But I felt I’d failed. I’m not trying to convey it: Tinnitus has no acoustic composition. I also felt I failed a fellow sufferer. Advocacy is a critical part of my work.”