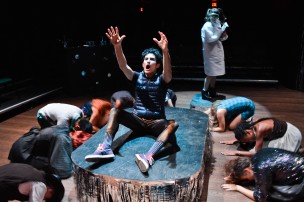 The ’92 Theater is no stranger to the edgy and fantastical. This weekend’s “Song for a Future Generation” is set to light up the theater’s stage with futuristic extravagance. Written by playwright Joe Tracz and directed by May Treuhaft-Ali ’17, the ’80s-themed dance party show marks the second weekend of Second Stage’s fall season.

Set at a party on a space shuttle orbiting an exploding star, “Song” stars 13 time travelers, shape-shifters, aliens, and psychics. The concept and character design are based off the hit 1983 single of the same title by the B-52s, and the play’s costume and set designs are set to resemble those of the song’s music video.

Treuhaft-Ali saw the play around four years ago when one of her high school teachers directed it, and she dreamt about setting it up ever since.

“I saw this play and I just thought: Wait! You don’t know me, but you wrote me into a play,” she said, adding that she instantly connected with both the otherness and familiarity of the show: “This thing is literally my life!”

Treuhaft-Ali said she developed a personal connection with the characters and setting that pushed her to reconnect with the world with which she had immediately fallen in love.

“I wanted to direct this play because I wanted to give other people the feeling of: ‘I never want to leave this world,’” Treuhaft-Ali said.

She compared the play to WesRave, the annual silent rave in which students plug their headphones in and blast the same playlist at the same time, dancing all over campus to celebrate the end of classes and the year.

“It’s super-duper fun, and it’s this kind of thing that happens just because it can and because we’re all crazy adventurous college students with a lot of energy,” Treuhaft-Ali said. “But then you take off your headphones and you’re disconnected.”

For Treuhaft-Ali, “Song For A Future Generation” was essentially about expressing that notion of disconnection through a big party as the various quirky characters struggle to understand what their role is within the crowd. Everyone is having fun together, but no one is actually getting much individual attention. Moreover, the show aims to raise various questions pertaining to young adults’ quest for belonging.

“What if I’m not original? What if I’m just a clone? What if I’m incapable of truly connecting with people?” Treuhaft-Ali asked. “It’s about a lot of scary things.”

Going up from Thursday, Oct. 9 through Saturday, Oct. 11, “Song For a Future Generation” will shine a glimmering light on the various difficulties of relating to others in this stage of life while guaranteeing a tremendously fun night. While there is no shortage of plays that attempt to address these issues, “Song” is a must-see for the unique way in which it approaches them.

Although the show’s title may imply the presence of an authority figure in the story, the cast is devoid of patriarchal or matriarchal characters. Instead, the plot implores the young characters to seek their own independent paths.

“It’s up to all the characters to figure out what to do with themselves and their problems,” Cummings said. “I think that’s what’s important about this play and what makes it so relatable.”