Football Lights Up the Scoreboard with Six Touchdowns in Home Opener 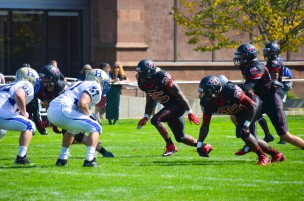 Wesleyan football has beaten Middlebury and Hamilton by a combined margin of 30 points, making this the third consecutive season in which the team has started off with a 2-0 record.

Head Coach Mike Whalen said that although the Cardinals emerged victorious from their game against Middlebury last week, it was a tough run for the team.

“I think we had hoped that we would come out and be sharper in the early going of the game,” Whalen said. “Last week, we played a really big game against Middlebury. With both teams going 7-1 last year, not playing last year and tying for a share of the conference title, it was a very physical and emotional game. We came back this week with a little bit of a hangover. Even though we intercepted the ball on defense and scored early, that was almost the worst thing that could happen, because it made us relax a little more than we should have. With a very experienced group of seniors, every time they would make a run, we would come up with a big stop.”

Still, the Cardinal defense picked up right where it left off for its Family Weekend game against Hamilton. Corwin Stadium was loaded with fans and tailgaters, and the Birds picked up a 43-21 victory over the visiting Continentals. For the second straight game, the Birds’ defense recorded a pick-six. Captain Jake Bussani G’14 jumped a curl route near the Wesleyan sideline and returned it 52 yards, scoring for a 6-0 lead. This was much to the delight of the pep band, which followed the touchdown by blasting the Fight Song. Ike Fuchs ’17 would complete the extra-point attempt.

Running the pistol-offense formation, the Continentals responded to the Wesleyan score with a good drive of their own. After moving 38 yards down the field and completing a few first downs, Hamilton found itself in Wesleyan territory at the 35-yard line. Next, the Continentals ran a flea flicker as the quarterback handed it off to the running back, feigning a run play, but then the runner tossed it backwards to the quarterback, who launched it downfield to the wide receiver. Hamilton executed the play to perfection, finding the pass catcher in the corner of the end zone to even up the game at sevens.

“It was a good play call,” Whalen said. “They executed it well. Sometimes you just have to say, ‘Hey, they got us.’ With a younger team, people keep reflecting on the past. We always say on defense that you have to have a short memory. Football is a 60-minute game and there are going to be a lot of swings of momentum. You have to put it behind you and make the next play count.”

On the Redbirds’ following drive, they had the ball in their own zone on a third and nine. Quarterback Jesse Warren ’15 found his receiver, Josh Hurwitz ’15, and had enough yardage to move the chains, but after trying to extend the play, Hurwitz coughed up the football and Hamilton recovered possession. The Wes defense stood strong following the turnover, though, and forced the Continentals to punt.

Wesleyan started the next drive deep in its own territory and would go three and out. On fourth down, Warren flipped the field position when he sent a booming 61-yard punt and pinned the Continentals at their own ten-yard line.

Shortly after, linebacker Alex Daversa-Russo ’16 came up with the second interception of the afternoon for the defense when he sat in zone coverage and waited for the opposing quarterback to throw the ball into his hands. His return of 13 yards set up the offense only seven yards away from another touchdown. After two wildcat formation runs from Devon Carrillo ’17, starting halfback Kyle Gibson ’15 finished the job, running it in from one yard out to give Wesleyan a 13-7 lead. Fuchs converted the extra point.

The Cardinals opened up the second quarter with another score, topping the 60-yard drive off with a 5-yard pass on a flat route from Warren to tight end Ben Kurtz ’17.

Hamilton would answer on its next drive with a touchdown, returning the game to a one-possession difference. They drove 59 yards in just over seven minutes and capped off the drive with an 18-yard touchdown pass. The score would remain 21-14 until halftime.

Wesleyan would go on to outscore Hamilton 22-7 in the final two quarters. The Cardinals received the ball first in the second half, but were forced to punt. Warren downed the Continentals at their own one-yard line. Two plays later, captain Donnie Cimino ’15 and Jake Siciliano ’15 would team up to tackle the Hamilton running back in his own end zone for a safety, giving the Cardinals a 23-14 advantage.

After the safety, the Cardinals got the ball back and capitalized on their next possession. It took them only seven plays, which lasted just over three minutes, to drive 55 yards for another score. Jordan Fabien ’15 and Jon Day ’15 each had long receptions on the drive: 14 and 26 yards, respectively. A three-yard rush on a pitch play to the right by Lou Stevens ’17, plus an extra point, made the score 30-14 in favor of the Redbirds.

Another strong performance from the Wes defensive unit would force Hamilton to punt. The drive started off with a bang, when Warren completed a 39-yard pass to Hurwitz that set the offense up with first down at the Hamilton 17-yard line. Following three consecutive Gibson runs, Warren found Kurtz again for his second five-yard touchdown catch of the afternoon.

Hamilton refused to throw in the towel, though, next mounting an impressive 14-play, 80-yard drive in 5:23 that ended in a touchdown.

Wesleyan would continue to push on its next drive, with Gibson carrying most of the workload. He totaled 45 yards on two runs, including a 28-yard touchdown scamper. After a failed extra point try, the game’s ending score was 43-21.

The Cardinals will look to continue their winning ways when they travel to Colby next weekend on Saturday, Oct. 4, for a 1 p.m. contest. The Birds bested the Mules last year, 41-0. Whalen spoke about the keys to a victory over Colby next weekend.

“Our seniors believe that we didn’t prepare the same way that we did for Hamilton as we did for Middlebury,” he said. “We were crisper and more physical the first game. We have to go back to that way and eliminate some of these mistakes that we made. Anytime you travel up to Maine, it’s going to be a tough game. Colby is a physical team, and we are going to have to play well to get a win up there.”