Lieutenant Paul Verrillo starts “Lock It or Lose It” Campaign. 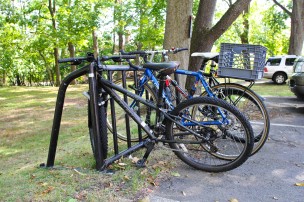 In response to a recent chain of bike thefts on campus, Public Safety Interim Captain Paul Verrillo has started a new campaign, titled “Lock It or Lose It.”

“We’ve had a rash of bike thefts in the beginning of the year,” Verrillo said. “It actually started toward the end of last year. There’s been some youths coming up here, and a couple of them have been arrested. In the beginning of this year in September we started our ‘Lock It or Lose It’ campaign. The majority, like 95 percent of the bikes taken up here, have cable locks. They’re easily cut.”

Verrillo stated that one suspect was apprehended last week.

“There was a kid up here last week that was stopped by us, and subsequently arrested by the Middletown Police, that had bolt cutters,” Verrillo said.

Cable locks, a common and convenient security measure, have proven to be largely ineffective in preventing bicycle thefts this year. Aaron Stryker ’18, a victim of the current wave of thefts, stated that his bike was stolen while locked in front of his residence.

“I had a standard number combination chain lock that I guess someone cut,” Stryker said. “It was stolen in front of 156 High Street [when it was] attached to one of the bike racks there. It was in the first few days of classes, Monday or Tuesday.”

Hardened steel U-locks, which are difficult to cut or break, are being promoted by Public Safety as the safer alternative. One of three main steps in the “Lock It or Lose It” pamphlet states that one should use a strong, reliable U-lock to fasten the bike properly to a bike rack.

Brandon Ho ’18 stressed the importance of a U-lock.

“If you want to be really safe, you can use two U-locks,” Ho said. “Most of the time, when you lock a bike, you can only lock the frame to the bike rack or the wheel to the bike rack. But that’s not always the most secure method, because you either risk someone stealing your wheel or stealing your frame if you don’t lock it correctly.”

While some students take great care for their bikes’ safety, others take few or no steps to secure their bikes. Verrillo expressed his irritation with this trend of student behavior.

“The most frustrating part right now for me is the cable locks, and it’s the unsecured bikes,” Verrillo said. “There’s a bike at the Science Center right now that has one of our locks around it. One of our officers was walking, and the bike didn’t have a lock on it, so he put one of our U-locks and he left a note on it: ‘Please call Public Safety when you get back to your bike.’”

Verrillo expressed hope that increased security will deter prospective thieves. He warned that even if a bike is locked, a thief may steal individual parts of the bike, such as a seat or tire. This stealing of bike parts off of a locked or unlocked bike is a trend that has increased along with total thefts.

“You can’t put a lock on everything,” Verrillo said. “The parts are tough. If the bike’s locked up, and they want a seat, then they’ll take the seat.”

However, Verrillo reiterated that, the majority of the time, the entire bike is stolen, and the cause is frequently improper locking or weak locks.

Verrillo also emphasized the importance of where the bike is locked. He cited a recent theft at a wood-frame house where the thieves broke a wooden porch spoke in order to steal the bike secured to it.

Ho offered his own security tips.

“The one thing you could do to ensure you don’t lose your bike is to get a U-lock and go through the frame of your rear tire and through your frame, then lock it to the rack,” Ho said. “That’s the safest method, because then the frame of the bike and wheel of the bike are locked together, and you’re not at risk of losing your frame, which is the most valuable part of the bike.”

Engraving a bike with a unique identifier, such as a driver’s license number or a symbol, is useful in reclaiming a bike in the event of a theft.

While the thefts continue, Public Safety is taking steps to prevent further thefts through Verrillo’s program.

“It’s a problem on all campuses, but we really need to impress upon people to use the U-locks, and if you see someone messing with a bike rack, give us a call,” Verrillo said. “Also, register your bike with Public Safety.”