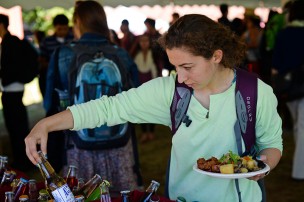 The University celebrated the local food movement on Tuesday, Sept. 23 with its tenth annual Eat Local Challenge, an outdoor eating event that exclusively features ingredients sourced within a 150-mile radius of campus. Spearheaded by Bon Appétit, the day honored the 15th anniversary of the company’s Farm to Fork program, which focuses on a commitment to purchasing at least 20 percent of ingredients from local vendors. (However, on the day of the Challenge, 100 percent of ingredients are required to be locally sourced, with salt as the only exception to this rule.) The event is part of a company-wide initiative promoting the importance of agricultural sustainability; this year, over 500 cafés across the nation sponsored the Challenge.

In an effort to express appreciation for its purveyors, Bon Appétit organized the Farm to Fork Competition, in which the food service company accepted grant applications from its local vendors in five national regions including the Pacific Northwest, Southwest, Midwest, Northeast, and Southeast. After evaluating each of the submissions, representatives selected five finalists from each area.

On the day of the Eat Local Challenge, event guests at all locations were encouraged to vote for their favorite vendors in their area. Among the five finalists of each region, two will be presented with a $5,000 grant to be put towards an agricultural project of their choosing that will serve to help the growth of their company. The winners will be announced within the next week.

“[Bon Appétit Co-Founder] Fedele Bauccio ponied up 40 grand across the United States in grant money for the small farmers, so we had 170 grant applications put in [nationwide],” said Wesleyan Executive Chef Brian Dagnall. “We had two of the finalists here yesterday, so they could win $5,000.”

The two finalists present during Wesleyan’s Eat Local Challenge were Urban Oaks Farm of New Britain, Conn. and We Bake We Jam of Durham, Conn., the latter owned by Wesleyan culinary employee Jeffrey Hill. If selected as winners, Urban Oaks will put the money towards a brand-new rototiller, while We Bake We Jam will put it towards the construction of a medium-sized greenhouse.

In addition to the participants of the Farm to Fork Competition, Tuesday’s Eat Local menu featured ingredients from suppliers such as Ronny Brook Farm of Ancramdale, N.Y., Horse Listener Farm of Ashord, Conn., Ipswich Shellfish of Ipswich, Mass., and even Wesleyan’s own Long Lane Farm, among several others. Entrees included clam chowder, wood-fired pizza, fried haddock, and roast pig with cilantro-peach compote; desserts consisted of strawberry and peach crisps.

“My favorite part [of the Eat Local Challenge] is just being able to deliver what we talk about as a company,” said Bon Appétit Resident District Manager Michael Strumpf. “It’s just a lot of fun, and it looks like the customers are having a good time and it looks like they’re really enjoying it…being outside and watching the cooks do action stations outside in front of the people…that’s what really gets me excited.”

Dagnall, who has been involved with the past four Eat Local Challenges on campus, agreed with Strumpf, saying that he has enjoyed watching the event improve during his time as a chef at Wesleyan.

“[The Challenge has] kind of evolved over the years,” Dagnall said. “We first started doing them indoors, and now it’s outdoors…we just bring a bunch of vendors in and have them talk to the students, so it’s involved, but it’s a cool thing. We look forward to it every year.”