Part of the Center for the Arts’ (CFA) ongoing Muslim Women Voices series, the Planet Hip-Hop concert capped off a day of freestyling, verse-writing, and spiritual workshops. 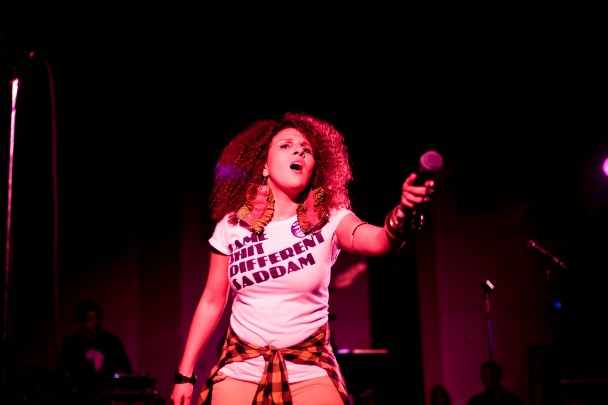 “Do you think I should end with this, like, weird, experimental jazz thing, or…”

The audience didn’t even let her finish.

“You’re at Wesleyan!” someone in the crowd shouted. “Always go weird!”

Maimouna Youssef (also known as D.C.-based singer-songwriter/emcee Mumu Fresh) obliged, sweetly singing a Choctaw lullaby over slowly unfolding keyboards and bass. And over that, as she is wont to do, Mumu Fresh rapped. It indeed was weird, but any other end to the concert would not have sufficed.

Those students, faculty, and scattered others who stayed in Beckham Hall until the very end were rewarded Saturday night with all the best Planet Hip-Hop had to offer. Part of the Center for the Arts’ ongoing Muslim Women’s Voices series, the Planet Hip-Hop concert capped off a day of freestyling, verse-writing, and spiritual workshops with an exhibition of the talents of its three central artists: Miss Undastood, Meryem Saci, and, of course, Mumu Fresh.

With a still-seated audience and the backing of a D.J., Queens emcee Miss Undastood (neé Tavasha Shannon, who way-back-when in 2003 was the first woman to take the title of rap battle champion at the Borough of Manhattan Community College) started off the night in an overtly religious vein. The only one of the three performers in a full hijab, Miss Undastood sounded more rap-ducational than hip-hop on songs like “Praying For You” and “Show Me How to Cover” (a pro-modesty re-write of “Teach Me How to Dougie”).

However, the entrance of Saci, along with a full band of keyboards, drums, bass, and guitar, heralded a more energetic turn. Born in Algeria, Saci fled to Montreal, Canada at age 13 to escape a civil war, joining the multicultural, multilingual hip-hop supergroup Nomadic Massive in 2005. (True fact: it’s illegal to live in Montreal and not participate in a supergroup.) Even by herself, about to put out her first solo record, Saci is a force to be reckoned with, bounding around stage spitting verses like, “Do the math, not your medium, not your average / Spicy African mix, Berber heritage.” Although she only guested on the original cut of that tune, “Average Type,” you wouldn’t know otherwise; Saci handled both the verses and the hooks with aplomb.

Her R&B side came out more readily in her solo single “Float,” a silky smooth soul tune propelled by a slinky bass line and Saci’s effortless upper registers. Saci and Youssef stepped up as singers more often than they did as rappers, every so often sprinkling spoken word and freestyle sections in their songs. I would be remiss if I didn’t mention Saci’s lingual hopping, like on “7araga” or “Curly Fro,” a tribute to her natural, chemical-free hair (and a better self-love anthem than Lady Gaga’s far inferior “Hair”) in which she jumped from English to French to Arabic and back in the length of a chorus. Or, as Saci might rap, “Burning bridges, burning borders, cutting corners, breaking orders.”

Of all the musicians on the stage Saturday night, Youssef was by far the most well established as a solo artist. Grammy-nominated as a guest on the Roots’ 2006 album Game Theory, Youssef is fresh off the release of her new mixtape, The Reinvention of Mumu Fresh. It’s a bold move to call yourself “a fresh blend between Nina Simone and Lauryn Hill,” as her website declares, but Youssef isn’t too far off. She pulled off “Black Magic Woman,” a true-to-form Mississippi electric blues jam, as handily as “We’re Already Royal,” a response to Lorde’s condemnation of conspicuous consumption, declaring poverty the reality: “Every day we hustling / Tryin’ fill that dinner plate / We don’t care/ The underdog don’t have no fear.”

Youssef gave the backing band a run for its money, deviating from the setlist and forcing the drummer to watch her signals, remixing her own arrangements as she went. Completely in command of her music, Youssef also exhibited absolute command over the too-sparse crowd, getting hands up in the air and trying to see if the audience could match her vocal aerobatics (we couldn’t). On that front, however, Saci just about matched, demanding complete attention for a call-and-response chorus that centered everyone’s attention right where it should have been.

Making the personal political and the political pop, Miss Undastood, Saci, and Youssef showed off not just their voices but also their experiences, influences, and beliefs. As women, as Muslims, and as hip-hop artists, they found ready and willing listeners at Wesleyan.

Nothing weird about that.