Two fire alarms ruined what could have been an energetic Saturday night. 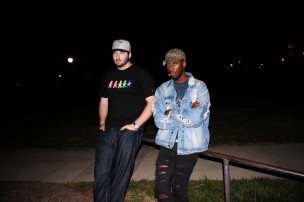 “This is a new experience, I’ve never done this before,” 21-year-old rapper GoldLink said, visibly tired yet still incredibly enthusiastic, as he sat in a room on the top floor of Psi U getting ready for his show that night. “I’ve never been in a room with a bunch of people my age. The crowd is always older than me.”

GoldLink was set to perform at Psi U at 11:45 p.m. on the night of Saturday, Sept. 20. At 12:20 a.m., he, along with the entire audience, was forced to evacuate the Psi U house before a single song could be performed.

For those unfamiliar, GoldLink is an up-and-coming rapper who works within a sub-genre that he calls “Future Bounce.” His music blends smooth, dream-like beats with a frantic and fast-paced rap style. He energetically cruises through themes of love and materialism, only to then explode with immense fury into verses on violence, death, and spirituality. His first album, God Complex, was released earlier this year and received tremendous praise from the likes of Pitchfork and Complex.com, the latter even ranking the album number 19 amongst its “Top 40 Albums of 2014 So Far.” He was showcased in this year’s SXSW and proceeded to sell out shows in New York’s Terminal 5 and Los Angeles’ Club Nokia. His gig at Wesleyan, however, was going to be his first show on a college campus.

The night’s beginning was promising, with a steady crowd streaming in as soon as the doors opened at around 10 p.m. The first hour and a half consisted of a warm-up set played by Abhimanyu Janamanchi ’17, who performs under the DJ name Indi. It was a rap- and R&B-heavy mix that managed to rile up the growing crowd into such a frenzy that people had to be actively cleared off the stage to make room for the opener. Student rapper Derrick Holman ’16, also known as Cornelius+, was ready to perform for a 30-minute set.

As Holman prepared to perform, Ismael Coleman ’15, the night’s M.C., introduced him to the audience. However, almost precisely as Holman took his first step on stage, a white light started flashing in the back corner of the room, which was then followed by the blaring of a fire alarm. The music was cut, and Coleman told the audience to exit the building in a single file line. By the time everyone was outside, two fire trucks had already shown up, as both the fire marshal and Public Safety officers entered the building to investigate. People stood around the entrance of Psi U, unsure what to make of the circumstances.

Across the street, GoldLink leaned against a railing, calm but obviously frustrated at the show’s interruption. Fortunately, around 15 minutes later at 11:45 p.m., a Psi U member announced that the show was back on, causing everyone to rapidly shuffle back inside.

Holman deserves a lot of credit for injecting some energy back into the crowd. In spite of the interruption and the decreased size of the audience, he strove to regain the momentum of the show, starting out by proclaiming, “Whoever pulled the fire alarm: Fuck that kid!”

Holman was stuck with a decreased set time but made it resoundingly clear that he was going to make the most of the mere 20 minutes he had on stage. He began by leading the audience through the lyrics of his first song, “Dae,” before jumping right into it with rabid energy. As he sped through his set, he refused to show any sign that the previous chaos had spooked him, constantly pacing, hopping, and swinging his arms around with infectious hyperactivity. He was also constantly pointing to members of the audience, shouting at them to turn up and even singing to one girl near the front of the stage. During this time, Psi U members frequently had to yell, “Get off the stage!” to clear out the overexcited audience members who had jumped up to join in.

When Holman’s set was finished and the stage was cleared, the audience was ready for the headliner. As Kidd Marvel, GoldLink’s DJ, came down to play an opening set, the crowd started to chant the rapper’s name. The organizer of the show, Ron Jacobs ’16, conveyed the crowd’s excitement to GoldLink.

“I go up to GoldLink’s room, I say ‘Hey, people are chanting your name,’” Jacobs said.  “So he comes down the stairs and he goes to me, ‘You better not be lying about this.’ I say, ‘No, I’m not,’ so he comes down and enters from the side. Then as he grabs the mic, boom— fire alarm goes off at the peak of the moment.”

Just like before, the audience evacuated the building to find a fire crew outside, only this time it was now lightly raining. As people exited the building, Psi U brothers announced that the show was over. The facilities manager had mandated that only residents would be allowed back into the building, and even Psi U members who didn’t live in the house were supposed to stay out. In short, the night was over.

In the wake of the incident, the question still remains: what caused the shutdown? Jacobs explained that no alarms were found in the downward position, discouraging the theory that they were pulled.

“We don’t know what the hell happened,” Jacobs said. “The fire marshal comes in and tells us that it was some kind of malfunction. It might have been the humidity; it was getting very steamy. I was opening windows myself because it was just so hot in there already, and you could see the fog and perspiration all along the windows.”

However, as Jacobs himself admits, this doesn’t explain the strange coincidence of the same alarm that went off twice, just as a musician was about to perform.

“I hope, if someone did pull the fire alarm, they ultimately hear this and realize what it takes to put this all together and realize that maybe, in the future, this is a little bigger than them,” said Mikah Feldman-Stein ’16, a sound technician for the show.

Looking back on the incident, however, Jacobs was surprisingly humble about the mistakes that had occurred on his end.

“Going forward, I do think that concerts need to be much more heavily organized, in a very clear way,” Jacobs said. “One thing that didn’t happen last night was event staff. There was no event staff, even though we’d specifically requested event staff. So we had Psi U brothers on call, making sure that the right number of people was coming in. Often, they weren’t doing their jobs right.”

When asked about how GoldLink responded to his show being cancelled, Jacobs replied, “The last thing he said was, ‘I just wish I could have sang. I wished I could have shown you guys my performance.’ He was bummed, but I think he understood. There’s not much you can do about that.”