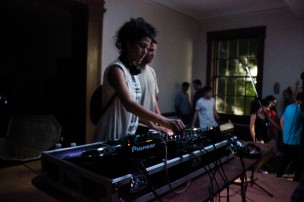 Saturday night’s show at Eclectic was an interesting spectacle: the performance of headliner Nguzunguzu (pronounced en-GOO-zoo-en-GOO-zoo) was beset with problems, although they were met by the organizers with an admirable tenacity. But it helped that the immense crowd present was already in such a good mood from the party atmosphere established by the opening acts.

The concert kicked off at 10 p.m. with a set by student DJ Calhoun Hickox ’15 under the name DOXA. His music was an interesting start to the show; it was much darker and techno-heavy than the rest of the night’s sounds. His music started out slow, building in tempo as time passed yet still retaining a haunting, almost discordant feel.

A performance by Jaime de Venecia ’15, also known as JDV+, followed DOXA. His work was far more energetic and fast-paced, lending itself well to the growing crowd that filled Eclectic. Unbeknownst to most of the audience members, however, a series of crises was unfolding behind the scenes.

The first major issue had occurred about a week earlier, causing a last minute rescheduling.

“Basically, they were trying to make a show in New York at 3 a.m.,” said Jacob Rosenbloom ’15, the show’s organizer. “Originally, I had them set to play from 12:30 to 2 a.m. I never said this was an early show; I had said this was something that would go until 2 a.m. and I expected to have them booked until 2 a.m.”

Rosenbloom navigated around the issue by having Nguzunguzu stay on until 1:15 a.m., with Saarim Zaman ’16 playing a set for the remainder of the show. Just hours before the start time, however, another crisis emerged.

“I was supposed to pick up the artists of Nguzunguzu at 6 p.m., but by the time I got to the airport, their manager texted me saying that they had missed the plane,” Rosenbloom said.

After leaving the airport without the group he was supposed to meet, Rosenbloom then received another text from Nguzunguzu’s manager, telling him that duo’s luggage was on the plane and waiting at Hartford Airport. By this time, however, Rosenbloom was already back on campus. Ultimately, the group managed to catch a train to New Haven and make it to campus around 10:40 p.m. They started playing just 10 minutes later than originally intended, at 10:50 p.m.

Nguzunguzu played a diverse mix. Almost every song had a strange double layer to it. At the forefront were the songs they were mixing, mostly consisting of fast-paced hip-hop and R&B samples, even incorporating a little Rihanna at one point. However, these were all accompanied by some of Nguzunguzu’s own produced work: synth-heavy, slow-paced beats that gave the songs a dreamlike feel. It was this blending of a fast-paced overlay with a much moodier background that made the music so unique.

At 11:50 p.m., the ballroom suddenly lost all power, much to the confusion of both the audience and the two musicians on stage. As it turned out, the electricity to the ballroom had been deliberately cut; somebody most likely flipped the fuse in the building’s basement. Rosenbloom suggested that competing parties, jealous of the show’s large audience, might have been to blame. At any rate, the power was switched back on after just a few minutes, but it was too late to save the evening. Rather than play for another half hour, Nguzunguzu decided to call it quits.

“I was like, ‘Well you signed up for a 90-minute set,’ but they were a little pushy,” Rosenbloom said. “I didn’t want to aggravate them too much because I really did like what they had done. I realized that it was pretty out of their comfort zone; they’d had a pretty stressful day, losing their baggage and missing their flight. So I cut them some slack. I was like, ‘Fine, you ended up playing an hour long set. Zaman could play an hour and fifteen at the end.’”

Zaman DJed a loud and frantic set of remixes, managing to regain some of the momentum lost in the chaos. By this point, however, the ballroom had unfortunately cleared out.

Yet looking back, it would definitely be unfair to say that this series of obstacles stopped it from being an enjoyable night. Throughout the concert, audience members were letting themselves go, even jumping on the stage and dancing with the performers. DOXA and JDV+ deserve a lot of credit for playing excellent sets in the face of the looming issues.

And, despite the crises, Rosenbloom still felt positively about how the show went.

“Last year I planned a show in the WestCo basement, and I thought it was a great show, everyone who came thought it was a great show, but the problem was there were only 10 people who came,” Rosenbloom said. “This time it was the complete opposite, and I had a good time. Seeing 400 people excited for something I organized really means a lot to me.”