Subtle Changes on the Wesleyan Campus

Small changes cropped up all over campus this summer. Can you spot the difference? 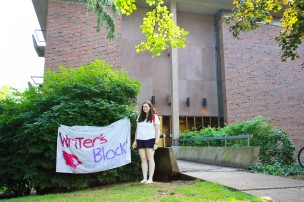 When you arrived back on campus, things probably looked exactly like they did when you left them (save for a lack of red Solo cups and beer cans littered about). However, in the past couple of months, Wesleyan has undergone a couple of low-profile but significant transformations that you probably didn’t notice at first glance. What follows is a roundup of subtle but stellar changes on campus; be on the lookout.

All-gender bathrooms: In response to the trans* activism from Fall 2013, new all-gender bathrooms have been added across campus. There are new locations in many buildings, including Olin, Exley, 41 Wyllys, Usdan, and North College. In addition to single-use bathroom in Usdan that had already been in place, four new all-gender bathrooms are now located in the basement near the mailroom. In Exley, the two formerly gendered bathrooms near Woodhead Lounge are now open to all.

Summerfields menu: After the poor reception to last year’s pho, Summerfields has ventured further into the hit-or-miss world of international cuisine with its new Mediterranean-inspired menu. This semester, Summies is offering an assortment of Middle Eastern meal options, prominently featuring falafel as well as chicken and beef kebabs. Among the new dishes are the Falafel Platter, a dish not dissimilar from WesWings’ Mediterranean Platter, and the Kebab Sandwich, served on pita bread with a side of french fries. Last year’s Root Vegetable Salad seems to have been nixed from the menu and replaced with tabbouleh salad, and another new additions to the menu is a cobb salad that includes feta cheese, roasted peppers, and artichoke hearts. More urgently, Summerfields pho is resting in watery, flavorless peace.

Weshop layout: Students returning to campus will be happy to notice that Weshop shopping has transformed into a less claustrophobic experience. The line to pay no longer snakes down an aisle full of canned goods, but rather exists more naturally in an open space in the middle of the store. This change, which should be appreciated by many, means that Weshop patrons will no longer have to crawl on their hands and knees to get rice, while dodging baskets full of food swinging near their heads. This open space happens to sit next to the refrigerator with prepared food and drinks, so you can readily impulse-buy your kombucha right before paying.

Peach tree: The flourishing garden located by WestCo, started by WILD Wes, now contains a peach tree. While the tree’s fruit is not forbidden per se, the peaches aren’t exactly readily available. Currently, the tree offers only a single, albeit lovely-looking, peach. Grab it before those pesky squirrels get there first!
Writer’s Block/Recess House: The residences formerly known as Writing Hall and Writing House have combined literary forces to form Writer’s Block, a dorm expressly for Wesleyan’s wordsmiths at 156 High Street (above WesWings). The former Writing Hall, an all-freshman hall on the fourth floor of Clark, now serves as standard first-year housing. The first floor of 202 Washington Street, previously a program house for writers in their sophomore and junior years, now serves as Recess House. Contrary to campus rumors, Recess House is not a program house for the kickball-loving and monkey bar-swinging among us. Rather, the dorm, geared toward international students, will remain open during breaks.

Art House/Music House: Music House, a program house previously located at 316 Washington Street, has moved down the block to shack up with Art House at 230 Washington Street. The creative juices will most certainly be a’flowing at Wesleyan’s newest artistic hub. Lighthouse, the Christian program house that previously shared a residence with Art House, has relocated to 210 Cross Street. There, its residents should expect to enjoy a peaceful vibe appropriate to their program house’s mission.

Preferred Name: On Monday, Sept. 1, students received an email announcing that a “preferred name” option is now available under “Student Profile” in students’ e-portfolios. In their email, University Registrar Anna van der Burg and Dean Mike Whaley said, “This option has been developed to respond to the needs of some international students, transgender people, and others who prefer to use a middle name or a nickname.” Preferred names will appear on internal documentation, such as the directory, Moodle, and WesCards upon request. Legal names will continue to be used in official and external documentation, such as transcripts and billing documents. While students may change their preferred name as desired, the University may remove names deemed inappropriate. So, sadly, your professors will probably not be announcing “Giant Joint” when taking attendance.