Students Pose for Photos for Project “Not Asking For It” 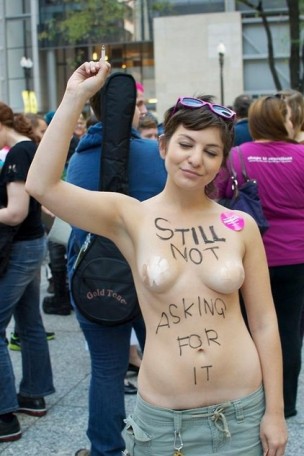 Project “Not Asking For It” launched on Sunday, April 20 and Monday, April 21. The project’s intention is to spread awareness that, no matter their clothes, gender, or level of inebriation, no one is ever asking to be sexually assaulted.

University students were provided with the opportunity to have either a picture or a dance video taken of them, wearing anything they chose, in an attempt to show that they are not asking for “it.” The organizers of the project emphasized that “it” refers to unwanted commentary, name-calling, touching, harassment, assault, rape, or anything that makes the victim feel uncomfortable.

SlutWalks that occurred in 2011 in Toronto, Ontario helped the students come up with the idea. In a SlutWalk, activists protest against the idea that what women wear, how much they drink, or how they behave can make them viable targets for rape. These walks have become one of the most visible feminist action movements over the past 20 years.

“I was inspired a lot from the SlutWalks where a lot of people got together in response to comments made and the lawsuits that were settled,” Rappaport said. “Perpetrators were let off because they used excuses like ‘she was wearing short shorts so I could do this.’ When I first saw the pictures [from the SlutWalks] on Facebook, I was inspired.”

Rappaport also noted that during the SlutWalks, protesters were stressing that sexual assault does not only happen to people who are dressed scandalously. Houstoun added that she was encouraged to assist in organizing Project “Not Asking For It” after attending the Wesleyan Student Assembly (WSA) meetings regarding sexual assault.

“A lot of people at the WSA meetings say that the culture at Wesleyan needs to change,” Houstoun said. “[Project ‘Not Asking For It’] is one way to tangibly make a statement.”

Coordinators of the project believe that, with the recent controversies surrounding sexual assault on campus, it is an important time to begin the project.

“I thought it would be a really cool thing to say in response to everything going on,” Rappaport said. “In these talks at the WSA meetings, it has turned into people targeting people or people thinking that people are targeting people. This [project] is a way to bring everyone together. You can’t argue that this is ostracizing a certain individual or a group; it’s just people posing for a picture.”

Rappaport added that she has many friends that have been victims of sexual assault and she thinks the idea that perpetrators can use excuses, such as “she was wearing a bikini” or “she was dancing like that,” is wrong.

“It makes me so sad when victims blame themselves,” Rappaport said. “Victim-blaming needs to stop, and I thought this would be one way to make sure that people who have been the victim don’t feel that they deserved this.”

Harrington expressed her feelings regarding the excuses that perpetrators use.

“I feel like I hear more about people blaming the victim,” Harrington said. “It needs to stop because it is ridiculous.”

As for future plans surrounding this topic, the organizers intend to post the pictures and videos on Facebook to spread their message. The main objective is for the movement to expand to other college campuses.

“A lot of people have expressed interest [in this project],” Rappaport said. “I want people to take a second to show that they are a normal person doing normal things. Based on how this goes we will decide what things we want to do in the future. It would be cool to see what we can present on Facebook. This is a project that pervades all cultures.”

Thomas added that he hopes the results of this project will enlighten future conversations.

“I hope this sets a tone in discussions and changing the culture in simple ways,” he said.

The organizers all agreed that, in a time when the topic of sexual assault is a hot-button issue on campus, this is a different approach to looking at it.

“This is one factor of the whole idea of sexual assault,” Houstoun said. “It is…a different perspective. It should spur different ways to resolve the issue without offending either party.”

Rappaport discussed what she believed are the benefits of this perspective.

“The conversation that happens on campus is all about assault, but I think that ‘it’ means commentary that is unwanted and unnecessary,” Rappaport said. “I think that this is responding to that part of it, too. Not just that this person made me do this sexual act with him, but it’s like all the commentary that comes with it, such as getting looked at funny…getting cat-called, those are the things that I consider harmful and part of the culture.”