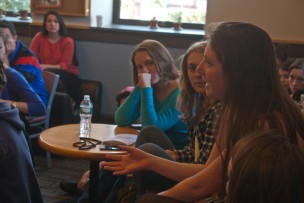 During the first two days of WesFest, Wednesday, April 16 and Thursday, April 17, several groups of students collaborated to educate prospective students (prefrosh) about issues surrounding sexual violence and gendered bathrooms on campus. These students took various actions, including creating a zine called “Trigger Warning,” holding peaceful demonstrations outside of prefrosh events, and holding an information session with prefrosh called “Identifying as a Woman at Wesleyan.”

The latter event was held on Thursday from 4-6 p.m., and organizers stated that its purpose was to raise awareness among future University students about pressing issues on campus. About 40 students, professors, parents, and prefrosh attended the event. Four Alpha Epsilon Pi members were in attendance, one of whom stated that he and his fraternity brothers were there to listen to the concerns of current and future students.

In the midst of a campus-wide debate about sexual assault at the University, Alicia Gansley ’15, one of the organizers of the event, described it as a laid-back get together and discussion.

“A lot of people can get burnt out on activism, so we wanted to bring something positive to the campus that would be a fun and relaxed event for women and other people to get together to talk about these issues and about fun things in an informal setting,” Gansley said. “We want to bring a positive feminist vibe to campus, and we hope it’s one of many such events to come.”

Topics covered in the event included being a woman in a male-dominated academic field; finding sexual assault resources on campus; staying safe during the weekends; women in the music scene at the University; women in sports; and feminist activism on campus.

Gansley described the logic behind holding the event during WesFest.

“We chose to do it during WesFest specifically,” Gansley said. “We would love to give [prefrosh] an accurate idea of what it means to be a woman at Wesleyan and answer questions that they might not feel comfortable asking in a more mixed environment.”

Attendee Brenda Quintana ’18 explained her interest in the event.

“I haven’t had the chance to visit before, but I know this is a good opportunity to meet people and see Wesleyan at its best,” Quintana said. “I personally identify as a feminist, so any issues regarding women on campus really interest me, and I think it’s important to further awareness in these issues. This was definitely a panel that interested me, and I’m open to hearing whatever conversations are brought up.”

Gansley stressed that the event was not organized to stir up further debate or controversy on campus, but rather to facilitate an open conversation among prefrosh and current students.

“I don’t want this to be a highly politicized event,” Gansley said. “I would never shut down a discussion of what is going on with the sexual assault activism as it relates to fraternities on campus, but I’m not going to try to direct the conversation that way.”

Another group of students compiled “Trigger Warning,” a 23-page zine that was scattered around campus on Wednesday. The zine includes creative works from students and anonymous authors; it comprised a collection of drawings, poems, and prose about participants’ experiences with sex, sexual violence, and relationships. Contributions were both fiction and non-fiction.

Student activists also gathered outside of the Office of Admission and the Usdan University Center on Wednesday and Thursday, holding signs with slogans reading “Fuck Macho Bullshit” and “Gendered Bathrooms Are Violent.” The students talked to interested parents and prefrosh about issues of sexual violence and gendered bathrooms on campus.

Yael Horowitz ’17, a student who participated in the peaceful demonstration on Wednesday, described the protest.

“I sat outside a student-to-student forum [on Wednesday],” wrote Horowitz in an email to The Argus. “I was sitting there to…invite them to [the] event on Thursday, an informal forum about identifying as a Woman at Wesleyan, and…to hand out questions that they could think about or ask at the [admissions-run] forum to really start these conversations.”

Olivia May ’14, present at the Thursday protest, described her motivation for holding a peaceful protest rather than a disruptive one.

“I think generally the administration pays more attention to these types of events than the events that only [involve] current students,” May said. “We might have better visibility for peaceful protests in this context.”

Prospective parents and students had a range of reactions to the signs. Anya Morgan ’14 described some of their interactions.

“We had two moms come up to us, and one of them was very in favor of all-gender bathrooms, so it was really cool to talk to her,” Morgan said. “We’ve gotten a lot of glances and sort of horrified looks, as well as some handshakes.”

Morgan added that the choice to hold a peaceful protest was in part a response to recent University sanctioning of more extreme protestors.

“Since the University has been harsh in punishing activists and hasn’t been in support of activism recently, this is a self-preservation thing,” Morgan said. “I would’ve liked to do something more radical, but I think that the University, right now, is not on our side.”

Overall, the actions taken by current students during Wesfest were aimed to foster discussion in the prefrosh community and to give soon-to-be students a forum in which they could ask any questions they might have.

“We are hoping to educate in a sustainable and effective way,” Horowitz wrote. “It’s important that prefrosh hear our voices, and…[for] them to know that there are ways to make their voices heard.”