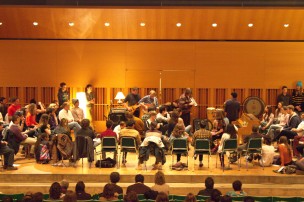 As soon as I entered the hall, I was immediately struck by the strange layout of the set. Chairs were set up in a series of concentric circles on the stage, bringing audience members next to the musicians who were patiently holding their instruments. The confusion was somewhat placated by an explanation on the program, inviting the audience to sit wherever they would like, and allowing them to freely move around during the performance. However, it was then heightened with the explanation of the different pieces, each of which represented a stage of time. The score was symbolized with a diagram of patterns occurring in a series of circles, along with a strange graph depicting multiple flowing patterns.  On Sunday, I sat down on Foss with Mowrey to enjoy the beautiful spring day and discuss the ideas and execution of this fascinating piece of experimental music.

The Argus: First off, I wanted to ask about the ideas behind this show.

Tennessee Mowrey: It was an East Asian Studies and Music double thesis, and I was looking at this guy, Dogen. He was born in 1200 and he founded the most prominent Zen sect in Japan. He wrote a very long work, throughout a long portion of his life, and in it he introduces an idea of time that’s not linear, that there’s only the present moment. The past is created in the mind, in the form of memory, and the future is created in the mind in the projection of memory and your present experience. But basically all that there is is your current experience in the now.

A: So what about the score that you included that was displayed on the program and in the posters for the show? How exactly did that work?

TM: It’s broken up into rhythmic wheels and pitch parameters. For the rhythmic wheels, how you read them in the spokes are even divisions of time, and you can read it either clockwise or counterclockwise, at whatever division of time that you want, in one ring, and you play the strikes in that ring. So it’s very easy to play rhythms half as fast or twice as fast, but also with other weird phasing patterns, like in triplets of things that are slightly off from the normal straight pattern but will phase back in.

A: So then how did all the different musicians you incorporated follow this code?

A: So if the score was so open to interpretation, how much of the show was based around improvisation?

TM: Almost everything. It was supposed to be the creation of a mutable, sonic-area space where there was a consistency and a pattern that was organic. And I’m sure you noticed, you were there in the space and everything was sort of organic and living and breathing together. And I felt that if I had to prescribe all the choices that my musicians were making in that moment, then I would deprive my musicians of that.

A: Now, your piece was divided into four sections: “Past,” “Present,” “Future,” and “Experience.” Listening to the show, I noticed steady developments of the piece in terms of rhythm and speed, but there weren’t any points where it explicitly changed from one phase to the next. Was I just not listening hard enough, or was that the point?

TM: That’s exactly what I wanted. The past transitions seamlessly into the present; there’s no hard break in time. So what happened was, everyone was playing past for a while…and then one person starts playing present. So one person starts playing in an eight-spoke cycle, and other people are still playing in a seven-spoke cycle, so it starts to phase and fall out of phase with itself. Other people were joining playing in eight, so less were playing in seven. It just gradually shifted so that the eight was the graduate force and the seven sounded like things beating against eight, versus the eight beating against the seven. And then, because the future is created in the mind as a projection of the past and the present, the future is played with these two scores. At some point, after we’d been playing present for, like, 10 minutes, someone started playing at seven again. If you’re one of the first people playing seven again, you’re supposed to make it kind of noticeable, so people can go “O.K., now we’re extrapolating from the past and the present,” or at least the musicians would know that now the past is open for playing as well. When it’s going from “Past” into “Present,” it’s meant to be two things happening simultaneously that are locked together, but by the time you get to “Future,” you’re not supposed to be playing pulse space that’s there, and these motifs that are appearing have established themselves throughout the first piece.

A: O.K., so then where does the fourth piece, “Experience,” come into play?

TM: I said some intentionally inaudible things; I hope you heard the words “past,” “present,” and “future,” and I hope that you heard the word “stop.” We all stopped at “stop,” and that was the only hard transition in the entire piece, then the score to “Experience” is four lines of text: “Find a friend. Don’t let a flower be a flower amongst a bed of flowers. Let its color alone dazzle you both. Repeat until finished.” You know, I just wanted people to have this connection of the music being given to them…not just as a performance but as a moment of connection between two people. I was a little bit scared to put a long experimental work as my senior thesis. I could have written it out, I could have taken these things that I had and given them to my musicians, but I didn’t want to be that kind of dictator. I wanted the people to be able to express themselves in a way that would be consistent through time, but also new and consistent each time.

A: Working with such a dynamic, yet also unpredictable, piece, were you at all nervous that it could develop in the wrong kind of way, or that something would go wrong in the communication between musicians?

TM: Oh yeah, I mean, I was terrified even three minutes into the performance. Because it starts slow, it starts to emerge, and then it’s fully grown and you’re there and you’re in it, but it takes a couple of moments to get into that space. The musicians are all very prolific performers; we definitely have hundreds, if not thousands, of hours of performance between them, so I definitely knew we were going to feed off that energy.

A: So one element that really stood out during the show was the incorporation of space. If you were sitting on the stage, it felt like the sound was literally enveloping you. How integral was this to the show?

TM: I wanted to create a space of you being home, and comfortable, and being ready to experience and welcome whatever’s going to be there. As opposed to the harsh lights coming down and “O.K., I’m watching.” The stage was meant to represent the score, the placement of the aisles was along the same axis, and there were the circles and the inner-circles. This is also paying tribute to the famous Buddhist image of the dharma wheel. But mostly I wanted intimacy.