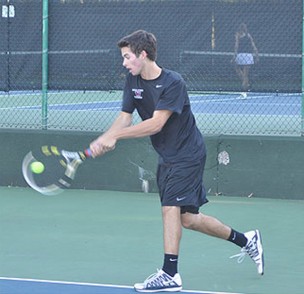 The men’s team had its racquets firing with full force to start off the 2014 spring campaign. Wesleyan kicked off its bid for a successful season by shutting out Hamilton at home 9-0.

“I think the team did a very good job of maintaining the intensity of [its] training, both on and off the court, as well as over the winter,” wrote Head Coach Mike Fried in an e-mail to The Argus. “As such, our fitness level is right where it should be, and there was very little rust to shake off when we began our season with Hamilton and the matches in Florida.”

The Cardinals failed to drop a set in any match against Hamilton and only lost 16 games throughout the event. Jake Roberts ’17 led the way for the Redbirds at first singles, winning comfortably, 6-1, 6-2. Captain Stephen Monk ’15 won his match at fourth singles with the same score as Roberts. Roberts would be victorious on the court again with an 8-1 doubles decision, this time teaming up with another captain, Sam Rudovsky ’16.

“It’s certainly nice to start the NESCAC season with that kind of win, and it’s particularly gratifying when the production is coming from every one and every spot in the lineup,” Fried said.

Following the conference victory, the team traded the indoor courts in the frigid northeast for outdoor tennis in shorts down in sunny Florida. The team used the trip to help prepare for the brutal conference schedule, as well as refine some skills.

Wesleyan went 4-1 during a five-match span down south. The team started the trip off with a tight 5-4 win over Wingate, who is ranked 42nd nationally in Division II. Roberts, Michael Liu ’17, and Michael King ’16 all came up big for the Cardinals against the Bulldogs, each securing three-set wins. At first singles, Roberts took the super tiebreaker 10-8 after dropping the second set 4-6. Liu and King each won the second set as well as the super tiebreaker after falling short in the first set. Liu took care of business in the super tiebreaker with a 13-11 triumph at second singles while King had a little less trouble at fifth singles, winning 10-5.  At sixth singles, Zacko Brint ’16 chipped in with an important win in straight sets, 6-4, 6-2. The fifth and final decisive win for the Cardinals came at third doubles, where Roberts and Rudovsky scored an 8-2 victory.

Franklin and Marshall was the next roadblock for the Cardinals,

but much to their delight, the Diplomats were not much of a challenge. Wesleyan won in an 8-1 decision with all six singles players winning, including straight set victories from five out of the six. Roberts had to go to a deciding super tiebreaker, which he won 11-9. King and Liu, along with Roberts and Rudovsky, each won 8-1 in their matches at second and third doubles, respectively.

Division I Creighton handed Wesleyan its first and only loss of the trip, beating the Cards 4-3. This was an improvement from last year, when Creighton won 5-2. The match was out of seven points because Division I scoring rules were in play. The Cardinals picked up two points off wins from Liu at second singles by a score of 6-1, 6-2 and from Monk at fourth singles, by a tally of 6-2, 6-4. The team earned its last point by winning two out of three of the doubles matches. Brint and Greg Lyon ’17 were victorious at first doubles, winning 8-3, while Roberts and Rudovsky took care of business at third dobules with an 8-5 result.

The Redbirds bounced back the next day with a 5-4 win over Aquinas College, ranked 10th nationally in the National Association of Intercollegiate Athletics. Lui and Monk won in straight sets while Roberts and King pulled out three-set thrillers, winning the final set 6-4 and 7-5, respectively.

The team closed out its play in Florida with a 6-3 triumph over Palm Beach Atlantic. Liu finished his undefeated trip with a three set victory at second singles. He captured his fifth win of the week with a 7-5 result in the last set. Roberts, Monk, King, and Brint each won their singles matches in straight sets. At third doubles, Roberts and Rudovsky were the only pair to be victorious for the Cardinals, winning 8-4. The two went undefeated, winning all five of their matches during their time in Florida.

“We clearly have an extremely young team, but everyone has really come together, and I look at our youth as very much of a positive,” Fried wrote. “We had some absolute battles in Florida against some great teams. Hopefully that kind of preparation will pay off in our upcoming NESCAC battles.”

The team will jump back into conference play this weekend against Conn College on Saturday, March 29. They will follow this with a match against Tufts on Sunday, March 30.

“I’m excited to see how we compete against some of the best teams in the country over the next five weeks,” Fried wrote. “I try not to have expectations going in individual matches or the season. Our goal is to play to our potential; if we do that I feel good about the results following.”