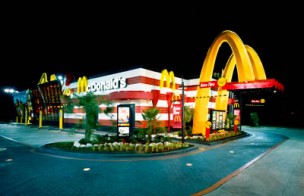 What does the average American expect of a fast-food establishment? Perhaps it is the comfort of consistency at bargain prices, the ease of access coupled with optimum efficiency, or some combination of the two. Despite overwhelming evidence regarding the health risks of fast-food consumption, Americans are showing no signs of kicking the habit. In fact, a 2013 Gallup poll concluded that 8 out of 10 Americans eat fast food at least once per month.

Quick-service food is deeply ingrained in the culture of our nation, but it is likely that even the most dedicated fast-food fanatics are unfamiliar with the economic principles that allow their favorite joints to prosper. Over the past few months, employee strikes have broken out nationwide in an attempt to raise the federal minimum wage for fast-food workers from $7.25 an hour to $15 an hour. Because this increase in pay would more than double the income of the laborer, fast-food companies would certainly feel the financial effects of such a dramatic budgetary change.

Though the current debate described in this way may appear irrelevant to consumers, that supposition couldn’t be further from the truth.

“Fast food is a very interesting case because it has a lot of minimum-wage workers, and minimum-wage workers also tend to eat a lot of fast food,” said Andrews Professor of Economics Joyce Jacobsen. “They’re suppliers, but they’re also customers. So, it could lead to this perverse case where it is true you’re earning more, but it could actually drive up the cost of fast food.”

A raise in the minimum wage could mean not only higher prices for consumers, but also increased unemployment rates in the industry, which might cause the employees’ fight for a higher salary to backfire.

“The basic theoretical argument in economics has generally been that when you raise the wage, some people will lose their jobs,” Jacobsen said. “The other question is on the income side, which is that even if you get some people losing their jobs because of [increased wages], would it be better for the people who keep their jobs because they will have higher income now?”

Another layer of complexity is added when one considers quality of life in the workplace. It is likely true that an employee who receives higher pay will be a happier worker and will thus provide better customer service. Nevertheless, this may not be the most important issue from the perspective of a fast-food employer, who might argue that most patrons of the fast-food industry are primarily concerned with convenience as opposed to customer service.

With all of these arguments to consider and many more to unfold, it is no surprise that the national debate is still in progress. Though efforts to effect change persist, Jacobsen stressed the importance of economic farsightedness in the context of the whole market. She explained that this might be accomplished through refundable tax credits intended for lower income families, so that employees would be able to maximize their earnings without significant side effects for the general economy.

“I would prefer to see the price of labor to businesses be kept lower to encourage job creation, and [instead] transfer income to workers through the earned income tax credit,” Jacobsen said. “I just feel like trying to keep the price of labor down to businesses while doing the income transfer on the other side is a better solution because it doesn’t affect the work incentives, but it does give you more income.”

The laws of economics suggest that there is no quick-fix solution to the problem at hand. Instead, gradual changes will have to be made over a long period of time in an effort to safeguard the well-being of businesses, employees, and consumers, as well as the economy at large. With Obama in support of a less extreme increase in the federal minimum wage, which would raise current pay from $7.25 an hour to $10.10 an hour, the government is doing its best to take the middle ground in its attempt to achieve long-term national and individual economic prosperity.