So Far, So(chi) Good at the Olympics 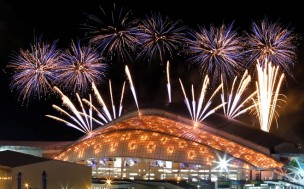 In an Olympic Games filled with political scandal and controversy over preparation methods, the world has still managed to rally around athletes and their stories. Rather than glorify past studs and multiple-time gold-medalists, however, Sochi has centered around uncertainty.

Two American fan favorites, half-pipe snowboarder Shaun White and long-track speed skater Shani Davis, failed in their quests to three-peat as Olympic champions, and a fall in her semifinal run of snowboard cross kept fan favorite Lindsey Jacobellis from qualifying for the finals. These losses come as harsh reminders for the U.S. of the growing might of rival nations’ winter sports programs.

What supporters should take away from Sochi is not disappointment from certain failures, but rather a passing of the torch. Kelly Clark has dominated the women’s half-pipe for the last decade, but there is more to a great story than just the perennial favorite. Just last week no one outside of the U.S. Olympic snowboard team and diehard snowboard fans knew anything about 24-year-old Kaitlyn Farrington. Kaitlyn not only made the finals, but went on to win the entire competition.

In men’s slopestyle, an event that many anticipated Canada to dominate, American Sage Kotsenburg found himself atop the podium in a thrilling upset. Before his first run, he decided to try a backside 1620 Japan, a trick that he had never done before in competition. Try doing four-and-a-half rotations while having your feet locked into a snowboard: it’s not easy.

Iouri Podladtchikov, a Swiss snowboarder also known as “iPod,” finally overcame many years of trailing Shaun White in both the X Games and previous Olympics. Indeed, at the X Games just two weeks prior to the Olympics, iPod crashed three times while trying to land his new trick, the YOLO Flip. Podladtchikov found his clutch gene and finally finished the trick in competition for the first time en route to his first gold medal.

Four years ago, Alex Deibold was in Vancouver for the Olympics, but he wasn’t competing. He was a wax technician, hoping to one day get his shot on the Olympic stage. Four years later, Deibold didn’t want to be sitting on the sidelines this time around, and his wish came to fruition as he surged late in the race to a bronze medal in snowboard cross.

Inspirational stories like Deibold’s give hope to aspiring athletes across the globe.
Most Americans only care about hockey for two weeks out of every four years, especially if they live in a warm-weather state. These viewers may know the veterans on the Olympic team, such as Patrick Kane and Zach Parise, but these same spectators probably didn’t know T.J. Oshie before the Olympics, who, much to the dismay of the Russians, has adopted the now widely popularized moniker “T.J. Sochi.” Due to international rules, Oshie was able to shoot six times against the Russians in the deciding sudden-death shootout, and was able to convert four of his six opportunities into goals. His performance led to a victory over the demoralized Russians and a second seed for the Americans in the 12-team bracket. Russian demonstrators gathered near the U.S. Embassy in Moscow on Monday to protest a disallowed goal that would have given the host country a 3-2 lead late in the third period.

The Americans and Canadians have both won their quarterfinal matchups and are headed toward another epic Olympic showdown in the semifinals. The Americans will be heavy underdogs, but that was also the case four years ago in Vancouver when they took the Canadians to overtime before losing on a goal by Sydney Crosby. On the other side of the bracket, there is a battle for Scandinavia as Finland squares off against favorite Sweden.

The New York Islanders are perhaps the biggest losers after Sochi is all said and done. Their star player and face of the franchise, John Tavares, who is part of Team Canada, will have to miss the rest of the NHL season and probably undergo surgery to repair a torn medial collateral ligament and a torn meniscus in his left knee.

For the second straight Olympics, the American and Canadian women’s hockey teams have reached the gold-medal game. The United States wants to avenge prior losses, including a 3-2 defeat earlier in the tournament and a silver medal from four years ago, when the Canadians beat the Americans 2-0. Unfortunately for the red, white, and blue, they came up short on their quest for gold. They were up 2-0 with just under five minutes left in the third period when Canada fired back with two goals, including the equalizer with just 55 seconds remaining. In overtime, Marie-Philip Poulin proved to be the Canadian hero, scoring on a power play after eight minutes of play. The Canadians have now won four straight Olympic gold medals, and their last loss dates back to 1998 against the U.S. in Nagano.

Figure skating is an event often dominated by the Russians and, so far in these Olympics, this is holding true. At just 15 years of age, Yulia Lipnitskaya helped her country bring home a gold in the new event of team figure skating with two enthralling performances on the ice. Meanwhile, Meryl Davis and Charlie White gave the U.S. its first figure skating gold in this Olympics with a daring performance in the ice dance competition and Gracie Gold put forth an acceptable effort at “Gold for Gold” in the women’s short program. The 18-year-old sat in fourth place halfway through the competition and ended up finishing in that same spot, just missing a medal. Adelina Sotnikova of Russia took home the gold despite being considered by most as a dark horse.

One of the great things about the 2014 Olympics is that no one knows what’s coming next or who’s going to make a surprising rise to stardom. We will just have to keep tuning in to find out.