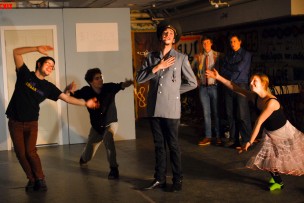 One may theorize as much as one likes about the bizarre creation that is “KGB Presents: The 24-Hour ‘Let’s “Beak” Canary Cancer!’ Benefit Concert & Variety Show Telethon: Hour 24.” However, there is no doubt that it is set to be one of the more interesting plays of the semester.

Conceived by Solomon Billinkoff ’14, a theater and film double major, and Russell Goldman ’17, a prospective film major, “KGB,” as the highly elaborate title somewhat explains, is a play about a telethon that aims to fight the horrendous epidemic that is “canary cancer.”

“We were inspired by the title of the movie ‘Fargo,’” Billinkoff explained.

Both Billinkoff and Goldman worked extensively together last semester on the improv masterpiece that was “Welcome To The Troll Cave;” before long, they found themselves once again working together on the hilarious “Avenue Q.” Eventually, Billinkoff approached Goldman with his idea for “KGB”.

“He said, ‘I wanna write a show about a telethon, do you want to be creatively involved?’” Goldman said. “I loved the work [he] did in Lunchbox and Troll Cave, so I said, ‘Absolutely.’”

Though not rushed, “KGB” was created much faster than either of them expected due to their excitement for the play. The very night Billinkoff brought it up, the two of them spent over three hours in Espwesso coming up with a basic concept for the show. They would then spend around a week during winter break rapidly laying down the groundwork for the production and finishing almost all of the writing.

The concept of “KGB” is, for the most part, straightforward. The play depicts the last hour in a telethon that aims to end canary cancer, a fatal disease that induces vomit.

“It wreaks havoc on 127 species of birds,” Goldman said. “Like crows, for example.”

This last hour finds the hosts of the telethon, played by Will Stewart ’17 and Peetie McCook ’16, struggling to make their original end goal of $15 million, because they have only made $198.65 so far. Due to this dilemma, they get a bit desperate and begin performing musical numbers that are somewhat unorthodox.

“We are trying to hit all the major areas that are covered in art today, which are pandas, candy, cauliflowers, and refrigerators,” Billinkoff stated.

However, it must be noted that “KGB” is not intended to be a musical. As it is not exactly founded nor based on musical numbers, the play is one that is both inspired and empowered by musical theater but is ultimately not an adherent to the genre and the traditions it often entails.

“The music is only really present in the acts,” Goldman explained. “It’s not like characters are breaking out into song like a regular musical. It’s all within the context of the benefit concert.”

One of the more peculiar plays to appear on the Wesleyan stage this entire year, “KGB” does not look at all like a show to be ignored. With a stellar comic ensemble and dynamic directing duo, this is clearly a must-see for anyone who remotely appreciates the comic scene at Wesleyan.