“They Extract!” Brings Complex Themes of Commodification and Emotion to ’92 Theater

Theater at Wesleyan is no stranger to allegorical pieces that bizarrely resonate with profound truths in our lives. Though occasionally a tricky performance to follow and understand, “They Extract!” ultimately performs this truth brilliantly. It is a fantastically strange play that strikes a powerful balance between formal experimentation and thematic clarity.

“They Extract!” was written and directed by Alma Sanchez-Eppler ’14. A theater major who has had extensive experience with the theater scene at Wesleyan in both faculty and Second Stage productions, Sanchez-Eppler crafted “They Extract!” as her senior capstone piece. She chose to do so through Second Stage, as opposed to the more standard track of doing a thesis through the Theater department.

One of the main themes of “They Extract!” is the concept of love as the path to human salvation. The show depicts a somewhat emotionally dystopian society in which, rather than being denied, love is embraced in an uncannily capitalist way. In a world where fossil fuels have been exhausted, humans have managed to extract energy out of emotion; thus they attain a society that literally cannot function without love, but for all the wrong reasons. They have come to depend on love for material sustainability rather than for a human experience that provides refuge from the harsh reality of the world.

“It’s not an experimental piece, because it has a very clear plot,” Sanchez-Eppler said. “It’s a magical realist piece and so functions in a different logic than our own world, [and] there’s also the separate logic of the theater in which characters can be more expressionistic.”

If one does not give it adequate attention, “They Extract!” may seem like a play that lacks focus. Given its highly unusual characters and their method of performance, the show requires that its viewers engross themselves and pay attention to the subtle, rich details in the characters’ movements, which shed light on their notions and understandings of love.

The intensely different world in which the play’s characters find themselves renders them far quirkier than one would expect. From the integration of seemingly random dance moves in the dialogue to the continuous breaking of the fourth wall, the characters’ actions add as much humor as they do an exploration of the various complications of the commodification of love.

“[I] wrote it and definitely directed it as a funny show,” Sanchez-Eppler said. “[The point of it is] finding balance between humor and the painful truth of the world.” 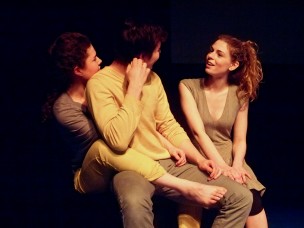 Theater at Wesleyan is no stranger to allegorical pieces that bizarrely resonate with profound truths in our lives. Though occasionally a tricky performance to follow and understand, “They Extract” ultimately performs this truth brilliantly. It is a fantastically strange play that strikes a powerful balance between formal experimentation and thematic clarity.

This is done particularly well through the character of Woolen, who was played by two actors simultaneously. Sanchez-Eppler explained that the two bodies were meant to portray the emotions that rarely surface from face-value physical expression. Woolen was the highlight of the play due to how Matt Catron ’16 and Connie Des Marais ’17 seamlessly came together as one hilarious yet immensely thought-provoking entity.

Despite the excellent quality of “They Extract!” I experienced a few production-related issues, especially as an audience member who was sitting in the far back. With the exception of a doorway and two cubes that acted as chairs, the set was sparse. On the one hand, this enhanced the experience, as one could focus more on the characters’ performance and the emotions were able to come out in a raw and authentic manner. On the other hand, this made it quite difficult to stay engaged for the entire hour and 30 minutes of the play, as the stage was aesthetically very plain. Furthermore, the sound production in the recorded video and audio sequences was somewhat lacking for the audience in the back; I could not always properly hear the dialogue, which affected my understanding of important plot points. Additionally, while their acting was stellar, the actors’ projection was not always loud enough to reach the entire audience.

Ultimately, however, “They Extract!” succeeded in the richness of its subject material.

“It’s a love story, but it’s absolutely not a love story,” Sanchez-Eppler said. “[It’s about] how that label of commodity does a kind of damage to the gifts of the world.”

“They Extract!” is a play that requires your urgent and pure attention. Though definitely humorous, it is not a show one should expect to take lightly. Rather, Sanchez-Eppler has successfully managed to provide us with a narrative that, while often difficult to follow, demands to be heard and immensely rewards those who take the time to actually listen.