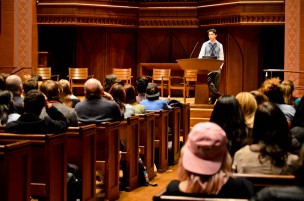 On Wednesday, Nov. 20, over four hundred students, faculty members, and community members attended the third annual Wesleyan Thinks Big event. Held once per semester, the event provides five professors from a wide range of departments the opportunity to give a 10-minute lecture about what keeps them up at night.

Professors are nominated and selected by the students, who comprise the Wesleyan Thinks Big organization. According to one student coordinator, Wayne Ng ’16, the lecture topics do not have to relate to the professor’s specific discipline.

“When I went to Wes Thinks Big as a freshman, it was the culminating point of why I chose to go to Wesleyan,” Ng said. “Originally, I didn’t know what I wanted to major in. I came to Wes Thinks Big and felt like I could take any path and do so many things with it.”

Mahurin gave the first lecture, titled “What We Talk About When We Talk About Clothes.” She began with a passage from Zora Neale Hurston’s “Their Eyes Were Watching God” in which the main character, Janie, stirs up a group of townspeople when she wears dirty, revealing overalls. This passage guided Mahurin’s discussion of clothing and her observation of articles of clothing that she had overheard being mocked on campus, such as crop tops, high heels, and hoop earrings. Mahurin pointed out that most of the comments are directed at females.

“I have never once heard anyone at Wesleyan mock the shirt worn by a man,” Mahurin said.

She expressed her aversion to the colloquial term “biddie” that she had heard students use in reference to some women on campus. Students, according to Mahurin, define a “biddie” mainly based on the clothes that a student wears. She suggested that students focus instead on what women have on their minds.

Next to speak was Hughes, whose lecture, “Life in the Universe,” detailed the current search in science to find life outside of Earth. She opened with a startling new astronomical discovery that sparked many gasps from the audience.

“Within the last few weeks…we now know that there is at least one planet per star and that at least one in five stars has a rocky planet like Earth on which water can exist,” Hughes claimed. “That’s literally billions of chances for life to evolve.”

Hughes believes that it is essential for scientists on Earth to continually send signals to space so that they can be in the right place at the right time for those signals to be heard.

While she emphasized the importance of government funding in the sciences, Hughes also pointed out that research in the field of space exploration, and humans as a race, are both very new. These two facts form the basis for the Fermi paradox, which she described as the contradiction between the probable mass of extraterrestrial life and humanity’s inability to discover it.

Cutler spoke next, giving a talk titled “What’s Left? An Unrequited Politics of Pleasure.” Cutler used a PowerPoint presentation to frame current American political party biases, suggesting that along with the obvious left and right binaries of our political system, there should exist a new axis that further bisects those categories into left and right communitarianism and left and right libertarianism. Cutler argued that the axis of the libertarian left has yet to be defined by an established party or policy.

“A left libertarian’s views would be especially anti-work…so if you’re in the market place as a labor person, you will want more money and less work,” Cutler said. “If we think about what the liberal right think about that box, they are freaked out by all the pleasure they imagine happening in there.… Let’s give them something to talk about.”

Next to speak was Roberts, whose lecture “Jury Duty, Stem Cells, and Global Warming: The Importance of a Science in the Liberal Arts Education” made a case for why all students should take at least one science course over their four years in college. She pointed out that while 75 percent of students at the University take a dance class, only 25 percent take a science course. Roberts also encouraged scientists to make their subject teachable and translatable to non-science majors.

“Take a science course,” Roberts concluded. “Learn to love the detail…. Fulfill your NSM requirements. Come over to the south side of Church Street. Ask us what we love to do. We would love to tell you.”

Irani’s lecture was the last of the series; the title was “The Value of Learning.” Irani explored how modern students perceive learning and their belief that learning is intrinsically valuable as well as instrumentally valuable.

“Why are you and I here at this institution?” Irani asked. “Here’s the easy answer: I’m here to teach and you’re here to learn.  That’s the consumer model of education…. But knowledge is not best thought of as a good to be consumed.”

From there, Irani detailed the view that some goods, such as personal health, are valued as ends in themselves, while other goods, such as medical treatments, are instead valued as means to an end.  Irani noted that while in college, it is difficult to perceive your time spent as intrinsically valuable.

“While you’re here there is one precious thing that you’ll never have again: freedom,” Irani said. “And by that I mean the freedom to think, the freedom to engage in the independent thinking that is necessary to take ownership of your values.”

After the lectures, Cutler expressed his agreement with Irani’s lecture.

“I like to think big because…as Professor Irani was saying, the point of this place is not that it will make you a lot of money, although it hopefully will,” Cutler said. “All you need to do is learn to read and write in order to get what this place sells. Go deep wherever this place takes you.”

Emma Davis ’17 commented on the capacity of the audience to remain open-minded regarding all lecture topics.

“I am so glad I came because I think this distills the best of Wes into short, 15- or 20-minute segments,” Davis said. “I also think that it was an invigorating challenge to the audience, who could have tuned out because [each lecture topic] wasn’t where [they were] usually comfortable, but being able to be present for the entire thing was proof of what makes a liberal arts education so valuable.”