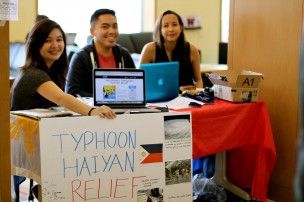 In the aftermath of Typhoon Haiyan, students have come together to raise money for the Philippines, which has seen a death toll of at least four thousand in the last month due to the storm. The effort, spearhead by the University’s Filipino club, PINOY, is called “Walang Iwanan: Typhoon Haiwan Care,” creating the acronym “WITH Care.” In Filipino, “Walang Iwanan” means “no one left behind.”

Before PINOY devised a fundraising strategy, however, two students unaffiliated with the group began fundraising independently in the Usdan University Center. Over the course of one meal, Zachary Burns ’14 and Zander Nassikas ’14 raised approximately one hundred dollars.

“I couldn’t believe it,” Nassikas wrote in an email to The Argus. “I quickly looked up how many had died in Katrina, and saw that it was 1,850. Still a disaster, but this typhoon was clearly a disaster on another scale[…]. Zach said he would read up on it. He then called me that night and said, ‘Zander, we’ve got to do something about this. I want to do something. Nobody else on campus has organized any kind of relief yet.’ I said, ‘I’m in.’”

Burns and Nassikas were moved to action not only by the devastation in the Philippines, but also by the need to fight climate change.

“It is meteorologically certain that a warmer atmosphere, induced by human activity, allows more moisture to collect before it condenses to rain and snow; a warmer atmosphere also creates the conditions for amplified wind speeds,” Burns wrote in an email to The Argus. “[…]We see our consumptive lifestyles translated into tragedy in Southeast Asia. The link is no longer speculative, and we must act.”

As Burns and Nassikas began to fundraise, Gabriella Montinola ’17 and Mikaela Reyes ’17, both of whom are from the Philippines, were struggling to find a way to help.

“I think feeling helpless was the biggest thing that got to me because it felt like the moment that my country needed me most, I was away for the very first time,” Montinola said. “Mika [Reyes] and I are very used to doing relief efforts…. The part of the Philippines that we’re from is the capital, and there’s a very small portion of the Philippines that’s very rich, so sometimes I feel like we have an obligation to serve our country and help those that really can’t afford to.”

Reyes experienced similar feelings of helplessness, particularly because this typhoon was more severe than those that frequently affect the country.

“[A]t first I was like, ‘Oh, it’s another normal typhoon’…but then a lot of people were saying that this one was much worse than in the past, and that got me more worried,” Reyes said. “You feel helpless, especially because you’re so far away from home. I guess that’s why we started talking about it and thinking about what we could do from so far away.”

However, Montinola explained, because she and Reyes were in a new environment, they were not sure of how to approach this task.

“We’re freshmen, we’re not from America, [and] we don’t really know how things go, so we were sort of struggling to figure out what might work,” she said.

Montinola and Reyes spent an afternoon getting advice from the Dean for the Class of 2017 Louise Brown, Associate Dean for International Student Affairs Alice Hadler, and Director of Student Activities and Leadership Development Elisa Cardona before eventually taking the matter to the PINOY group.

“PINOY generally raises awareness of not just the Filipino culture, but also the issues that the Philippines is going through,” Enverga said. “As a third-world country, there’s a lot that needs to be covered, and there’s a lot of help that can be given to the country. Things like poverty, corruption, improving education.”

PINOY partnered with Burns and Nassikas and decided to raise money for the United Nations Children’s Fund (UNICEF) and a local Filipino organization called One Million Lights, which distributes solar lights to areas in the Philippines in need, such as hospitals.

“We chose UNICEF because we liked the fact that they were catering towards children,” Enverga said. “The turnover of the donations was really fast and is really transparent, which we didn’t really see in a lot of other organizations, such as the Red Cross. They also have this online platform that we could piggyback on.”

Kirsten Rischert-Garcia ’17, another member of PINOY, helped set up the online donation platform so that students would have an option other than donating cash at the tables in Usdan.

“I was really excited to help out because in high school I did a lot of stuff with natural disaster relief,” Rischert-Garcia said. “I actually started because there was another typhoon in the Philippines a while back called Typhoon Ondoy, so in high school I organized a fundraiser for that.”

The first fundraising goal is to raise $5,000. PINOY will attempt to achieve this goal by soliciting donations in Usdan, hosting a Filipino Late Night, and holding a benefit show. Enverga noted that there was an overwhelming outpouring of support from other on-campus groups wanting to participate in the benefit, such as a capella groups, bands, dance groups, and other cultural groups.

“It’s not something that we usually see at Wesleyan, that all these parts of campus come together for something,” Enverga said. “…It was so exciting having everybody so motivated about this one thing.”

The benefit, distinct from the Filipino culture show that occurs every spring, will take place after Thanksgiving break. The precise date has yet to be determined.

“Despite circumstances, Filipinos know what hardships are like, so they know how to get back and deal with it and make sure that they have that happiness still,” Enverga said. “That’s something that we love to share.”

Rischert-Garcia emphasized the motivation and positive attitudes of students involved in fundraising.

“You’d think that after something so traumatic, people would be low energy or not know what to do,” she said. “It’s awesome that we all feel really empowered to make a change and help out.”

Enverga expressed agreement with this sentiment.

“This event just sparked something in everyone,” he said. “It’s just incredible.”