How I Met My Major 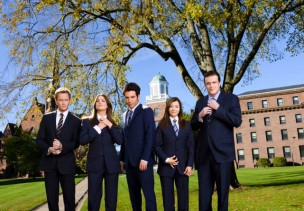 Kids, this is the story of how I met my major. It wasn’t easy. I wasn’t one of those guys who walked into college knowing exactly what I wanted with my life. It took some time to figure out. Three semesters, actually.

Sure, you’ve heard the short version of how I earned my Bachelor’s degree. But this is the long version. Once upon a time, before I was a “dad” or even a “graduate,” I had this whole other life. It was way back in 2012. I was a freshman at Wesleyan University.

I was living in the Butterfields with my first roommate, excited about exploring the full breadth of the liberal arts experience, but then course registration screwed the whole thing up.

Some of my friends already knew where they were headed in life. My roommate that first year had it all planned out: he met his major the second week of school, when he realized how much he loved his FGSS and Economics cross-listed class. I just had no idea. Normally, people tell you to just take what classes might help you with your career, but liberal arts is so go-with-the-flow. Barely anyone has a career path laid out, they tell you. But all the students you meet have something in mind. I swear, everyone I met seemed to be just flaunting their perfect internships and perfect theses and perfect lives.

When it came time for me to apply for an advisor, I just listed all of my interests, everything from anthropology to psychology to, well, anything with –ology at the end. They gave me someone from the English department. Go figure. She told me to get my GenEds out of the way and go from there, but I’m not really into one-semester stands. I was looking for some meaning, and I just couldn’t find it in “The Universe.”

But I figured that four months wasn’t too much of a commitment, even if I wasn’t totally devoted to the classes I was taking. I tried out a humanities class, but there’s only so much poetry you can read before it stops being romantic. Not to mention that the conversations got so convoluted, I wasn’t even sure we were still speaking the same language. SBS didn’t work for me, either. It was too political, and the patriarchy just bums me out. Oh, and there was a brief fling with “Intro to Programming,” but that didn’t last long at all. After the first problem set, BDNSM just hurts too much.

There I was, nearing the end of my first semester, and I still had no idea what type of major I was after. I felt like I couldn’t just keep taking intros and survey courses, and my advisor was beginning to get nervous. “You never call, you never email,” she said. “When will you finally just settle for a nice Jewish and Israeli Studies certificate and write me a thesis?”

So we made an appointment to sit down one afternoon with WesMaps. And that’s where I found her.

I didn’t know her last name at the time, but her first name was “Temporality.” And it was the most beautiful thing I ever heard. She was interdisciplinary, and that was new and exciting. I ranked her at number one and left the rest to fate.

But fate is a cruel mistress. My course registration results came back a week later, and she was nowhere around. I was devastated. I had seen my future with her. After her, how could I settle with “International Politics” and “Intro to Experimental Music”? Everything else just felt so shallow. And I was only given one day of adjustment before the school threw me back into the field. What I wanted was a period of mourning, but you can’t cry over filled classes.

I got myself together. I tried to make the best of Drop/Add. I sat in class after class to see if it was right for me, but how do you figure out if a subject is the one after only an hour and a half? Let me tell you, kids, it’s an impossible task.

I reached a new low. After a week of shifting my schedule around, considering a reduced course load, and flirting with pass/fail, I found myself sitting at my desk, alone, on a Friday night. My friends were all happy with their four selections. My roommate had even added a fifth on top of it all, just so he could fulfill his requirements sooner. And there I was, refreshing WesMaps every other minute. I don’t know what I expected: the perfect class to be created out of thin air? I almost accepted that I might spend another semester with no focus, no passion, no true academic love.

Out of sheer despair, I clicked on “Temporality” one last time. That’s when I saw it: an open spot.

I couldn’t believe it at first, but I gathered myself together and clicked “add.” I emailed my advisor. I emailed the professor. I went to the very next class. And I fell in love all over again.

Over the next two semesters, all I knew is that I wanted to spend the rest of my college life with “Temporality.” I devoted myself to every class in which she appeared. My friends all found her fascinating. Even my advisor approved.

The spring of my sophomore year, I finally declared. I would build my academics around her in the way nobody had ever done before. I proposed to be a University Major.

The next two years were a whirlwind. I shaped my major without even caring about how I would use it after graduation. I wrote my thesis and submitted it for honors. I even taught a student forum. We were so happy together, “Temporality” and I. We still are.

And that, kids, is how I met my major.