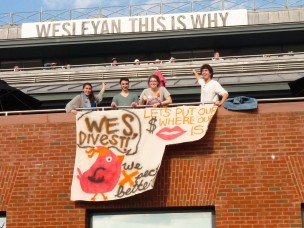 The Wesleyan Student Assembly (WSA) recently passed “Resolution 5.35: Fossil Fuel Divestment,” which urges the University to divest from fossil fuels. The resolution, first introduced on Oct. 6 and passed on Oct. 27, proposes divestment as a means of furthering social and environmental justice on a financial level. Citing the University’s Climate Action Plan and its stance against the negative impact of fossil fuels, the resolution addresses the seeming hypocrisy of the University’s current investments.

“Wesleyan’s successes in fighting economic inequality and climate change risk negation by the impact of its financial decisions,” the resolution reads. “[It is ironic] that much of the research and learning at Wesleyan is directed towards fighting the very systems that Wesleyan supports with its endowment.”

In an Argus article published on Oct. 7, President Michael Roth outlined the process a student interested in changing investment policies should take.

“We have talked a little bit about it in the Investment Committee,” Roth said. “What I’ve said to the students with whom I’ve met is that the best thing to do is to work through the Committee for Investor Responsibility [CIR]. I think it would be good to have something in writing, a memo of some kind, that explains the rationale for changing our investment policies in this regard.”

Now in its second semester, Wes, Divest! has worked with the WSA throughout October to draft and generate support for the recently passed resolution.

The resolution was sponsored by WSA members Kate Cullen ’16, Scott Elias ’14,  Aidan Martinez ’17, Angus McLean ’16, and Ben Marvin-Vanderryn ’17, as well as Wes, Divest! member Zachary Wulderk ’15, and passed by a vote of 20 in favor, 6 opposed, and 5 abstained. Cullen described the motivation behind the introduction and adoption of the resolution.

“The goal is to a) get the conversation started, b) make sure CIR plays a larger role in these conversations and has more power and sway in the administration, [and c)] to get the board talking about it… to really just have a tangible piece of paper that says, ‘This is what students think; let’s work together to make this happen,’” Cullen said. “And hopefully through different discussions and education efforts we can get the Board [of Trustees] and President Roth and other administrators to understand how important [divestment] is.”

The resolution discusses the socioeconomic implications of condoning the use of fossil fuels, the production of which disproportionately afflicts minority and low-income populations. To highlight the University’s commitment to the endowment as a means of social change, the resolution listed conscientious divestments the University has made in the past.

“Wesleyan has taken a pretty clear stance that climate change is an injustice, but as of now, it’s totally complicit with that injustice, so this offers us the chance to validate this university’s mission,” McLean said. “As Michael Roth said, we should be a responsible institutional citizen, and this is the way to do that.”

The resolution also acknowledges the validity of the University’s financial concerns about divestment, which are feared as added strains on the endowment. The University’s endowment is lower than those of many peer schools.

While some believe this financial pressure factors into the University’s current policy of retaining holdings in fossil fuels, other students argue that divestment would ultimately prove financially wise. Wulderk explained the group’s rationale behind encouraging divestment even in light of the potential financial risk it poses.

“One of the biggest arguments that we hear against [divestment] is a financial argument…but a lot of us actually think that this might be beneficial financially in the long run for Wesleyan,” Wulderk said. “There’s the strong possibility, if not the fact, that there will be a carbon asset bubble, which means that a lot of the reserves that these fossil fuel companies have will become stranded.”

“These companies are currently overvalued because the possibility of stranded assets is not fully taken into account, so the companies that we are invested in could very well lose value, which would hurt our endowment,” Wulderk said. “By divesting from them not only are we fulfilling our moral obligation as an influential university, we are also making a sound financial decision.”

Divestment has become a hot button issue on campus; it leaves some students conflicted between their reliance on the endowment and their desire for environmental justice. Wes, Divest!, a student group founded in February 2013 by Pierre Gerard ’15, Cory Guilmette ’13, Rachel Lindy ’15, and McLean, comprises students who stand on the side of environmental justice.

“Divestment offers the University a unique opportunity to cement its place as a leader among peer institutions in sustainability,” McLean said.

After garnering over 350 signatures in an online petition for divestment, Wes, Divest! continues to maintain an active presence on campus by organizing a variety of events and campaigns in addition to its collaboration with the WSA.

Over Fall Break, Wes, Divest! sent a coalition of students to Pittsburgh, Pa. for PowerShift, a three-day conference that gathers youth climate activists from across the nation. During Homecoming/Family Weekend, the group dropped a banner in front of the Usdan University Center and hosted a party to celebrate Halloween and raise awareness about divestment.

The CIR, which comprises of students and faculty and advises the Investment Office, is in the process of preparing a report on divestment. The committee previously compelled the endowment’s divestment from arms contractors in Iraq. In the meantime, as the resolution states, the WSA hopes to open a dialogue with the administration and increase transparency about the issue.

“[The WSA]…requests that the Wesleyan Investment Office release to the Committee for Investor Responsibility for dissemination to the Wesleyan community quarterly updates, both detailing progress made towards full divestment and providing information on the holdings of the endowment pool and of index funds within the General Endowment Pool,” the resolution reads. “[It] urges President Roth to add divestment from fossil fuels into Wesleyan’s climate goals [and] requests that should any of the aforementioned proposals be rejected, the Wesleyan Finance Office or Investment Office provide the WSA a rationale to be made public to the Wesleyan Community at large.”

Wes, Divest! plans to further bring divestment to the attention of the University by meeting with the Board of Trustees during the week of Nov. 22. While in the long term the group is aiming for complete divestment, its members accept that the latest resolution may be primarily symbolic. Nonetheless, Gerard sees value in making a statement to the student body.

“If we [have] a primary objective, it’s to educate,” said Gerard. “With education comes change.”

Sonia Max ’17, a member of Wes, Divest!, noted that the University’s currently policy is inconsistent with classroom teachings.

“I’m taking an Environmental Studies class and learning the effects of fossil fuels,” Max said. “It really frustrates me to be learning this from professors who are at this institution, [while] the actual values of the institution aren’t being reflected. There’s just a disconnect; there’s a lot of hypocrisy going on. And it makes me feel uncomfortable. It’s almost as though, because they’re not divesting, they’re making what we’re learning not as big of an issue as it is…And it makes a student feel confused.”