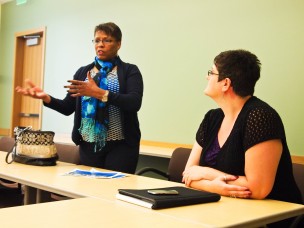 In an effort to raise awareness about the upcoming blood drive in October, Phi Beta Sigma and Wesleyan Blood Drives co-hosted a Blood Drive Information Session on Thursday, Sept. 26, in Usdan 108. This week’s info session was a part of Sigma Week, a series of events hosted by Phi Beta Sigma to promote the fraternity and to encourage community and service learning on campus. Other events included a Freshman 101 panel, a Greek Game Night, and a visit from the street clothes vendor Superego Clothiers.
The theme of this year’s Sigma Week was “Speeding on to 100,” in honor of the fraternity’s 100th nationwide anniversary on Jan. 9, 2014. Phi Beta Sigma, Inc., the umbrella organization to which the Wesleyan chapter reports, was started at Howard University in Washington, D.C. and is dedicated to “brotherhood, scholarship, and service,” according to its mission statement. It has traditionally served African American young men but is open to students of all ethnicities.
The Wesleyan chapter of Phi Beta Sigma was founded in 2007 but currently has only two members on campus, President Everton Laidley ’14 and Vice-President Morgan Hanson ’14. However, Laidley and Hanson hope to attract new members over the course of the year and will continue to maintain the fraternity’s presence through various service-related events. This Saturday, Sept. 28, the Sigmas will be co-hosting a “Get Fresh” Brotherhood Dinner with Invisible Men in Albritton 311.
This week’s event was coordinated by Laidley and Wesleyan Blood Drives member Silvia Diaz-Roa ’15, who is also an American Red Cross Ambassador and has been involved with the blood drives on campus since her freshman year. Though she herself is ineligible to donate, Diaz-Roa sees helping with blood drives as the next best way to give back to the community. As a pre-med major, she enjoys the opportunity to help save lives.
“You can actually save so many lives just by one donation,” Diaz-Roa said. “It’s sort of like a win-win for people who donate, because not only are you helping other people, but you’re helping yourself. You’ll feel better about yourself, and if you ever need blood, they’ll have blood because of people like you who donated.”
However, for those like Diaz-Roa who are unable to donate blood, there are a variety of other ways to contribute to the blood drives.
“You can volunteer on the day of the drive, which is only a small time commitment, maybe an hour, and that’ll be just signing people in or giving out food or something,” Laidley said. “I think once people find out why [donating blood] is important and why it could impact even their own lives, then they’ll be more compelled to give.”
During the information session, American Red Cross representatives Joyce Ramsey and Kimberly Moreland discussed the constant demand for blood, but more specifically the need for diverse blood types.
“Why it’s so important for men of color and women of color to really get on this bandwagon is that there are unique donors and rare blood types in [their] community,” Ramsey said.  “If I’m a sickle-cell patient, and I’m looking for a donation to sustain my life, I’m going to do and fare much better with [a donor] of my own ethnicity…. The best matches occur when the recipient and the donor share the same ethnic background.”
To further underscore the value of donor diversity, Ramsey cited a statistic about the predominance of the O blood type among blacks and Hispanics in the United States. The O blood type, which is universally accepted by persons of all blood types, is present at a rate of 53 percent among Hispanics and 47 percent among blacks, as compared to 37 percent of Caucasians and 39 percent of Asians.
“[Type O] is the most needed by hospital patients,” Ramsey explained. “That’s the first blood type that [the doctors] are going to reach for when they’re treating for cancer, for accidents, for a whole host of things.”
However, as Moreland noted, blood donations across the board are currently in decline. She appealed to younger donors in particular to help combat the shortage.
“Blood collections are down; we are struggling to get collections,” Moreland said. “Not only do we want people to give more than once, but we want those people who are young enough, eligible, and healthy to come forward…. If it’s your first time, just come out and try it. If it’s not for you, it’s not for you. But you’re never going to know until you try.”
Fortunately, despite a low turnout at the Blood Drive Information Session on Thursday, the University’s contributions have increased steadily over the last few years, with 245 pints collected in 2010-2011, 346 pints in 2011-2012 after a third blood drive was added, and 355 pints in 2012-2013. The next blood drives will be held on Oct. 16 and 18 from 12 p.m. to 5 p.m. and donors are encouraged to sign up in advance at redcrossblood.org with the code “wesleyanu.”