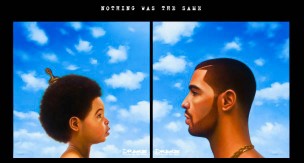 After the pretentious disaster of inaccuracy that is “Started From the Bottom,” I was feeling highly pessimistic about Drake’s new album, Nothing Was the Same. I have been a massive Drake fan since the very first song I heard of his: “Miss Me” from his debut album, Thank Me Later. Despite the mass popularity of his second studio album, Take Care, I was personally disappointed. While it made me begin to question my all-consuming love for the rapper, Nothing Was the Same has brought the faith firmly back.

What struck me the most about Drake as a rapper when I began listening to Thank Me Later was the sheer emotion he conveyed. In an industry dominated by fame-and-fortune-obsessed maniacs all claiming to be artists and trying desperately to prove that they have more of everything than anyone ese, Drake was an incredible breath of fresh air. Here was a rapper hitting the mainstream that actually had the audacity to go into personal issues rather than exploit the cliché track of obnoxious bragging.

However, not long after the release of Thank Me Later, it seemed as though Drake could no longer be distinguished from your average rapper on the market. While Take Care definitely had some fantastic tracks that few other rappers would even bother to pull off, it was also laden with an overwhelming amount of downright bragging. The essential source of Nothing Was the Same’s beauty is the way in which Drake seems to have finally balanced the two.

There is definitely no shortage of the usual kind of bragging on the album. However, it is more than equally balanced by tracks that speak of struggles and raw emotion. A track like “The Language,” talking about “bank account statements [that] just look like I’m ready for early retirement” and “smoking and fucking,” is immediately preceded by a track like “Connect,” speaking of an ex wanting to “run over my feelings like she drinking and driving in an 18 wheeler.”

While Take Care had a similar kind of diversity, Nothing Was the Same trumps it in this regard with the way that even its “bragging” tracks have interesting underlying themes, such as the intro of “Pound Cake,” which talks about the difference between the industry in the old days and now.

In the case of the beats, with the exception of the single “Started From the Bottom,” there are no tracks that feel generic or blend into the rest of the hip hop scene. If you don’t care about the lyrical quality of the album, which would mean missing out on a great deal, then the uniqueness of the beats should be sufficient enough to give the album a chance. This uniqueness is only enhanced by Drake’s consistently unique and unparalleled way of ingraining singing with his rapping, which comes out beautifully in tracks like “Own It” and “Furthest Thing.” He takes it to another level this time with a purely R&B track, “Hold On, We’re Going Home,” one of the lead singles, although one without any mix of his usual rapping.

Overall, Nothing Was the Same is simply a delight. While not exactly ground-breaking or game-changing, it signifies Drake’s return to breaking conventions. With the exception of the horrendously obnoxious “Started From the Bottom,” the album is a musical and lyrical achievement that more rappers should be looking up to.