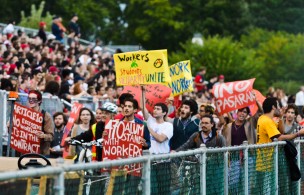 At the first night football game in NESCAC history on Saturday, Sept. 21, a number of students marched around Andrus Field to protest the working conditions of the University’s custodial staff. This event follows a string of protests over the summer during which custodians protested their working conditions. The protests were directed at the University and Sun Services LLC, the company contracted for the University’s custodial work. Sun Services recently reduced the number of cleaning staff by 10 workers; this means that fewer custodians are now responsible for cleaning more square footage throughout the campus.

This rally was organized by the United Student Labor Action Coalition (USLAC) following a worker-student solidarity meeting held on Friday, Sept. 20 in 200 Church. Bilingual attendees provided translation so that Spanish and English speakers could understand one another. Ari Ebstein ’16, a member of USLAC, commented on the purpose of Friday’s meeting.

“It was basically a space for workers to kind of air their grievances about the over-burdensome shifts that have been put on them,” Ebstein said. “We went ahead trying to orchestrate [the rally at the football game].”

Approximately 30 community members, including students, Bon Appétit workers, and Middletown residents, joined the rally around the football field. They dropped two banners from the Public Affairs Center, which read “Solidarity” and “Solidaridad”; they also distributed fliers that detailed a day in the life of a University custodian and asked whether this workload can be reasonably completed in seven and a half hours.

Mariama Eversley ’14, an attendee, explained the rationale behind protesting during the football game.

Eversley added that she found the setting of the football game provided an interesting context for a rally about labor conditions.

“Personally, [I wanted] to interrupt an event that is very complacent,” she said. “There was certainly no intention of disrupting the football game. But just to interject the reality that the workers’ lives are very, very tough right now, in a moment like this, I personally thought was a powerful thing to do.”

Ebstein received a range of reactions from football game attendees.

“I had people who were very sympathetic to the cause [and] other people who mocked me because I am personally not a custodian, and they said, ‘How can you possibly claim to be standing in solidarity with custodians or other workers at Wesleyan?’” Ebstein said. “Most people were just genuinely unaware of the issue because these are people who mostly clean in the night when they’re not around, or the alumni aren’t on campus, so they were interested in the civic action. Most, I think, wanted to know more and were just unaware of what’s been going on.”

Eversley emphasized that the event was not just a student protest.

“I thought that made the experience more powerful, just to have a lot of people with different experiences together just rallying for workers’ rights and for people to not have an unmanageable and highly exploitative workload, which is what is happening right now,” she said.

USLAC will hold an organizing meeting on Tuesday, Sept. 24 at 5 p.m. at the University Organizing Center.

“We’re just trying to organize as broad-based a coalition of students as possible to stand in solidarity with workers and see if we can’t use whatever influence we have as participants in this University to do some good,” Ebstein said.