Palindromes Dominate the ’92 Stage In “Yawn a More Roman Way” 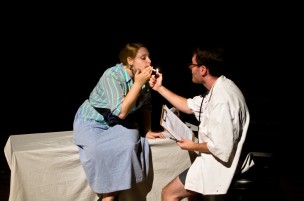 There’s a play written exclusively in palindromes: are you curious yet? As it promised, “Yawn A More Roman Way” delivered fifty minutes of dialogue entirely in palindromes. Indeed, the absurdist experimental production written and directed by Coz Deicke ’15 presented a theatrical experience unlike any other, making for an incredibly unique project. However, it wasn’t without shortcomings.

While palindromes powerfully enriched the play’s dialogue, they acted as double-edged swords. Dialogue proved highly difficult to keep up with at many times, and a good number of the significant plot points were occasionally lost in the audience’s attempt to keep up with it. The dialogue between the characters at numerous points felt both forced and unconvincing, as though they were aware of their situations rather than naturally experiencing them. While this may have been intended as part of the humor that comes along with the palindromes, the humor wasn’t always conveyed successfully. 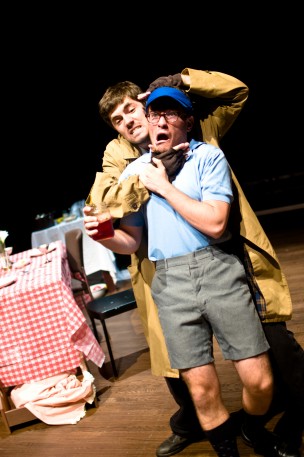 Furthermore, the plot was, to say the least, highly confusing and, for the most part, a challenge to follow. While its non-linear progression excellently accented the overall unorthodox nature of the play, the audience, even at the end, was left without an understanding of what happened.

Ambiguity certainly has its merits, but not when such confusion fails to provide a further meaning for the audience. In addition, there were a few plot points that were overly nonsensical and did not seem to add anything substantial to the production, including the appearance of a dog deity. These issues, paired with the very hazy relationships between some of the characters, caused a great portion of viewing the play to be spent in plain confusion.

The play is still impressive. The overarching theme of insanity, ingrained in virtually every scene, was reflected tremendously. Highly minute details brought the characters to life and brilliantly absorbed the audience into their small peculiar worlds, particularly fruit obsessions in the form of papaya fights and banana addictions. Not to mention the sheer intelligence of the palindromes, which were always present. The excellent consistency of symbolism expressed through repeated objects, movements, and, of course, palindromes not only greatly contributed to this insane play world, but also defined an unparalleled joy in being an audience member.

The small cast of four, consisting of Amanda Sonnenschein ’14, Maddy Oswald ’14, Christian Schneider ’14, and Matthew Krakaur ’14, had known and worked with each other for a significant amount of time beforehand; all have acted at The University since their first semesters. None had actually done such a production before, and neither had Deicke, making it an absurdist debut for the entire crew. They stated that it was highly challenging for them to pull it off given the time crunch (rehearsal time was only two weeks) and the emphasis on physical movement to supplement the dialogue. Deicke himself was initially inspired by the prospect of palindromes during his freshman year, and so did not find it that difficult to actually write the play.

No matter what flaws it has, Deicke’s “Yawn a More Roman Way” maintains literary ambition. It is by no means a disappointment, being the first of its kind to be produced at the University, and will surely delight even more audiences if it is ever revived. With a little more time for preparation and polishing, the play would have probably not suffered most of its debut issues.