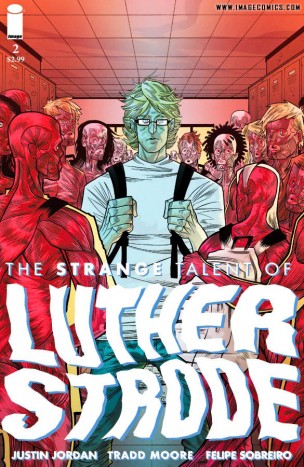 One of the most critically acclaimed comic book miniseries to come out of 2011 was Image Comics’ “The Strange Talent of Luther Strode.” For those unfamiliar with the Justin Jordan-written six-issue run, it followed Luther Strode, a high school student who discovers “The Hercules Method”; an obscure exercise handbook that soon exceeds his wildest expectations by allowing him to unlock superhuman strength. He then decides to channel his newfound skills by trying to become a superhero, all the while being hunted by a mysterious, ancient organization of similarly endowed beings. What resulted could essentially be described as an exaggerated version of Kick-Ass; it is surreal, funny, and ultra-violent to a degree you’ll have to see to believe.

That said, it was all a hell of a lot of fun, even if it all built up to a tragic conclusion.

Cut to 2013, and we now have the second part of the series, “The Legend of Luther Strode.” Several years later, Strode has pretty much lost his mind and become a hulking, shadowy force of brutal, berserk justice. However, everything changes after two new forces step into the fray.

The first is Michael Hill, a mob boss who’s decided to throw everything he has at Strode in order to take him down once and for all, enlisting the help of a mysterious superhuman biker by the name of Binder, whom  we soon learn is actually part of that same ancient organization from the first series—with sinister plans for Strode.

The second key player is Petrea, Strode’s estranged girlfriend. While disturbed by the events she witnessed in the last saga, she still cares deeply about Strode and is desperate to somehow bring him back from the abyss.

The plot across the six issues is actually reasonably sparse. The characters are fleshed out just as much as they need to be, while the mythology of their world is explored a little more in the third issue.

But for the most part, this series’ focus is on its action. In a lesser comic, this would amount to an overabundance of muscle-bound dudes exchanging blows, and (admittedly) there are moments where the Strode’s fights feel a tad reminiscent of an old Dragon Ball Z episode. However, the comic feels a lot smarter than it could have felt, largely through its smart dialogue and the author’s decision to revolve the story more around Petrea, who ultimately becomes the most interesting character and bonafide, ass-kicking heroine in her own way.

Fortunately, even with all of the action on the page, artist Tradd Moore can draw fights like no one else I’ve ever seen. His artwork is impeccably detailed and manages to convey movement perfectly. Whenever Strode takes on his enemies, these sequences almost have the feel of a well-choreographed dance, expressing every move of every player in a way that even most modern action movies are lacking.

Be warned, though: this is an incredibly violent comic. In the third page of the first issue, someone is punched through the head, and from there it only gets worse, with dismemberments and disembowelments aplenty. But the ludicrous nature of the violence is part of the fun, as things just get crazier and crazier, culminating in an amazing confrontation between Strode and the mummified remnants of Jack the Ripper. (Don’t worry; it’s nowhere near as stupid in context as it sounds.)

While it may not offer anything profound or really all that cognitive, “The Legend of Luther Strode” is still a hell of a lot of fun. It’s clever when it needs to be, but really, it stands as a testament to how entertaining it can be to follow violence and chaos on the comic pages. So if you can stomach a decent amount of gore, it’s well worth your time and money to pick up the collected trades of both this and its predecessor and to keep an eye out for the forthcoming “Legacy of Luther Strode,” due some time in 2014.